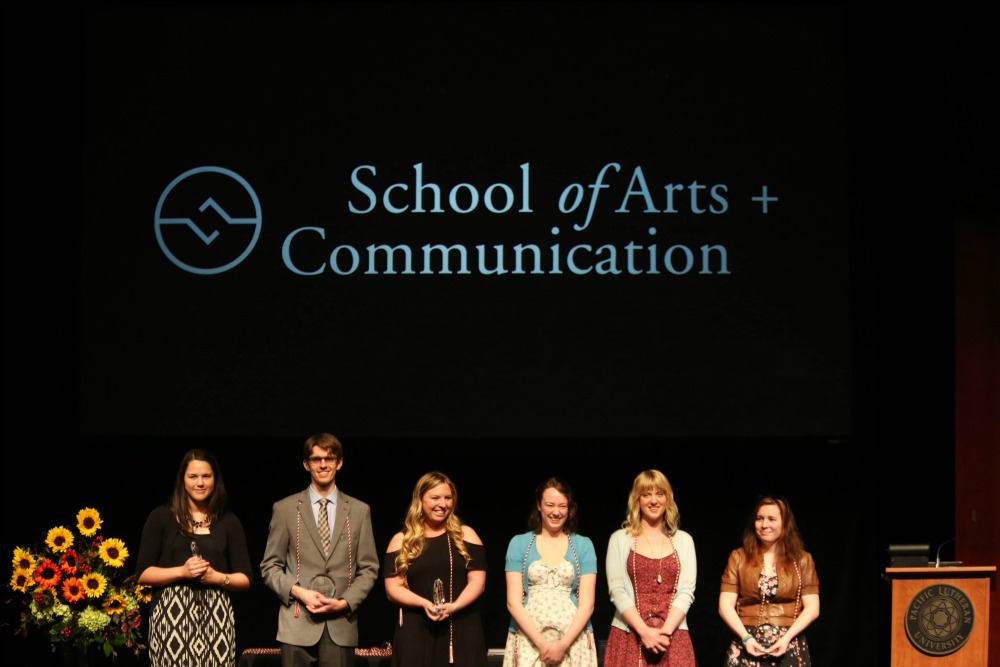 The School of Arts and Communication Dean’s Award for Excellence was awarded to six extraordinary graduating students on May 27, 2016, at the SOAC Recognition Ceremony. The Dean’s Award honors students for exceptional, tangible accomplishments, which could include:

Taylor has gone well beyond the curricular offerings in Art & Design and expanded her interest of digital work into her projects. She is a leader in the classroom and in the organizations to which she belongs. If ever there is a task to be done, Taylor volunteers. If there is a problem to solve, Taylor researches it. If there is a student in need of support–whether it’s moral, emotional, or educational, Taylor is there. Taylor’s work in ARTD 310 – creating a voter registration application, excelled. It impressed our outside guests so much that they continue to speak of “that project” as the project that defines the quality of work that we do at PLU. Taylor’s artwork will also be featured on the cover of the SOAC 2016-17 Events Brochure.

Sarah is one of our most hard working and creative students in Art & Design. Her craftsmanship in both materials and ideas is perhaps the most sophisticated and well developed across mediums that faculty have witnessed from any recent student at PLU. Over the last four years, Sarah has engaged in leadership roles, given many hours of valuable volunteer service, participated widely in functions across campus, and has provided a standard of excellence among her peers at the university.  She received First Place in the 2015 Juried Exhibition and Best in Show in the 2016 Senior Exhibition. She has also been a huge contributor and leader in the Empty Bowls effort, coordinating various departments & disciplines in this unified venture.

Sarah is a multi-talented theatre artist and leader – serving as President of Alpha Psi Omega and a valued member on the SOAC Student Advisory Board. She directed this year’s production of Night of Musical Theatre: Who I’d Be and has done a wonderful job with streamlining and increasing transparency of the student season selection process. Sarah has been a Mainstage fixture at PLU since her freshman year, with lead roles in Kiss me, Kate, Into the Woods, She Loves Me, 25th Annual Putnam County Spelling Bee, Goodnight Desdemona, Good Morning Juliet, and Our Town, and as Stage Manager for The Boys Next Door.  Sarah has also been a member of The Choir of the West for 2 years, and previously University Chorale and Singers.

Samantha has worked tirelessly to forge convergence among all of student media. This digital expansion has helped make PLU one of the most progressive student media operations in the state. In addition, Samantha has presented her research titled “Convergence: Just Do It” at a national convention in New York City earlier this year. Under Samantha’s leadership, the Society of Professional Journalists recognized Mast Magazine during its inaugural year as a finalist for the Mark of Excellence regional awards. Last fall, The Mast newspaper received an 8th place award from the College Media Association (national competition).

She has been published in the News Tribune, the Olympian, Bellingham Herald, The Alaska Airlines Magazine, Beyond, Alaska Airlines.com, PLU Marketing and Communications website as well as in the Mast, Mast Magazine, MAST-TV and LASR radio.

Maxfield is a multi-talented singer, cellist and composer in the Department of Music and does it all with great humility. He performs extremely difficult music at the highest level. Max has been a regular cellist and mandolin player in the Jazz Ensemble and The Choir of the West premiered one of his choral pieces at their Spring concert. Max embodies all that our students strive to be. He was recently a standout performer in the North American premiere of Sandstrøm’s St. Matthew Passion, where he was a leader in the Evangelist quartet. Our faculty witnessed Max’s sharp attention to detail, his thorough research of the libretto and music, and his help organizing other students for rehearsals outside their normal class time.

Amanda has served and succeeded in high-profile MediaLab positions, including Team Lead on the Tacoma Public Schools account, and as chief recruiter for MediaLab, a demanding responsibility that requires organization, discipline, and diplomacy. Outside of PLU, Amanda excelled at her internship in the Communications Department in the Office of the Pierce County Executive. Among other duties, Amanda became a key Communications media-relations team member for the county during the July 2015 nationally televised U.S. Open Golf Championship Tournament at Chambers Bay. Her performance led to a permanent part-time job in the Executive’s office. In Fall 2015, Amanda was promoted to PR/Advertising Team Leader where she planned, organized and supervised the November premiere of MediaLab’s These Four Years documentary event at the Seattle Public Library. During this time she was also appointed MediaLab General Manager.