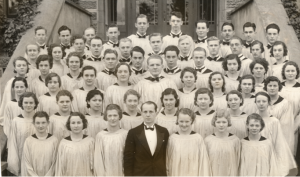 Pacific Lutheran University was the third Lutheran college to develop a nationally touring a cappella choir. In fall 1925, Pacific Lutheran College, home to nearly 150 students, hired a young St. Olaf graduate, Joseph Edwards, to head the music department. During the opening weeks of the 1926–27 school year, Edwards started trying out voices for the Choir of the West, a name suggested by an early tour manager of the choir. Despite a shortage of qualified singers, Edwards started building a choir that eventually became excellent.

The choir traveled regularly, often sang on the radio, and was critically well received. Throughout the 1930s the PLC Bulletin announced the special role of the Choir of the West: 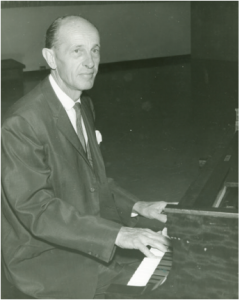 “This organization enjoys the unique distinction of being the only college choir west of the Mississippi specializing in a cappella music. Mr. Edwards was our Director of Music… [he was] one time a student under F. Melius Christiansen, director of the St. Olaf Choir… [Edwards built] the Pacific Lutheran Choir into an organization worthy of this illustrious teacher.” 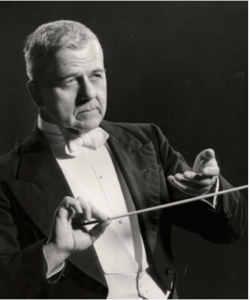 unnar Malmin came to Pacific Lutheran College in fall 1937. At first, Malmin struggled to keep the Choir of the West going — at one point, the number of male students was as low as nine. But the post-war years were a time of strong development for the choir.

Malmin said of it, “I have always believed that the a cappella choir singing sacred music expresses the highest ideals of Christian higher education, culturally and spiritually.” It was also a new singing organization that profited greatly from Malmin’s air for programming. Malmin knew his audiences and what they wanted to hear. The choir’s 1963 tour of Norway marked its peak of artistic attainment, as demonstrated by the reviews in many Scandinavian and German newspapers. 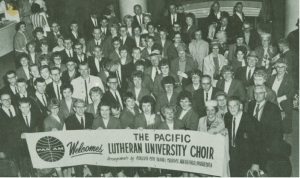 In fall 1964, Maurice Skones came to PLU as chairman of the Music Department and director of the Choir of the West. Skones was well prepared for his new role, having studied choral directing under Paul J. Christiansen at Concordia College in Moorhead, Minnesota. When Skones took over the choir, he immediately put his stamp on it. Although he maintained the choir’s historical tradition, he wanted to emphasize the choir as a concert ensemble. 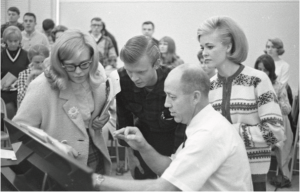 It was announced that the choir would present the world premiere of Hungarian composer Miklós Rózsa’s major vocal piece, The Vanities of Life. Rózsa, a friend of Skones, was a famous Hollywood composer (Quo Vadis, Ben Hur, El Cid, King of Kings) who had won three Academy Awards. The premiere was part of the Homecoming concert on Oct. 23, 1965. It was a critical success. Afterward Rózsa commented: “I am overwhelmed at how they sang. I had not imagined the work to be performed by memory… Mr. Skones is a true choral genius… This is one of the greatest choirs in the nation, with precision second to none.” 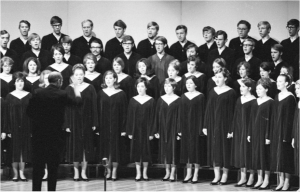 The cultural high point of the mid-70s was the May 1974 West Coast premiere of Polish composer Krzysztof Penderecki’s Passion According to St. Luke. Penderecki is one of the best-known composers of the late 20th century. Passion, which premiered in Europe in 1967, is considered his masterpiece. According to Mooring Mast reporter Judy Carlson, it blends Gregorian chant, folk music, nonverbal choir sounds and modi ed serialism in an eclectic style. The stage in Eastvold Auditorium was over owing with performers and the total effect of the music was extraordinary.

“There are many superior college 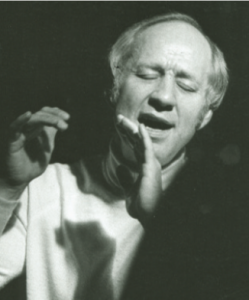 choir groups around the country, but not many of them would probably care to tackle the demanding and musically rich program offered by the Choir of the West… These young students from Pacific Lutheran University… not only surmounted almost every challenge splendidly, but also did [so] while singing the entire concert from memory.”

Richard Sparks came to PLU to conduct the Choir of the West in 1983. He was director for 18 years, after gaining an early reputation in Seattle founding and conducting Seattle Pro Musica (which is still going strong) and three years of 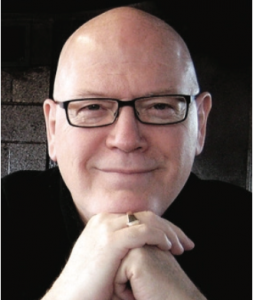 Under Sparks, the touring tradition of the choir continued with notable tours of the East Coast in 1986 (concerts in Minneapolis, Boston, New York, Philadelphia, Washington, D.C., North Carolina and Florida), England in 1988, Japan and China in 1991, Scandinavia in 2001, and many tours down the Interstate 5 corridor and the Pacific Northwest.

One of the first big productions under Sparks was the first performance in the Northwest of Benjamin Britten’s enormous War Requiem, with performances on campus and at St. Mark’s Cathedral in Seattle. As the Seattle P.I. said:

“The performance was an inspired event… and by any standard, was outstanding. It is even more impressive considering the difficulty of the music, the size of the performing forces and the youthfulness of the musicians.” 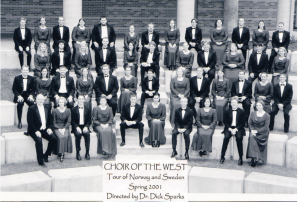 Sparks, an accomplished conductor of orchestras, also involved the Choir of the West in a series of performances with Seattle’s Northwest Chamber Orchestra, including Bach’s Mass in B Minor and St. John Passion. Other projects included Stravinsky’s Les Noces, Rachmaninov ’s Vespers (the first complete performance by a university choir), and a performance of Brahms’ Liebeslieder Walzer with pianists Robin and Rochelle McCabe. Also with Robin McCabe came an acclaimed commission from Peter Schickele of his The Twelve Months. Sparks started a series of CD recordings at the time Lagerquist Concert Hall opened in 1995. He made 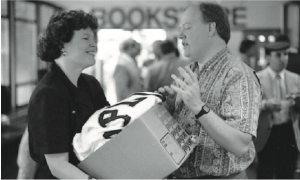 five recordings with the Choir of the West (including Rachmaninov ’s Vespers and current COW conductor Richard Nance’s Mass for a New Millennium). He also started a series of Christmas recordings (released every other year), involving all PLU choirs.

Sparks’ career at PLU ended in 2001 with a performance of the Verdi Requiem (with all Choir of the West alumni soloists) and the tour of Scandinavia. He left PLU to pursue conducting of 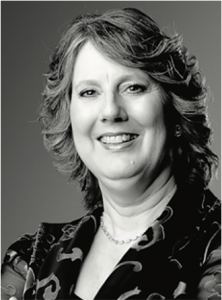 professional choirs and to do guest conducting. He joined the choral faculty at the University of North Texas in 2009.

Kathryn Lehmann became the fifth conductor of the Choir of the West in fall 2001. Lehmann was the first PLU graduate and former COW member to return to conduct the choir. Lehmann’s choirs were chosen to perform for the Washington Music Educators Association (2002), as well as the Northwestern Division Convention of the American Choral Directors Association (2006). The highlight of her career at PLU came with the choir’s performance at the ACDA National Convention held in Los Angeles in 2005. 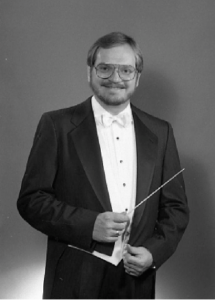 Richard Nance came to PLU in 1992, and for 15 years conducted the University Chorale, University Singers and Choral Union. All three of these choirs were chosen to sing at ACDA division conventions (1996, 1998, 2000, 2003, 2006), and Choral Union performed at the 2001 ACDA National Convention in San Antonio. Upon Kathryn Lehmann’s departure from PLU in 2006, Nance was named director of choral studies and conductor of the Choir of the West. 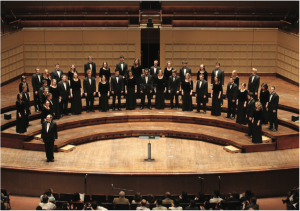 The choir toured to Romania, Bulgaria and Hungary in 2007, and to Germany and France in 2011. That tour featured performances at the Harmonie Festival in Lindenholzhausen, Germany, a world competition that takes place once every six years. Choirs from 47 countries participated in the 2011 festival. The Choir of the West won a Gold Certificate (second place) in the Large Mixed Choir division, and the men of the choir won a Gold Certificate (first place) in the Male Chamber Choir division. The women of the choir were awarded a Silver Certificate in the Women’s Chamber Choir division. In 2015, Choir of the West toured Sweden, Denmark, Germany, the Czech Republic and Austria. The Choir participated in the Anton Bruckner Choral Competition, where they won the Large Mixed Choir and Sacred Music categories, as well as the Anton Bruckner Award as the outstanding choral ensemble at the competition.

Domestically, the choir has toured regularly down the I-5 corridor and to Montana. In January Term 2009, the choir visited the upper Midwest, singing at all PLU’s Lutheran sister colleges in Minnesota, North Dakota and Iowa. The J-Term tour in 2017 took the Choir to Phoenix, Las Vegas and Southern California; and the J-Term tour in 2019 took the group to New Mexico and Colorado. 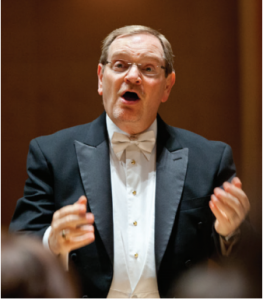 During Richard Nance’s tenure, the Choir of the West has participated in prominent world and North American premieres, including Northern Lights, by Latvian composer Eriks Ešenvalds; Exsultate, by PLU choral faculty member Brian Galante; and Pied Beauty by Los Angeles composer J.A.C. Redford. In collaboration with the University Symphony Orchestra and Choral Union, the Choir of the West gave the North American premiere of Matthäuspassion by Swedish composer Sven-David Sandström (guest conducted by Stefan Parkman and attended by Sandström), and in March 2017 these same groups combined to premiere the Nordic Light Symphony by Ešenvalds, who was in attendance. The choir has joined the University Chorale and USO to premiere Redford’s A Christmas Invitation, Unto Us by PLU jazz professor David Deacon-Joyner, and Drum Taps by PLU faculty composer Gregory Youtz.

The series of recordings started by Richard Sparks has continued under Richard Nance. The Choir of the West has released Phoenix, The Lightener of the Stars, and Look Down, Fair Moon, and Christmas discs Wondrous 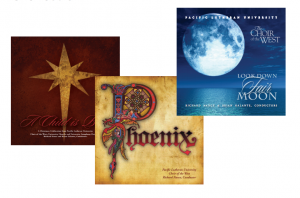 Child, Peace, and A Child Is Born feature all the PLU choirs and the University Symphony Orchestra.

In 2009, PLU moved the Seattle performance of the annual Christmas celebration to Benaroya Hall. Oregon Public Broadcasting recorded the 2015 concert, which featured alumna and Metropolitan Opera Star Angela Meade.
It aired in Washington and Oregon. This year, it will be seen on more than 300 PBS stations nationwide.

This year we will be celebrating the 500th anniversary of the Lutheran Reformation during the annual Christmas Concerts. Choir of the West, University Chorale and University Symphony Orchestra will perform J.S. Bach’s advent cantata “Wachet Auf” (Wake, awake!).

The program will also include one of Robert Russell Bennett’s beloved carol medleys, “The Many Moods of Christmas,” and traditional Christmas favorites and festive carols sung by the audience.
Join us, In Sweet Rejoicing!

Under the leadership of Richard Nance and Brian Galante, the PLU choral program continues to thrive. The great 90-year legacy of the Choir of the West, founded in the work of hundreds of singers who have performed in PLU choirs over the years along with their conductors, is truly special and worthy of great celebration!