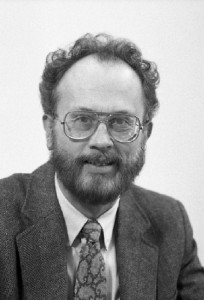 It is with deep sadness that we share the passing of Professor Emeritus Larry Edison, Ph.D., who died Jan. 24, 2018 at the age of 81. Larry was hired as an associate professor in the Department of Computer Science and Mathematics at PLU in 1982. He was promoted to professor in 1986, a role he served for more than a decade before beginning phased retirement in fall 1998. He completed phased retirement in 2003.

Larry treated his colleagues with respect and exhibited genuine interest in their lives. “I think the most common word used in describing our friend is ‘kind,’” said Sheri Tonn, professor of chemistry, in a post on social media following Larry’s death.

He also was an advocate for educating the whole student and praised the small classroom setting, which helped him get to know his students on a more personal level.

“It has been important to me to know my students personally,” Larry said in a 1998 article in what was then PLU’s Scene magazine. “I hope I have contributed to my students’ total personal development, not just their academic growth.”

Edison received his bachelor’s degree from Whitman College in 1958, before earning his Ph.D. in mathematics from Stanford University in 1965. He began teaching at Reed College in Oregon, before moving to Alma College in Michigan.

After completing his master’s degree in operations research — with a concentration in computer science — at Stanford, Larry immediately put his new degree to use at PLU. He was instantly regarded as an excellent teacher and colleague.

In addition to his teaching responsibilities, Larry also served in a number of leadership roles during his 16 years of service to the university. He was department chair from 1984 to 1987 and from 1992 to 1995. He also was a member on various committees across campus.

Larry was a proponent of cross-disciplinary education, teaching calligraphy during January Term. He participated in many summer workshops as part of the Integrated Studies Program, and helped craft a new sequence on technology.

Larry’s off-campus community involvement included serving as founder and president of the University Place Aquatic Club, membership in the Society for Italic Handwriting (teaching workshops and community education courses on the craft), as well as serving on committees through Curtis High School and University Place United Presbyterian Church.