Why Norwegian Women Can Have It All 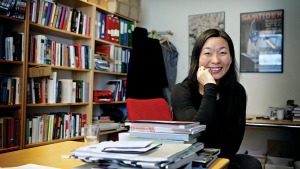 The Scandinavian Area Studies program is pleased to invite Norwegian journalist and editor Cathrine Sandnes as our 2014-15 Harstad Memorial lecturer. Sandnes is an influential voice in current social debate on gender equality, contemporary literature and sport in Norway. In her lecture, Sandnes will explore the particular challenges and successes of “having it all” – parenthood, family and career – in contemporary Norwegian society.

Cathrine Sandnes’ decades of engagement in feminist issues began in 1990 with her work as a newspaper journalist. She held the position of cultural editor for the newspaper Dagsavisen from 1998-2000 and 2002-2005. From 2006-2014 Sandnes served as the editor of Samtiden, Norway’s largest and oldest cultural and political journal. Under her leadership, the journal received several awards for its intense and critical engagement with contemporary issues. In 2013, Sandnes was named to the Norwegian government’s commission for the marking of the 100-year anniversary of women’s right to vote, and was responsible for the publication of Norsk likestillingshistorie 1814-2013, a history of women’s equality from 1814 to 2013. She is presently the director of the Norwegian think tank Manifest.

The Bjug Harstad Memorial Lecture is an endowed lecture made possible through the generous support of Harstad family and friends.

Light refreshments will be served following the lecture.