“ Bjug Harstad – A Man For All Seasons“

Bjug Harstad was a remarkable man- sturdy, plain-spoken, determined, and administratively able. Without his leadership, the Lutheran church among Norwegian Americans in the Pacific Northwest would have been much slower to develop and Pacific Lutheran University might not exist. He was a man of many parts, a man for all seasons.

Philip Akerson Nordquist is the grandson of Swedish immigrants who homesteaded in South Dakota in the 1890s, and the son of parents who headed west ahead of drought and depression. A native Washingtonian, he was born in Ellensburg, educated in the public schools of Lake Stevens, and graduated from Pacific Lutheran College in 1956. While at PLU he played football and basketball for Marv Harshman, wrote for the Mooring Mast, and was active in student government. He received his M.A. and Ph.D. degrees from the University of Washington and taught at PLU from 1963 until his retirement in 2005. 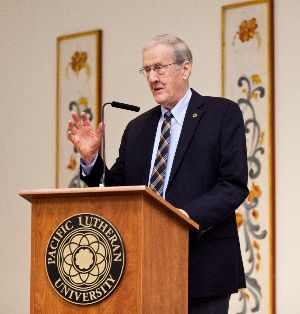 He also served as department chair, faculty representative to the Board of Regents, faculty athletic representative, faculty chair and acting provost. He also won a number of student-organized teaching and service awards. In 1983 the PLU Alumni Association gave him its Heritage Award, and in 1993 its Distinguished Alumnus Award.

He has written and lectured extensively about Luther, Lutheranism, and Lutheran higher edition and in 1990 his centennial history of PLU, Educating for Service: Pacific Lutheran University 1890-1990, was published.

During the remodel of Xavier Hall in 2000-2001 a lecture hall was named in his honor, the Philip A Nordquist Lecture Hall, an electronic classroom and meeting facility that held the library reading room from 1937-1967. Philip Nordquist is married to the former Helen Jordanger ’57 and they have two sons, Christopher, a 1987 graduate of St. Olaf College and Paul, a 1992 graduate of PLU.