The NatSci Fellows program is an inclusive opportunity open to all Natural Sciences majors (Physics, Computer Science, Mathematics, Geosciences, Engineering, Chemistry, and Biology). The program encourages students to participate in 1) coursework support, 2) professional development, and 3) social and wellness related activities that will enhance their PLU experience and lead to increased sense of belonging and student success.

“I believe it helped me find my place in the PLU community…
I feel that I belong at PLU.”

Our mascot is Enrieké the slug who lives in Rieke. (See below for the history of the Rieke slug.) Enrieké is a curious little gastropod who normally resides in the Rieke admin office. But from time to time, he wanders away to explore Rieke and Morken on his single, slimy foot. The NatSci Fellows who find Enrieké can return him to the office for a prize.

Why should you become a NatSci Fellow?

Benefits of the NatSci Fellows:

“My motivation to sign up was to become a NatSci fellow and feel a sense of community with other natural science majors.”

What past NatSci Fellows say about the program:

The NatSci Fellows program made me feel more comfortable…

“[The program] kept me engaged with the PLU community through the entire year.”

How to become a NatSci Fellow

To obtain NatSci Fellows status for the academic year, attend the qualifying number of sessions over the course of the academic year. Whenever you complete an activity in a category, record it in your Passport (see example in Passport) with a sticker, name of activity, and date.

There are 2 ways to sign up for NatSci Fellows: 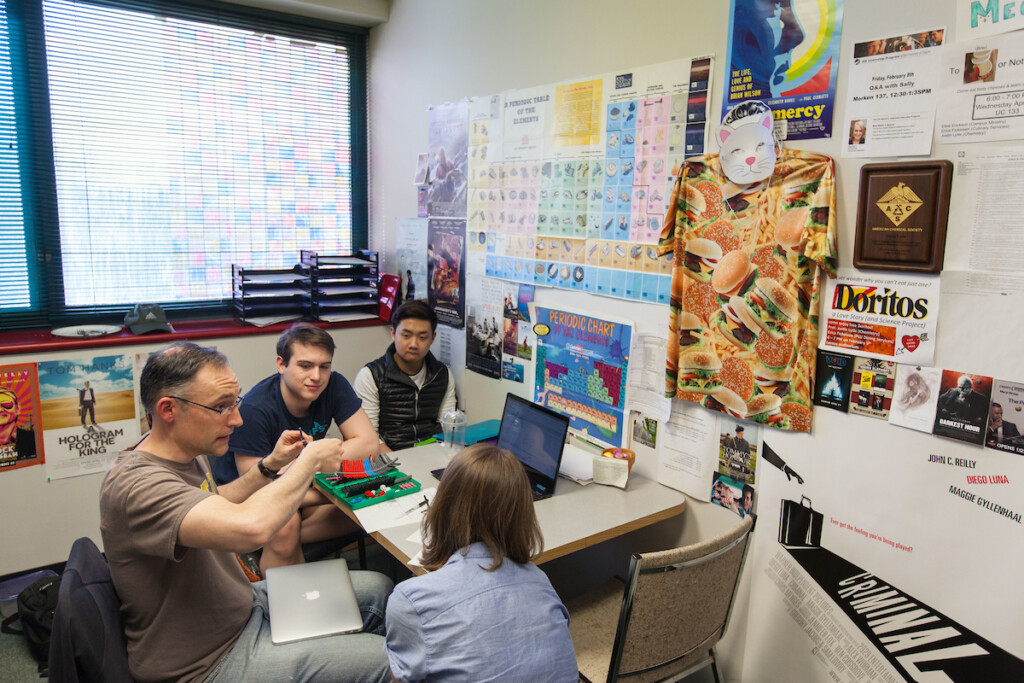 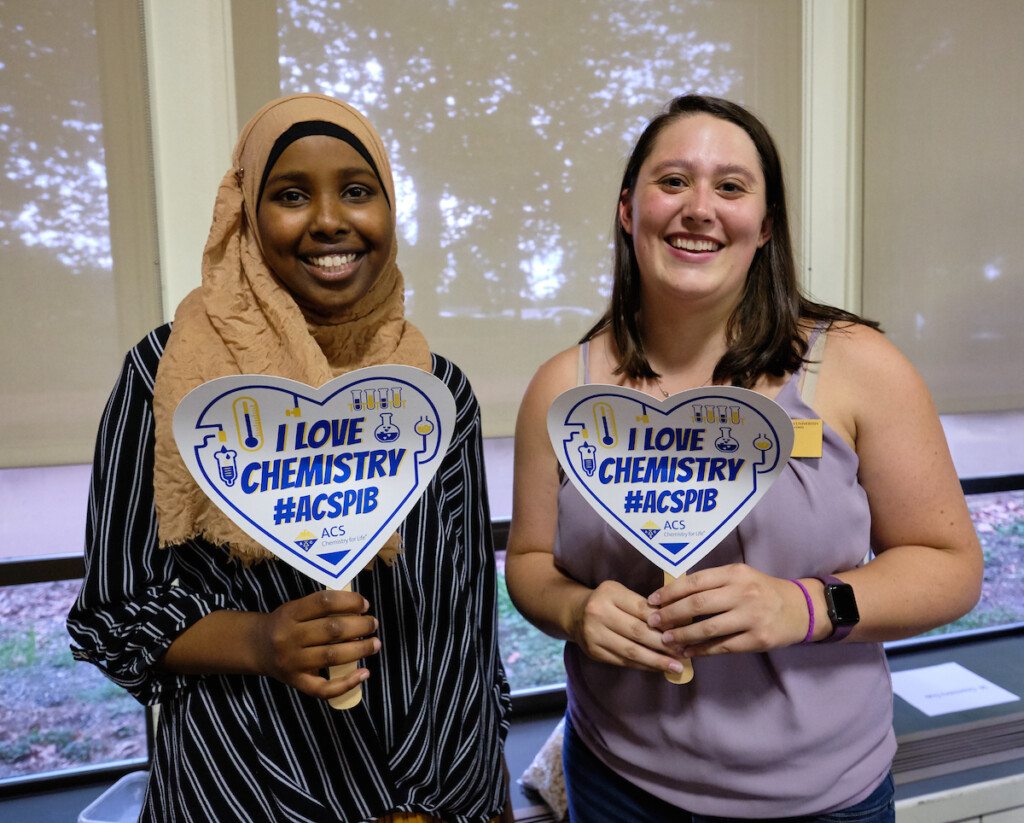 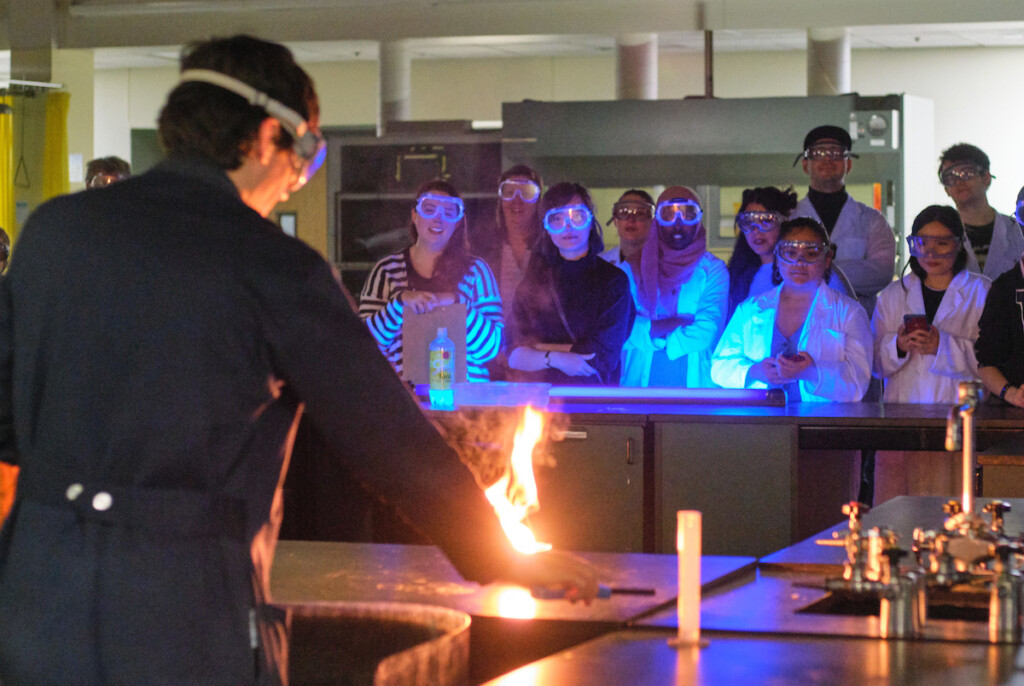 What's the deal with Enrieke?

If you’ve ever walked through the Rieke Science Center, it’s pretty likely you’ve seen our slug diorama. The Rieke slug was created by PLU Biology Professor Jens Knudsen. Dr. Knudsen was not only an excellent teacher and biologist, but also a talented artist in sculpting, wood carving, and painting. The slug and accompanying tidal scene were part of a much larger installment that Dr. Knudsen made for the Point Defiance Zoo and Aquarium. Sadly, the other dioramas have been lost, but the slug and tide pool have been part of the Rieke Science Center’s legacy since the 1980s. In Fall 2018, we held a contest to name the Rieke slug, and Brianna Celix (Biology ’19) came up with the winning name: Enrieké!

Here’s what Brianna had to say about the name Enrieké:

First, I wanted something to stand out from all of the other names of campus monuments and buildings named after, mostly, caucasian men and women. Second, I wanted to submit something that was representative of myself and the many, MANY hours I have spent in Rieke. I chose the name Enrieké not only because it is a clever integration of names and the name of the Rieke Science Center, but because of my identity as a mixed-race, Mexican woman in STEM. While the name is given to the beloved Rieke slug, really my hope, with a nod to my own identity, is that the name may be a divergence from the monochromatic naming of campus monuments, and instead be representative of the diversity we hope to exhibit at PLU, and an encouragement for future, more profound representation of marginalized and minoritized identities within PLU, STEM, and society.

In addition to winning a gift card, Brianna received a crocheted version of Enrieké from Biology Professor Neva Laurie-Berry. The crocheted Enrieké was so popular that Dr. Laurie-Berry made another to sit in the window of the Rieke admin office.

Since then, NatSci Fellows has adopted Enrieké as our program mascot. While the huge slug carving is contained behind glass, the mini crocheted Enrieké often escapes into the wider world of Rieke and Morken causing the NatSci Fellows to embark on a slug hunt. Finding and returning Enrieké  is a point of pride and earns the finder(s) a limited edition Enrieké  sticker and a photo op with Enrieké . 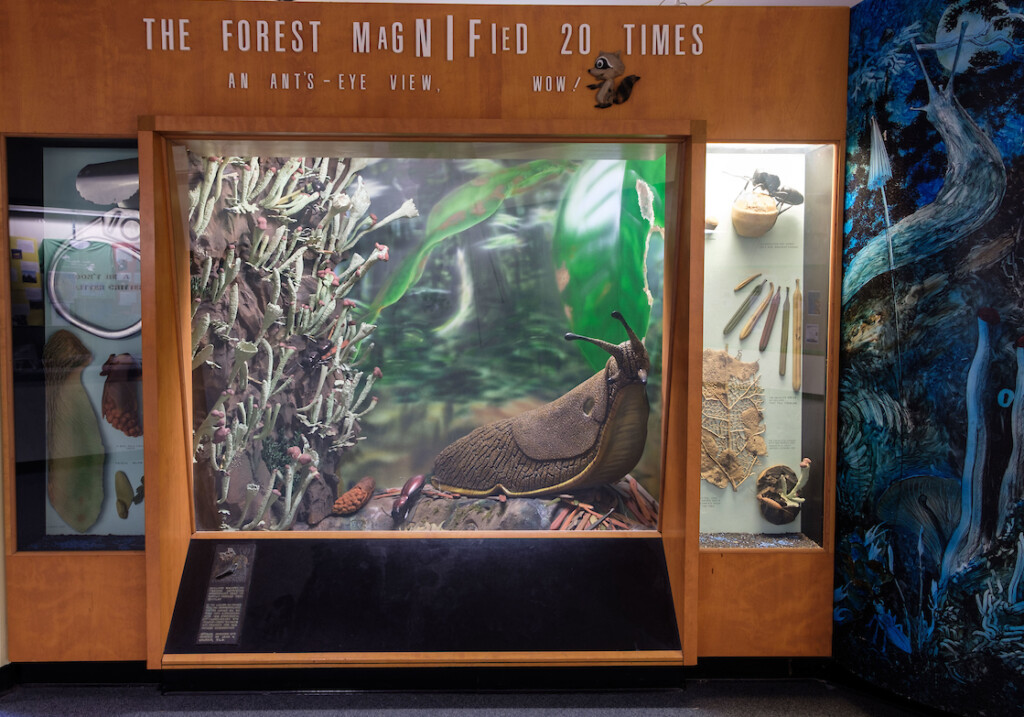 Enrieké inside his display case habitat. 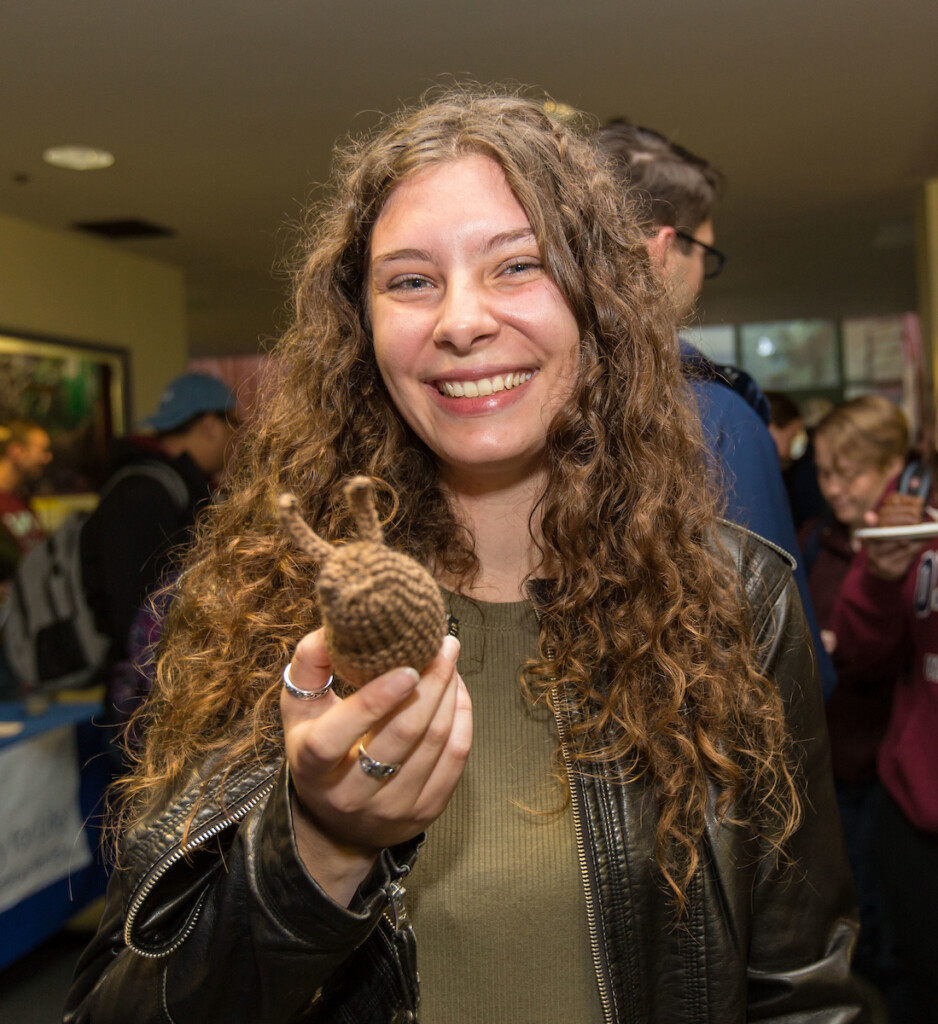 Biology Major Brianna Celix '19 with the crocheted version of Enrieké. 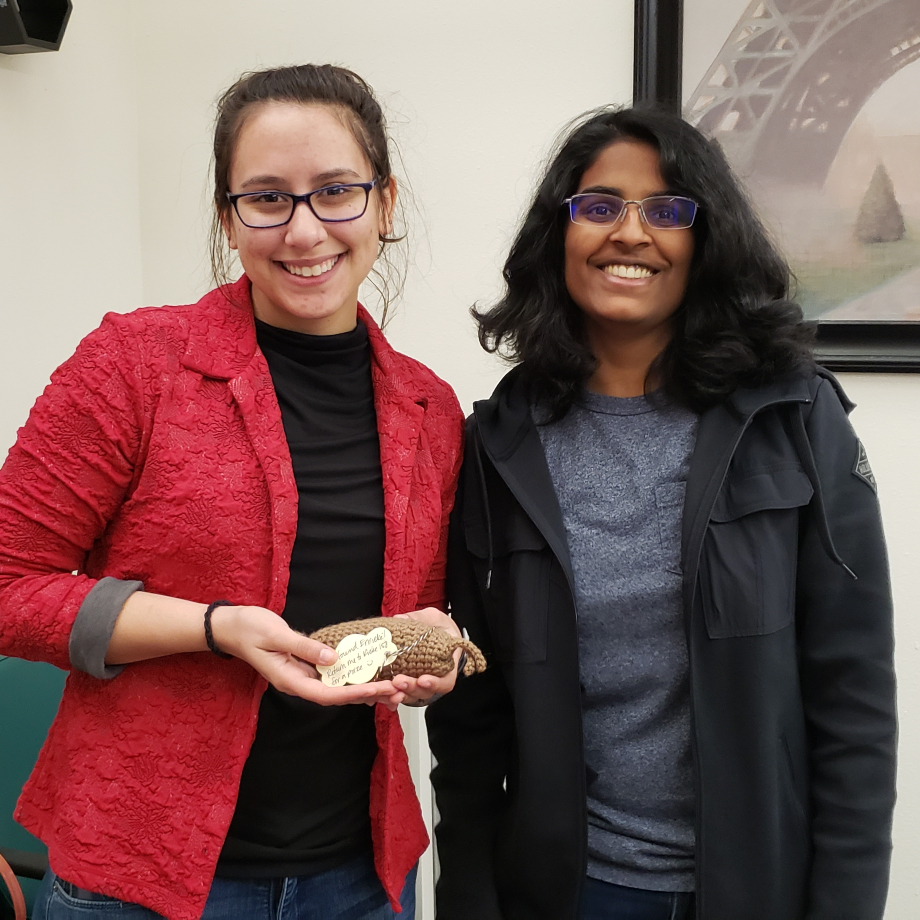 This twice-a-week walk gives us a chance to meet up in person for a casual stroll around our campus. A Natural Sciences faculty member will lead the group on an easy 20 minute walk beginning at the Rieke Science Center on lower campus. Most walks will feature a different guest to share their expertise with the group. We’ll stick to the same route, so you’re welcome to join or leave the walk at any point along the way. Students, staff and faculty from any area of PLU are welcome to join – the more the merrier! 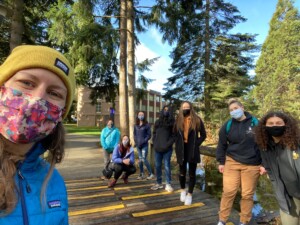 Walk agenda:
5 min – assemble between Morken and Rieke
20 min – walk our loop around campus
5 min – say farewell and head back to our next class/meeting/etc.

Please note that we expect everyone to wear masks.

For our NatSci Fellows, this event is eligible for a sticker in the social and wellness section of your booklet. 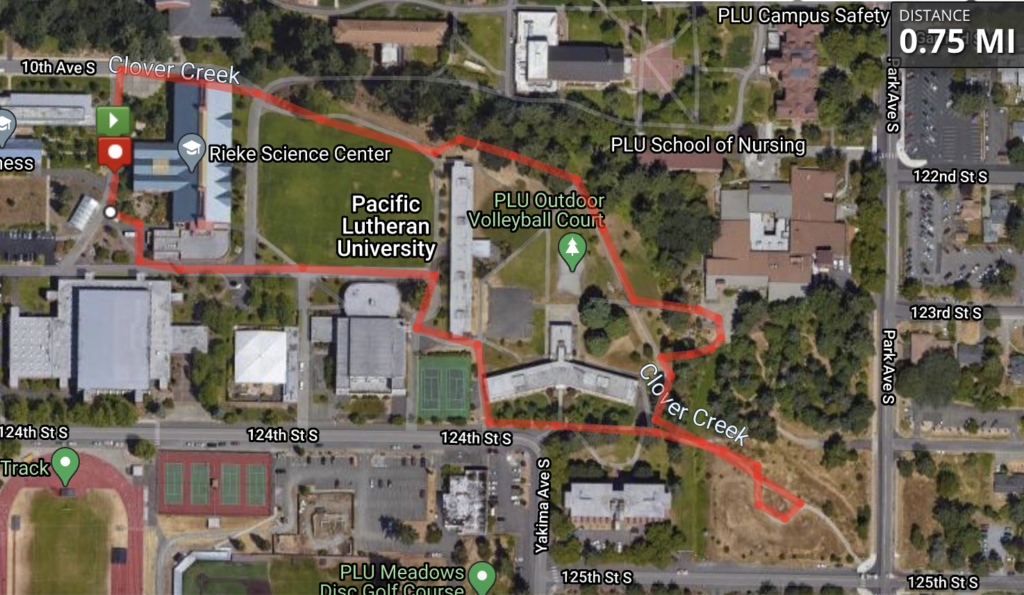 Do you have a suggestion for the program?

What if I lose my Passport?  What should I do?
You can visit Christine or Elizabeth in Rieke 158 or Morken 152 to pick up a new book. If you’re participating remotely, email Dr. Siegesmund (siegesam@plu.edu) to have a new book sent to you.

If I meet the required number of stickers for a category, do I need to get any more, or am I done?
If you get 15 stickers for coursework support, 7 for professional development, and 5 for social and wellness, then you have met the criteria to become a NatSci fellow. Congratulations! However, there will be prizes for the most stickers. If you need an additional passport with more sticker space, please see Elizabeth or Christine in Rieke 158 or Morken 152 or email Dr. Siegesmund (siegesam@plu.edu).

How do I submit my passport? And when is it due?
More information will be distributed once we know the status of Spring ’21 (in-person or distance).

What if there is an event I think could count under one of these categories, but is not listed in the qualifying activities?
Chances are the event you’re thinking of could earn you a sticker! Contact Dr. Seidel (seidelsb@plu.edu) or Dr. Siegesmund (siegesam@plu.edu) describing the event and what category it would fit.