Image: Scott Foss ’91 on the rooftop of the Stewart Lee Udall Department of the Interior Building. (Photo: John Froschauer/PLU)

Washington, D.C. (March 20, 2017)- When Scott Foss ’91 enrolled at Pacific Lutheran University, he dreamed of becoming a paleontologist and pursuing a career outdoors conducting research. Now, he’s a senior paleontologist at the Department of the Interior. Foss serves as a policy adviser and resource director in Washington, D.C., 30 years after his dream began.

“Working on the bureaucratic side we call ourselves ‘paleocrats’ because we’re actually interpreting the science for government,” Foss said. “Field research was what I always wanted to do, but a big part of what I do now is coordinate everything that goes on in the field.”

Foss earned his research and resource management chops on the American West, serving as a National Park Service paleontologist and museum curator at the John Day Fossil Beds National Monument in Oregon, and later as a regional paleontologist with the Bureau of Land Management headquartered in Utah. Along the way, he earned a Ph.D. in biological sciences from Northern Illinois University.

In 2012, Foss relocated to Washington, D.C., to assume his current role, one he likens to an orchestra conductor. “I don’t get to play an instrument anymore, but I’m right there for everything that happens,” Foss said. “I know about every fossil that’s being discovered before it hits the news. I know who is working where and on what. That’s the excitement of it, being on the edge of everything going on in paleontology.”

Foss juggles a variety of hats in an average week at the office, ranging from policy expert to to public relations officer.

“I spend a lot of time helping to develop policy as well as reviewing other proposed policy, thinking about how it could affect paleontological resources,” Foss said. “We work on and review a lot of environmental impact statements and assessments, making sure they are adequate for paleontology.

“We’re also really big in the planning and management process of public lands. If there is going to be a pipeline, right-of-way or an energy corridor that may affect a lot of paleontological resources, I get involved and explain how it will affect those resources or not affect them.”

A natural maven, Foss’ role in D.C. has also required him to play the role of connector. “If we need to know something about paleontology here in Washington I know the person in the field who has that information,” Foss said.

He’s also developed a rapport with a wide range of media members. “After a new discovery, I’ll get a lot of calls from news services and connect them with the right expert to talk to,” he said. 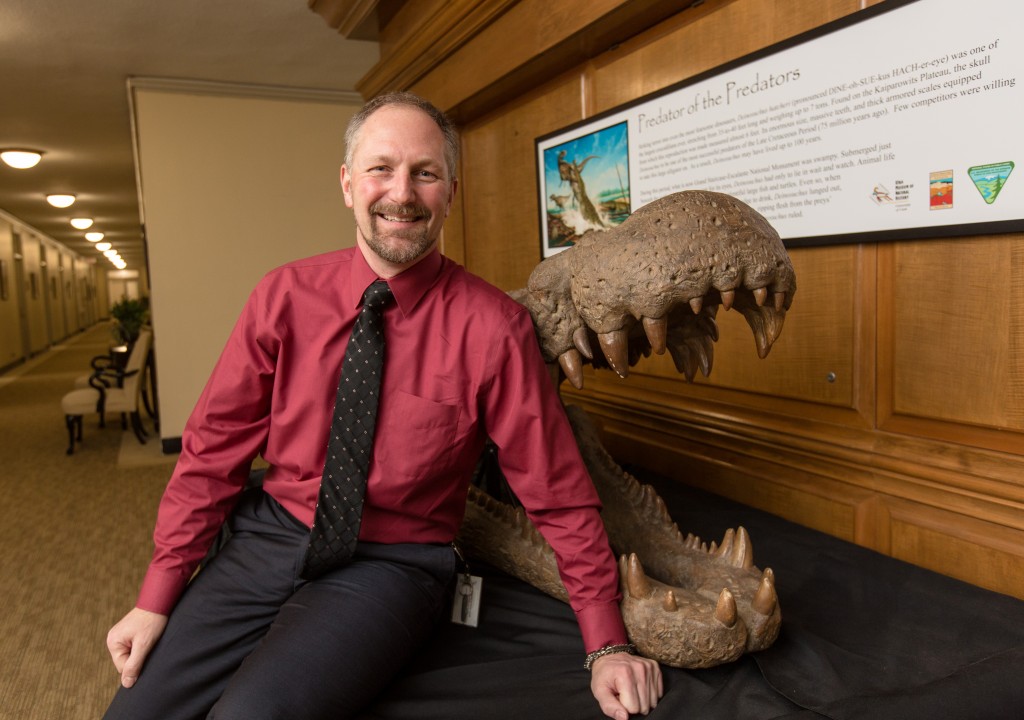 PLU is just a great school, my experience there was really good. I have a lot of friends from my PLU days and those are the active friendships in my life that go back the furthest. I went through the geology program at PLU and have stayed in contact with the faculty throughout my career.

I knew I wanted to become a paleontologist by the time I arrived on campus. I’ve always been interested in a lot of different things, and I was able to pursue them at PLU, knowing that I would eventually have to set them aside to focus on paleontology. I took a lot of classes to do with art, writing and literature coursework. I also played tuba in the wind ensemble and the crazy pep band PLU had back then, known as “commando band.”

I’m really glad in retrospect I did it that way. That would be advice I’d give any current student — look forward and prepare for your desired career, but don’t feel like you have to immerse yourself in it as an undergrad, because you have your entire life to do that.

Foss regularly fields inquiries from unlikely sources, as well. “I get a ton of calls from producers in Hollywood,” he said. “They’ll call me up and say (for example) ‘I need to know all about tyrannosaurus rex.’ I’ll ask them if they need to know North American or Asian T-Rex, and from there we’ll narrow it down and figure out who in the field they should talk to.”

Foss is passionate about his work in D.C. and enjoys living with his family in nearby Virginia. Yet, as it did throughout his PLU schooldays, his heart often pangs for the outdoors and the great expanse of the Pacific Northwest and Mountain West regions.

“It’s very exciting here basically all of the time, but I miss the field tremendously,” said Foss, who still owns and frequents a small vacation home in rural Oregon. “My life is in the West, and I’ll be back there again someday.”