The 2020 Rachel Carson Science, Technology and Society lecture brings Willliam Foege, B.A. (’57), M.D., M.P.H. back to Pacific Lutheran University. Dr. Foege is best known for his leading role in the effort to eradicate smallpox, but he was also key to the fight to eliminate Guinea worm disease, polio, measles and river blindness. He’s a global health champion, especially in the arenas of child health and development, preventative medicine, and vaccines, and he lent his passion and expertise to help shape and expand The Bill and Melinda Gates Foundation’s revolutionary mission in global health.

In the 1970s, Dr. Foege served as the Director for the Centers of Disease Control and Prevention, and in 1986, Foege became executive director of The Carter Center where he continues to serve the organization as a senior fellow. Former President Jimmy Carter called Foege one of the two men in his life, other than his father, “who have shaped who I am.”

For his lifelong commitment to improving the lives of people of all nations, Dr. William Foege was awarded the Presidential Medal of Freedom by President Barack Obama in 2012. 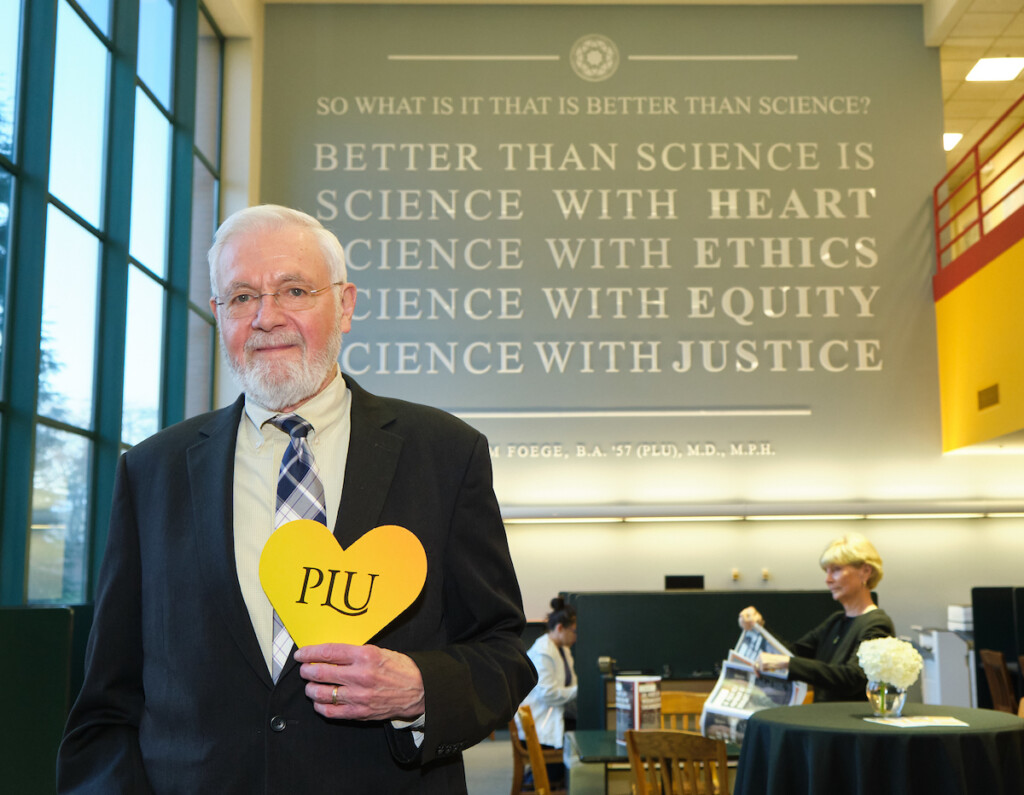 William Foege '57 poses in front of a wall in the Rieke Science Center which features his quote.

Dr. Foege speaks about his time at PLU.

James McLurkin is a Sr. Hardware Engineer at Google. He is one of the leads on the AIY Project, which builds Artificial Intelligence (AI) hardware for Do-It-Yourself (DIY) maker projects. His top-secret plan for global change is to build things that help build more engineers. He is a recovering academic; as an Assistant Professor at Rice University his research was on distributed algorithms for multi-robot systems, which is software that produces complex group behaviors from the interactions of many simple robots. Previously, McLurkin was a Lead Research Scientist at iRobot and was the 2003 recipient of the Lemelson-MIT student prize for invention. He holds an S.B. in Electrical Engineering with a Minor in Mechanical Engineering from MIT, an M.S. in Electrical Engineering from University of California, Berkeley, and an S.M. and Ph.D. in Computer Science from MIT.

Dr. McLurkin presented his talk: “The Future of Robotics is Swarms: Why a Thousand Robots are Better than One” on March 5, 2019.

Multi-robot systems are the future of a futuristic field. Large populations of robots can solve many practical applications faster, cheaper, and in fundamentally different ways than individual robots. The key to realize this potential are distributed algorithms, and a whole lot of really cheap little robots. These ideas aren’t new; ants and bees have been using this approach for 120 million years, and we can learn much from them. This presentation makes the case for large populations of robots, and goes “under the hood” of algorithms that make them work. Key ideas are illustrated with a live 12-robot demo.

Some of Dr. McLurkin's Projects 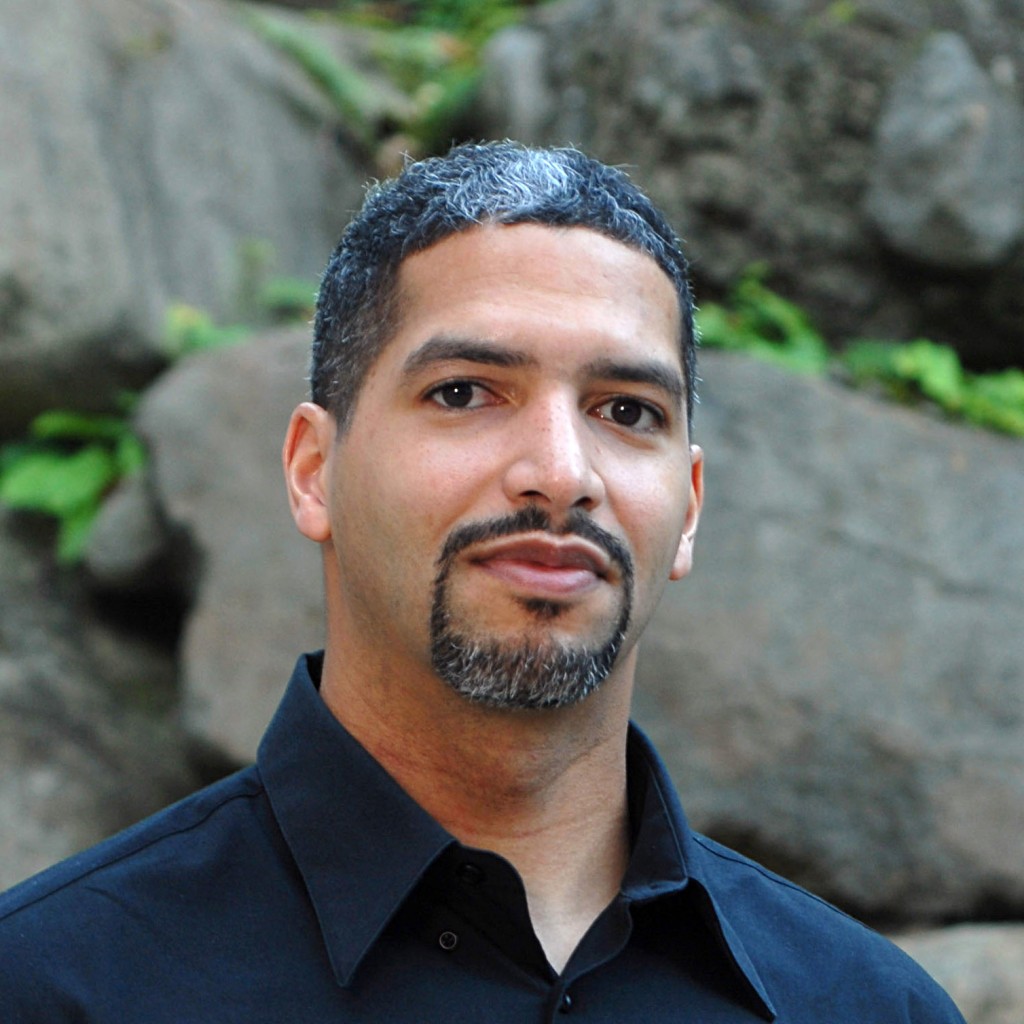 Limor “LadyAda” Fried, of Adafruit, chats with James McLurkin about what AI really is, what engineers do, making things, and how AIY Vision and Voice kits help people learn about AI and solve problems in their own lives.

Dr. Pamela Ronald is a Distinguished faculty member in the Department of Plant Pathology and the Genome Center at the University of California, Davis and also serves as founding director of the UC Davis Institute for Food and Agricultural Literacy.

Dr. Ronald studies rice genes that control resistance to disease and tolerance to environmental stress. Ronald and colleagues received the 2008 USDA National Research Initiative Discovery Award for their research on rice submergence tolerance. In 2011, Ronald was selected as one of the 100 most creative people in business by Fast Company Magazine. In 2012 Ronald and colleagues received the Tech Award for innovative use of technology to benefit humanity. In 2014 she was named one of the world’s most influential scientific minds by Thomson Reuters, in 2015 was selected by Scientific American as one of the world’s 100 most influential people in biotechnology and in 2016 was named one of the 50 innovators and visionaries who will lead us toward a more sustainable future by Grist magazine.

Ronald is co-author of Tomorrow’s Table: Organic Farming, Genetics, and the Future of Food. Bill Gates calls the book “a fantastic piece of work” and “important for anyone that wants to learn about the science of seeds and challenges faced by farmers.” In 2012, Tomorrow’s Table was selected by The New Earth Archive as one of the 25 most powerful and influential books with the power to inspire college readers to change the world. Ronald’s 2015 TED talk has been viewed by more than 1.5 million people and translated into 24 languages. 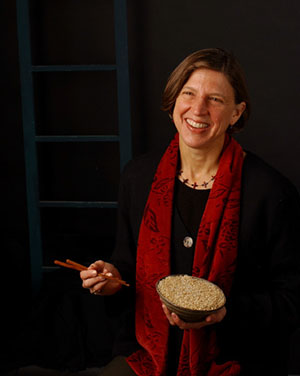 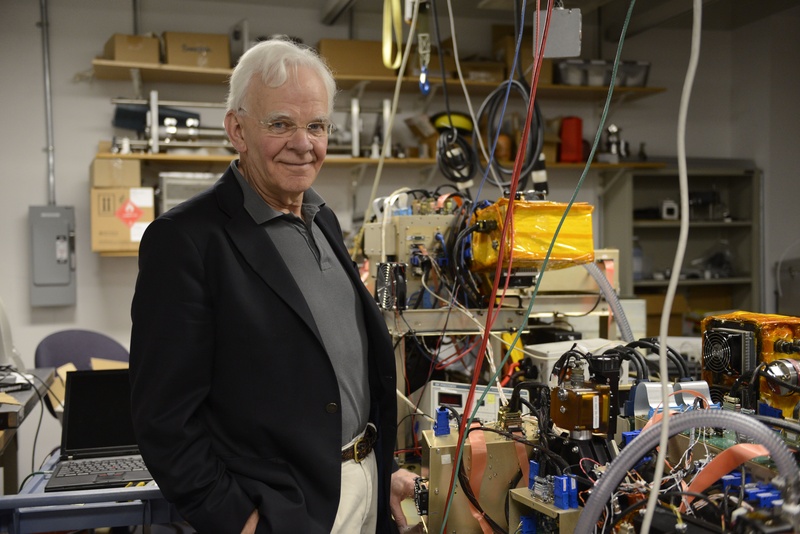 Chemistry professor James Anderson leads a research team of 20 that focuses on the interaction between climate and energy. Photo by: Alana M. Steinberg, courtesy of The Harvard Crimson

James G. Anderson was born in Spokane, Washington. He earned his B.S. in Physics from the University of Washington and his Ph.D. in Physics and Astrogeophysics from the University of Colorado. He joined the faculty of Harvard University in 1978 as the Robert P. Burden Professor of Atmospheric Chemistry; in 1982 he was appointed the Philip S. Weld Professor of Atmospheric Chemistry. Anderson served as Chairman of the Department of Chemistry and Chemical Biology from July 1998 through June 2001.

In addition, Dr. Anderson has received the United Nations Vienna Convention Award for Protection of the Ozone Layer in 2005; The United Nations Earth Day International Award; Harvard University’s  Ledlie Prize for Most Valuable Contribution to Science by a Member of the Faculty; and the American Chemical Society’s National Award for Creative Advances in Environmental Science and Technology.

Videos courtesy of The Harvard Crimson.