It’s a big year for retirements in the Division of Natural Sciences! We’re sorry to see our amazing friends and colleagues leave, but we’re excited for the new adventures they’ll embark upon in retirement. We expect them to keep in touch and send us lots of updates – hopefully with photos that will make us appropriately envious. Best wishes to Jill, Sheri, Tom, George, and Richard!

Dr. Sheri Tonn is retiring as a professor of chemistry at Pacific Lutheran University where she has been on the faculty since 1979. She has taught environmental chemistry, instrumental methods, and biochemistry. For many years she was involved in the cross-disciplinary integrated studies and environmental studies programs. She led student international trips to Australia and Guatemala. Sheri has served in various administrative roles, including 15 years as the vice president of finance and operations. Her responsibilities included the university’s budget, endowment investments, risk management and real estate, facilities, campus master planning, dining services and other auxiliary services. She also has served as Dean of Natural Sciences and Dean of Information Resources, which included the Library, Campus Computing and other campus technology.
Sheri has served on a number of boards, and was the founding board chair of AASHE (Association for the Advancement of Sustainability in Higher Education) and Citizens for a Healthy Bay. She is the immediate past chair of the Tacoma Pierce Community Foundation and the current chair of the Washington State Board of Pilotage Commissioners.

Sheri earned her B.S. in chemistry at Oregon State University, and her Ph.D. in chemistry from Northwestern University. An avid SCUBA diver, she is looking forward to more dive trips in her retirement!

Of Cats and Math 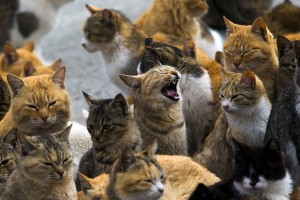 Math professor Ksenija Simic-Muller and son Joseph Muller, a sixth grade student at Bryant Montessori, coauthored an article for Mathematics Teaching in the Middle School. Their piece, “Isle of Cats,” uses mathematics to explore the issues impacting Aoshima Island in Japan, population: 13 humans and 130 cats. What an awesome collaboration! 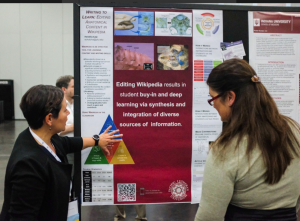 Heidi Schutz presented at the annual Human Anatomy and Physiology Society Conference (HAPS) in Portland this May. Heidi has partnered with Wiki Education for her class’ writing assignments since 2017 and spoke about the free tools and instructor support that’s enabled her students to edit anatomical content in Wikipedia. These writing projects have improved “student buy-in and deep learning.” Michelle Behrens also attended the conference, which was focused on teaching, so Michelle and Heidi attended tons of talks, posters and workshops to hone their teaching practice.

We're celebrating all the amazing Lutes we're sending out into the world - whether they're gone only for the summer or embarking on their journey - we're so proud of everyone's hard work and and dedication!

It’s been a busy year for Math Professor Tom Edgar. Aside from being the Math Department’s reigning publication champion (with three recent publications and six more currently in press), Tom was named Distinguished Teacher of 2019 by the Pacific Northwest MAA. In writing the press release for this award, his colleague, Math Professor Jessica Sklar, noted that Tom “has had a profound impact on students and instructors both within and beyond his institution.” He is a quintuple threat: a passionate and engaged educator, an innovator in the math department, a superstar collaborator, an inspiring and supportive advisor, and a dedicated researcher, both on and off campus. Also, he gives really excellent restaurant recommendations (that wasn’t part of the criteria for the award, but it should be).

Going from local math news to national math news: Tom was recently elected the Editor of Math Horizons magazine for their 2020-2024 term. Math Horizons is the undergraduate magazine associated with the Mathematical Association of America (MAA). Published quarterly during the academic year, Horizons addresses a student audience at the beginning of their formal mathematics study. Topics are wide-ranging and complex, and pretty much dictated by the author’s imagination and expertise. But before you send that email to Tom submitting your magnum opus on Pugh’s closing lemma, you should know that all articles must be written in an engaging, easily-understandable, and approachable manner. The ability to condense vastly complicated material into something easily digestible by a novice is no small feat, and Tom has been doing this for years. He’s going to be an excellent editor.

So let’s raise a glass to Tom for all his hard work, but first, let’s ask him to recommend the best local pub.

Teagan Haden and Tess Olsson will conduct summer research with Jacob Egge on “The Better to Taste You With: a Survey of Extraoral Taste Buds in Fishes.”

Emily Bond and Tran Hoang will conduct summer research with Tina Saxowsky on “Elucidating the Role of Transcriptional Mutagenesis in the Acquisition of Drug Resistance by the Yeast Saccharomyces Cerevisiae.”

Jennica Kelm and Emily Ness will conduct summer research with Justin Lytle on “Studying the Rate of Electrochemical Reactions on Gold-modified Carbon Electrodes.”

Sam Couch and Orion Schomber will conduct summer research with Alex Lechler on the “Last Glacial Maximum Paleoclimate of the Pacific Northwest.”

Adam also presented a keynote address: “Benzofulvenes: A Love of Conjugation, Synthesis, and Organic Chemistry” at the ACS Tribute to Professor Jim Currie at Reed College in Portland, OR in January 2019.

Daniel Heath had a paper accepted for publication in the September issue of Math Horizons – “Mathemagic of Paper Engineering.”  The paper relates a pop-up card design to geometric principles, with a template for readers to create the design themselves.

Ksenija Simic-Muller was a participant in the panel called “Equity and social justice theoretical frameworks to move us forward in developing a vision for mathematical modeling education” at the Critical Issues in Mathematics Education Conference that took place at the Mathematical Sciences Research Institute (MSRI) in March. MSRI is a big deal in the math world, and this was Ksenija’s first time there.

Ksenija also received a Karen Hille Phillips Regency Advancement Award with Eunissa Satterwhite to conduct research about mathematical and statistical modeling. Eunissa will be in the MAE program next year.

Elizabeth Alemán will be off for the summer, but she’ll be back in time for fall semester. Her son, Damian is a graduating senior at Emerald Ridge High School; her daughter Margaret, is beginning driver’s ed in late June, and Rocky, one of the dogs, is looking for summer work (along with Damian). 🙂 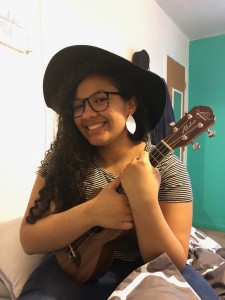 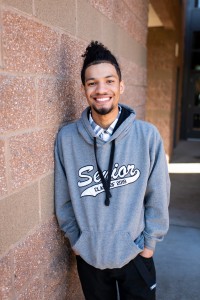 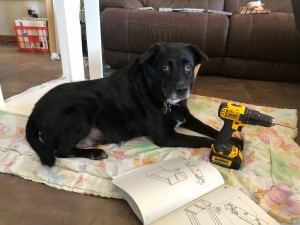 Rocky is handy around the house.

May 14-25: Textbook Drive to support the Lute Library & Course Reserves. Donate in Rieke!

May 21-23: Free Electronics Recycling Event – drop off items at the Concierge Desk