Ali (First-Year Student, Participant in Fall 2017 Linked FYEP Writing 101 Course) “Living in Lavender has given me opportunities to truly find myself through interactions with others. I love living in a place where I’m able to pursue my creative passions while creating & participating in a diverse community. I’ve found a true home here.”

Comfort and Belonging for All Residents

Residential Life is committed to creating inclusive living communities that foster a sense of belonging and comfort for all students, inclusive of all gender identities. Residential Life at PLU routinely works with students to address issues of individual need, comfort and fit with the on-campus living experience.

By participating in Gender Inclusive Housing, residents will:

First-year students who live in the Lavender Community in Ordal may opt into one of the FYEP Writing 101 sections linked with Diversity, Justice, and Sustainability Community (in Stuen Hall).

Below are a few examples of programs that have occurred in Gender Inclusive Housing in the past! If you have an idea for a wing or hall program, contact your Resident Assistant to see about planning it!

For more information about this Learning Community option contact: 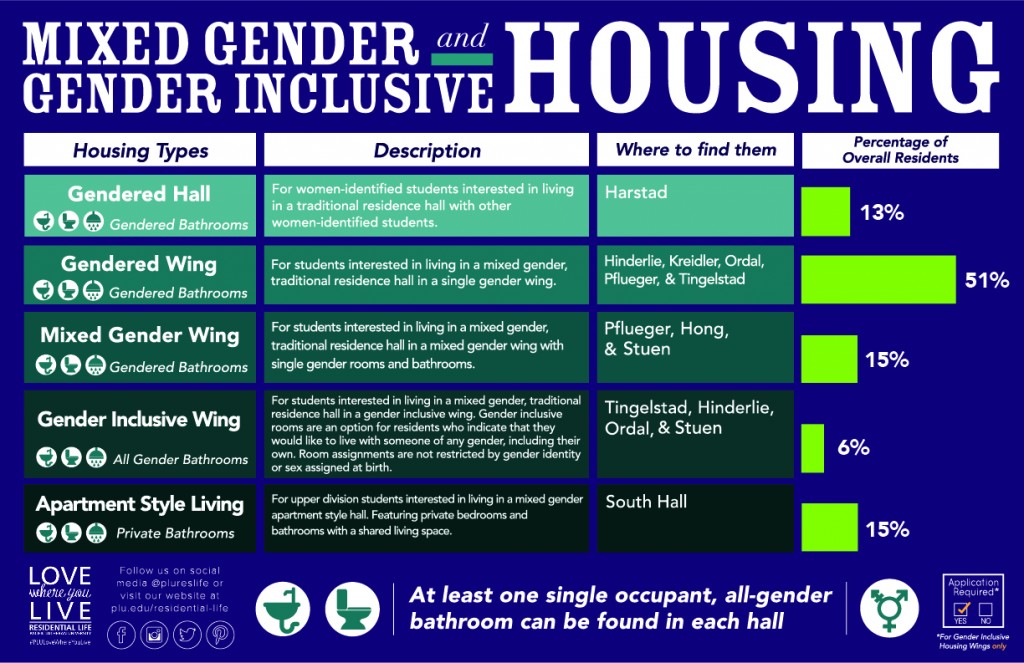 Since 2004, Hong International Hall has utilized mixed gender wings to implement language and culture communities representing the five spoken languages that are taught at PLU, and an International Honors (IHON) community.  In 2012, in response to and coordination with proposals from RHA and ASPLU, mixed gender apartments were permitted in South Hall.  This allowed students to request an apartment, containing private bedroom and bathroom, without regard to their sex assigned at birth or gender identity of their apartment-mate(s).
Due to the success of the gender inclusive option in South Hall, as well as continued student interest, PLU created two traditional residence hall wings with gender inclusive bathrooms. The Gender Inclusive Housing wings are a special Learning Community (LC) option for students who want a mixed gender living experience. Single rooms and gender-inclusive rooms are an option for students for whom their sex assigned at birth does not match gender identity. What makes these communities unique (as compared to other mixed-gender wings and/or South) is that they feature gender-inclusive bathrooms with enhanced privacy (open to all users, regardless of their sex assigned at birth or gender identity); private stalls with partitions going nearly to the floor and ceiling enclose toilets, urinals, and showers with individual changing areas.  These communities also focus on gender equity as a theme that guides programming and community building. These wings are safe, inclusive and affirming communities and are designated as mixed gender, allowing rooms selected for man-identified residents and rooms selected for woman-identified residents on the same wing.  Single rooms and gender inclusive rooms are an available option on these wings for students whose sex assigned at birth does not match their gender identity.

Residential Life offers a wide spectrum of housing options in terms of gender: