The Scandinavian Cultural Center is excited to welcome three Icelandic literary aficionados and well respected authors to PLU. They will give three short lectures followed by a round-table discussion of Icelandic literature’s impact on the world’s literary scene. The event, from 4pm to 6pm, is free and open to the public thanks to Iceland Naturally and the Icelandic Consulate of Minneapolis.

The line up is:

Gísli Sigurðsson and Örnólfur Thorsson will discuss the Old Icelandic Eddas and Sagas and their oral and literary merits, first as a window into the prehistoric intellectual world view in Northwestern Europe as it had been expressed for ages in mythological terms, and second as creative literary works of narrative fiction, inspired by the learned milieu of the individual authors at the time of writing in the 13th and 14th centuries. Gísli dwells on the multicultural society of the first settlers in Iceland in the 9th and 10th centuries and how they managed to cultivate customs, traditions and artforms that do not have any direct parallel in the Western World but which can be explained with the fruitful mixture of cultures and learning and creative individuals who stood behind the literary activity in Iceland during the Middle Ages, as Örnólfur will address, leaving us works that have managed to inspire artist down to the present day, not only in Iceland (Guðmundur Andri), Germany (Wagner) and England (Tolkien) but also many of the scriptwriters in Hollywood. He will discuss the new translation of the Complete Saga of the Icelanders into English, German, Danish, Norwegian, and Swedish.

When their neighbors from Denmark, Norway and Sweden were going on Viking raids, plundering countries in Europe, the people of Iceland, a small nation of Nordic and Gaelic origin living on an isolated island in the Atlantic Ocean, were gradually turning into Paper Vikings as Guðmundur Andri will elaborate on, winning their battles and deeds in words that would eventually end up on paper. They were dreamers, poets and storytellers, and they kept on writing for centuries in their own and gradually more obscure language that had once earned them a living in the northern world. As Iceland fell off the European map, its people continued to copy and add to their extraordinary heritage, even when no one in the outside world could or cared to read it. For Icelandic writers today, this heritage is both a privilege and a burden. They are keepers of a proud tradition, but they must also look to their own times, reflecting the profound social upheavals of the twentieth century that saw Iceland emerge as a modern Scandinavian nation, and the economic boom followed by devastating collapse of the twenty-first. Guðmundur is an accomplished modern author, himself on the pursuit of new Paper Vikings. 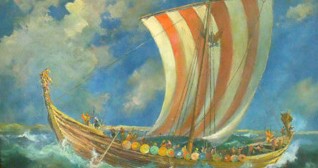 Icelandic literary culture is rich and vibrant, with a large percentage of the population participating in that activity, both as avid readers and skilled producers of written texts. Most Icelanders know a published author, if they are not one themselves.

The three authors visiting PLU on October 16th are especially well known for the way they straddle popular culture and academic analysis. Gisli is a Professor with the Arni Magnusson Institute, and is the more research intensive of the three. Örnólfur Thorsson was the editor of a major new translation project of the Icelandic sagas and, as the Secretary to the President of Iceland, played a major role in public perception and appreciation for Icelandic literature. Guðmundur Andri is a successful author of several works of modern fiction, including Valeyri Waltz, which has been translated into English.