You Will NOT Hear Him Say, ‘That’s So Gay’

Devrin Hoefer ’14 no longer has any use for the phrase “That’s So Gay”—not as a “joke,” not as a putdown, not in his vocabulary, period.

It’s a phrase he might have tossed out offhandedly in elementary school— maybe—but never in high school or college, Hoefer said.

“I stopped when I found out some of the people I knew were gay, and I didn’t want to insult them or put a negative connotation to being gay,” Hoefer said. “I did not want to make those people feel uncomfortable with my language.”

Which is the whole point of PLU’s powerful My Language/My Choice campaign: What you say can hurt, but what you don’t say can help.

“Everyone hates feeling looked-down upon and feeling small in a situation and feeling uncomfortable,” Hoefer said. “By me not using those words, I don’t put people in that position. … I just care about their feelings. I don’t want them to feel any less than human.”

By me not using those words, I don’t put people in that position. …I just care about their feelings. I don’t want them to feel any less than human.”

Hoefer learned the power of compassion—and rejection—at a young age, and in a tragic way. And it informed everything that came after.

“I grew up around gay people, and I had an aunt who was gay (my best friend’s aunt, who I called my aunt),” Hoefer said. “Her family didn’t approve of her being gay. She ended up committing suicide for being gay. I cared about gay rights before that, but I full-blown was not gonna take any (crap) against LGBT. It was a pretty bad experience. This happened when I was about 14.”

By the time he got to PLU, Hoefer said, “I had a good amount of knowledge about language and how to use it, but I still was unaware of some LGBT words. I learned they called themselves queer, and I thought, ‘You don’t say that … no!’ But to LGBT people, it can mean a word that they now own. Queer has many different meanings to different people, and I didn’t know that. I never would use those words. I just was surprised—it was cultural shock hearing someone call themselves queer, like calling myself the N-word.”

I’d see my poster on professors’ doors and thought I was pretty cool. I should have signed them.”

As a Rieke Scholar—selected to reaffirm PLU’s commitment to inclusiveness and diversity— Hoefer was a regular volunteer at the dCenter. So when Lace Smith, who then worked in Student Involvement and Leadership, approached Hoefer for the poster campaign during his sophomore year, he was all in.

His poster was a hit. “My group of friends thought it was a positive experience. I didn’t really get a lot of flak for it,” Hoefer said. “I’ve gotten a lot of, ‘You’re famous now!’ I worked Campus Safety and walked around at night. I’d see my poster on professors’ doors and thought I was pretty cool. I should have signed them.”

And now, as he transitions from “poster student” to “billboard student,” Hoefer is all in all over again for the “service” component of PLU’s public-service campaign.

“(My Language/My Choice) makes people think before they say, so it doesn’t make people uncomfortable,” he said. “They are more aware of the environment around them and just in general, how saying certain things can make somebody feel uncomfortable or depressed.”

Arrived with dreams. Left with passions. 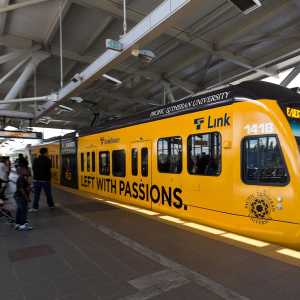 Arrived with dreams. Left with passions.

The Story Behind the Six Word Story—in His Own Words