The Word-Choice Campaign Everyone is Talking About

It seems fitting that PLU’s My Language/My Choice campaign grew into something giant—it’s evolved so exponentially and organically over the years, there really was no other way to go.

Originally spurred with a $500 Diversity Center grant from The Pride Foundation, the campaign focused on queer identities and hurtful words surrounding them, said dCenter director Angie Hambrick, who teamed with Lace Smith, then with Student Involvement and Leadership, to turn those ideas into art. The first posters, which appeared in 2012, featured students tearing up phrases including “That’s so gay,” “Lame,” “Retarded,” “Ghetto,” “Fat” and “Illegal.”

“We then decided to expand the words,” Hambrick said. “We really wanted the campaign to be about individual choice—words that they’re hearing and words that they’ve chosen not to say. They’ve heard those words—maybe even used them—but they now understand these words have impact even when the intent is not to hurt. We have to take responsibility for the impact on others, and on ourselves.”

Now those original posters—along with newer ones featuring more students, more I-won’t-say-these-words plus faculty and staff—are showing up on 112 billboards throughout the Puget Sound region, in Tacoma Public Schools, on the PLU campus, on social media, on the PLU website—and in a brand-new K-12 downloadable teachers kit.

Once the first posters came out, word spread quickly. They landed on impact boards all around campus: in residence halls, at the dCenter, at the Center for Community Engagement & Service, at the Women’s Center, on faculty office doors and in the library.

You Will NOT Hear Him Say, ‘That’s So Gay’

ML/MC images uploaded on social media went viral—and international—with 200 Facebook shares and 5,000 on Tumblr, receiving support from students, staff, faculty and the community, Smith said. High-school and university colleagues across the country contacted the dCenter for high-resolution copies of the series for their schools. The Australian National University asked about creating an ML/MC sister campaign. One professor from Saint Martin’s University was so taken with one particular poster, she had the student sign it.

“One group used the campaign for a Capstone project and asked for feedback,” Hambrick said. “The feedback was, ‘We want more.’”

Mission accomplished. The next phase brought in student-athletes, who ripped up the word “retarded.” Women of color tore up “angry,” “exotic” and “passive.” Another woman shredded “dumb blonde.” Faculty and staff jumped on board (“man-hater,” “That’s so gay,” “exotic”).

And then came a series of Lutes who are Tacoma Public Schools graduates, shutting down “ghetto,” “too white for the black kids” and “What are you?”

I’m making a conscious choice not to use a word, and I am taking personal responsibility about my actions.”

The idea for those last few, Hambrick said, is to hang each graduate’s poster in his or her Tacoma school.

The teaching kit introduces the concept into even more schools—and spreads an awareness that’s increasingly important.

It’s also important, Hambrick said, that the campaign focuses on personal choice rather than a directive. “It’s not, ‘You don’t do this,’” she said. “It’s, ‘I don’t do this.’ We can only be responsible for ourselves.

“I’m making a conscious choice not to use a word, and I am taking personal responsibility about my actions. It sounds selfish, but it’s about me—I have control over my actions, and that’s the real spirit of the campaign.” 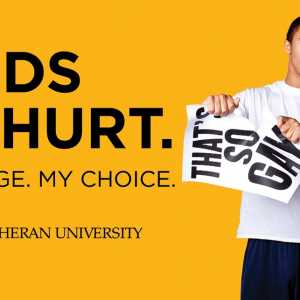