The desire to share her inspiring story with the whole planet. Or …

The desire to dig a hole, crawl into it and ponder what, exactly, you’ve done with your life lately.

Let’s go with the first—shall we?—and leave any digging to Hunt. (She is, after all, a trained archaeologist—actually, a paleo-oncologist, to be specific, partly because she’s also a cancer survivor.)

And, because of all those qualities, Hunt, 27, is a TED2014 Fellow. It’s hard to overstate the prestige of that honor, but it’s sure easy to understand why she was selected.

How a Passion Led to PLU

Hunt, a 2011 PLU graduate, discovered her passion for archaeology early.

“Ever since I can remember—ever since my family can remember—I’ve been obsessed with it,” Hunt said from her hometown of Anchorage. “I would watch National Geographic constantly and tear apart the magazines and put them in a special binder.”

She pursued her passion through two years at another (ahem) western Washington university but briefly changed course when she was told her dreams were silly. As a result, she dipped into the Classics sphere.

Next, Hunt decided to test the viability of her dreams in Egypt, where she attended The American University in Cairo and went on her very first archaeological dig, with Donald Redford—a friend of PLU Professor Don Ryan. Hunt ran into Ryan at an archaeology conference in 2008 and happened to mention she was available if, you know, he needed help with any of his digs. 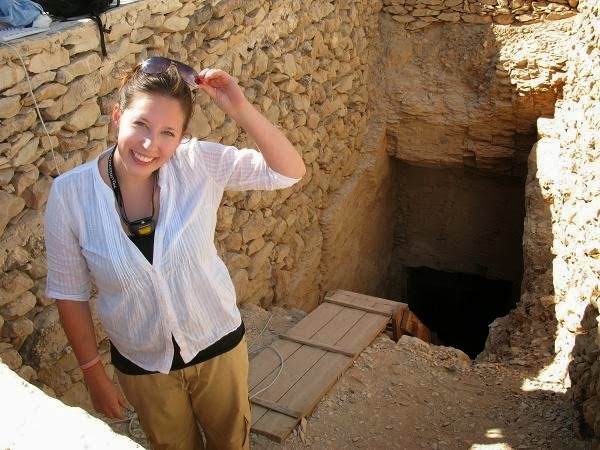 Ryan found her anything but “unfit.”

“She’s pretty impressive in many different ways,” said Ryan, who still keeps in touch with Hunt and, in fact, wrote letters of recommendation for her recent Ph.D. applications. “She’s very unique. She’s always been a kind and free spirit.”

Working in the Egyptian tombs, Hunt learned about the human skeleton, pathologies, assessments and reports—and absolutely loved it all. “I thought, ‘This is exactly what I need to be doing,’” she said.

After that dig season, Ryan told Hunt she should apply to PLU.

“She came over (to Egypt) and did a really nice job,” Ryan said. “She had to go back to school and finish her degree, but she didn’t have any money and thought she couldn’t afford PLU. I said, ‘You never know…’”

Hunt was accepted, with a nice financial-aid package. She started that winter as a junior, pursuing two bachelors degrees: one in Anthropology and one in Classical Studies.

Katie was a pleasure to have as a student and more than a little inspirational. Hands down, she remains the best artifact illustrator I have mentored since arriving at PLU.

“Katie was a pleasure to have as a student and more than a little inspirational,” Andrews said. “Hands down, she remains the best artifact illustrator I have mentored since arriving at PLU. It was gratifying to work with a student who took advantage of getting a variety of experiences, many of them not associated with formal courses—what I call a student who went the ‘extra mile’ to get the most out of her education.” 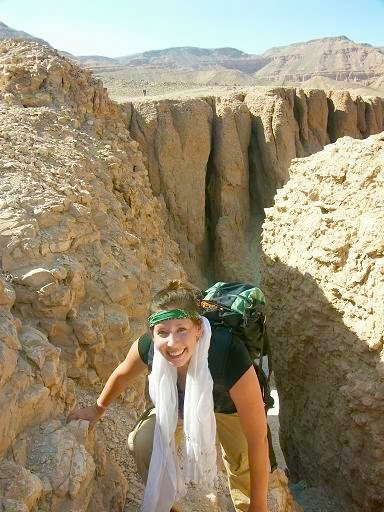 (Photo: Denis Whitfill)Hunt hikes in the Valley of the Kings in 2008.+Enlarge Photo

Hunt didn’t just get an education at PLU; she also got a lot of support. “PLU has been so phenomenal through so much—beginnings, endings and hardships in between,” Hunt said.

Hardships don’t come much harder: In the summer of 2009, Hunt was diagnosed with cancer.

“It was a very, very stressful semester,” Hunt said (in addition to classes, a job and bills, her namesake aunt was losing her own battle with cancer). “I was having a hard time. I thought I had an ulcer.”

Hunt visited a local urgent-care clinic, which performed nine hours’ worth of tests— and sent her home with Metamucil. Naturally, it didn’t work—and the next time the pain attacked, Hunt visited PLU’s Health Center.

“Within five minutes, they told me exactly what I needed to hear,” Hunt recalled. “They saw me and told me to go to the E.R. and get a CAT scan.” 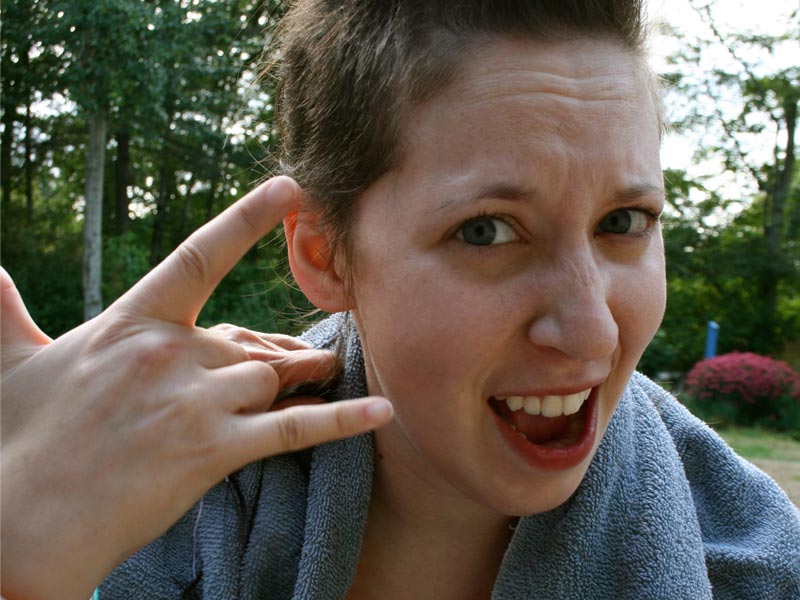 (Photo: Joseph Hunt)Hunt rocks her 'chemo haircut' in 2009.+Enlarge Photo
She went the next morning and learned she had a tumor on her right ovary—too big for a cyst, but certainly, everyone thought, benign. The growth was collapsing her ovary, though, so doctors scheduled surgery right away and assured Hunt there’d be nothing to it. Two days after surgery, on the Fourth of July, Hunt learned she had a very rare, very aggressive, determinedly malignant cancer.

As soon as her recovery began, so did her case to Ryan: Hunt was ready to return to the Valley of the Kings.

“From the beginning, I kept saying I can’t not go,” Hunt said. “Don was so funny. He kept saying, ‘We really wanted you there, but we were just waiting …’”

Within a month or so, they’d jetted off to Egypt again.

“It was the best thing I could have done for my recovery,” Hunt said. 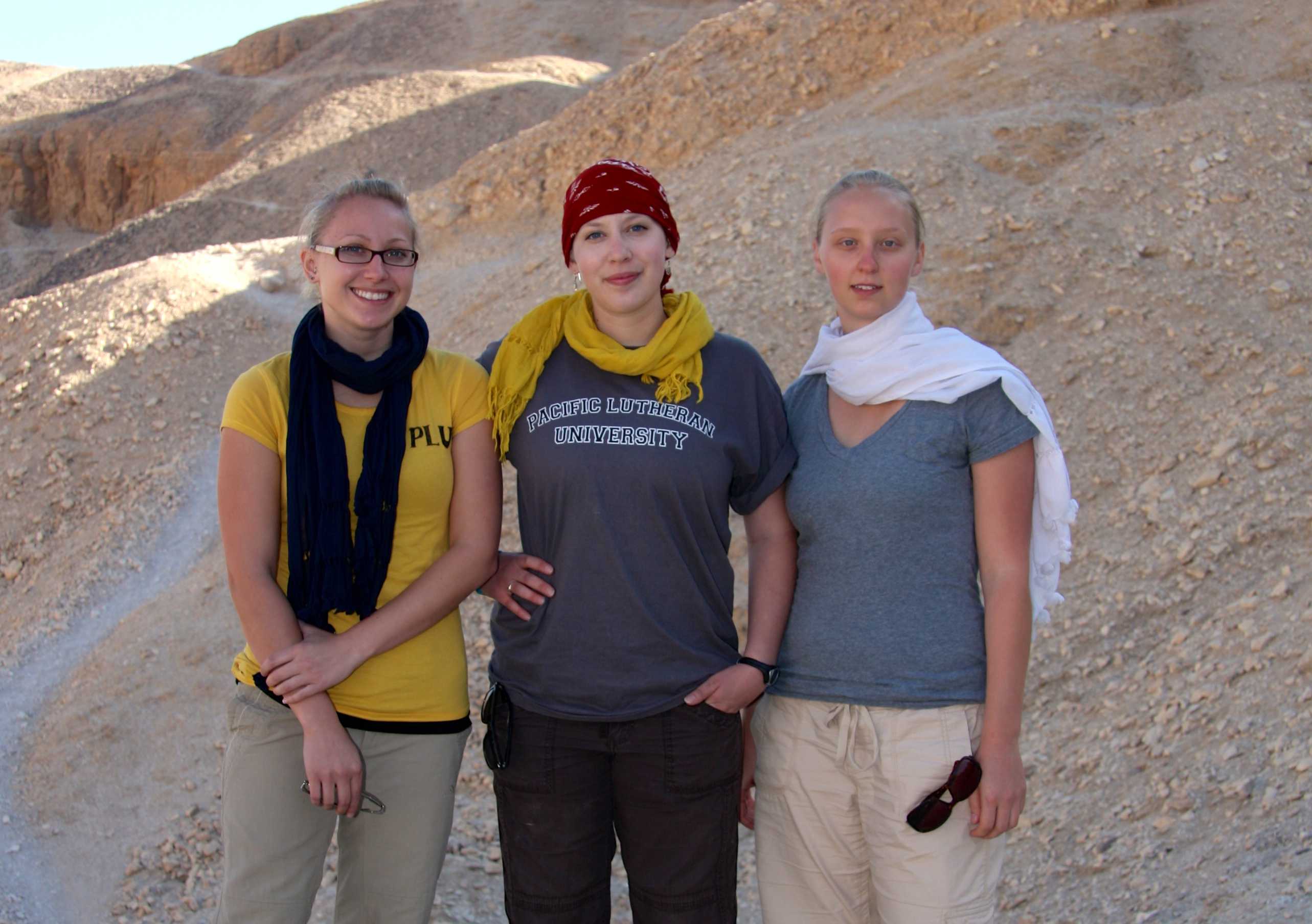 Ryan remembers it well: “She showed up! She was bald and wore a scarf and she was tired, but doggone it, she went with us to Egypt and did a great job.”

Andrews was not surprised; it was just another example of the kind of student Hunt was—and the kind of researcher she would become.

“She always had a great upbeat and positive attitude throughout it all, truly remarkable,” he said. “Her determination and perseverance in the face of such an incredible ordeal demonstrated an exceptionally strong will to succeed and overcome whatever challenge was set before her.”

Hunt has been in remission nearly five years. For the first couple, Hunt said, she wasn’t comfortable talking about her illness, but now, as part of Survivors Teaching Students, she teaches medical professionals in Oregon and Washington—including nursing students at PLU—how to recognize the symptoms of ovarian cancer. 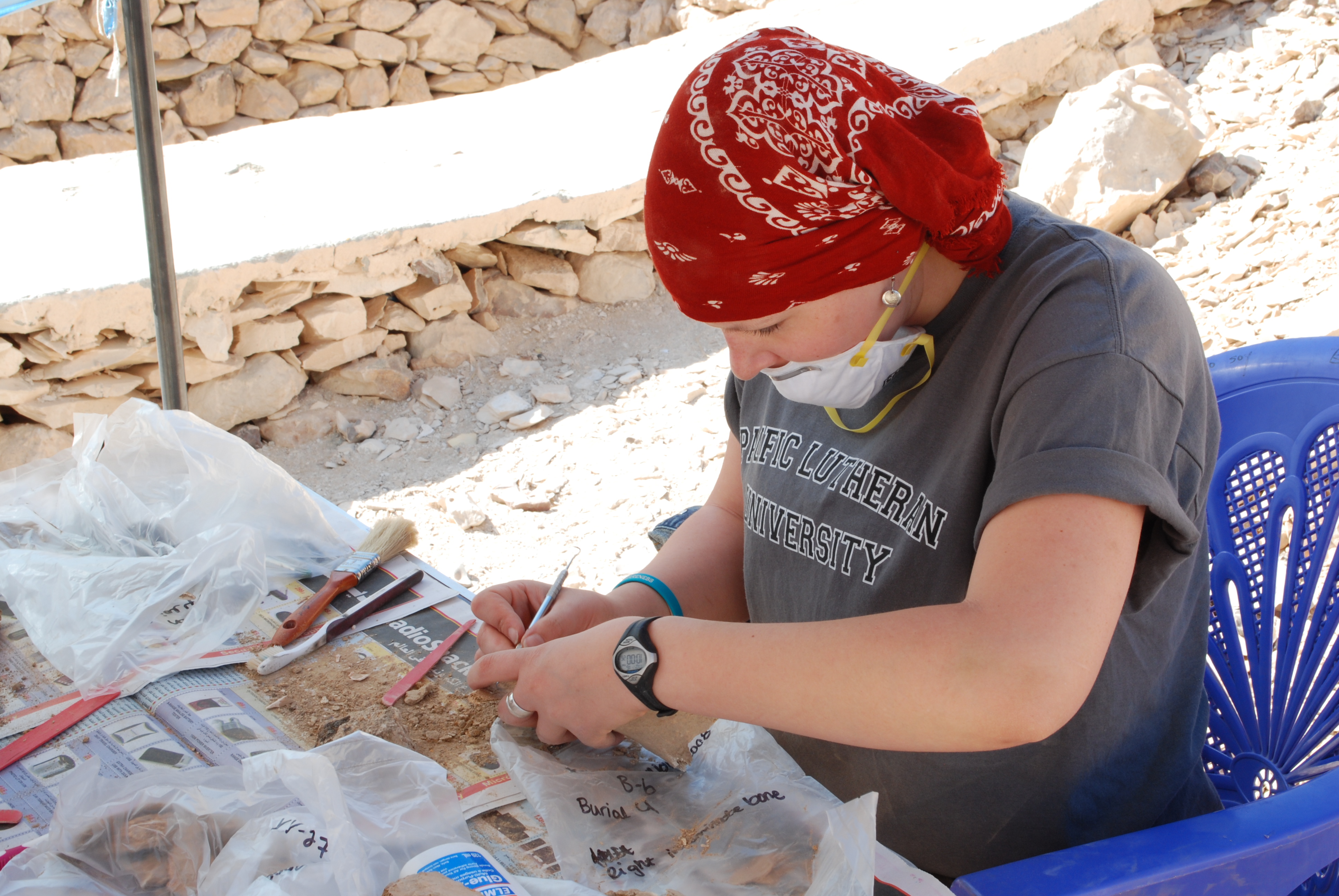 Outstanding in Her Very Own Field

In remission and back at PLU, Hunt did her Classical Studies Capstone on ancient perceptions of cancer in literary texts. “Nobody’s ever written about it, but it’s definitely there,” she said. “Hippocrates talks about cancer; a lot of ancient Greek, Romans and Egyptians talk about cancer. It’s flabbergasting no one had looked into it further.”

I want to look at evidence of cancer in archaeological remains and add to a dataset that’s virtually nonexistent.

After graduation, Hunt moved on to graduate school at Durham University in England, where she earned a master’s of science after blending her PLU degrees—and her life experience—into the emerging field of paleopathology: the study of disease, health, trauma and diet in human biology in ancient societies.

“I want to look at evidence of cancer in archaeological remains and add to a dataset that’s virtually nonexistent,” Hunt said. “At that point I wouldn’t have even called it a field—now it is, but a very, very small field.”

A small field, maybe—but one with potentially huge impact. “She is on the ground floor of a relatively new field that has the possibility of making all kinds of great insights into cancer in the evolution of history,” Ryan said.

As Hunt and other researchers unearth more and more ancient evidence—breast cancer in 3500 B.C. Egypt, osteo-sarcoma in a T. rex femur—Hunt has formed an intriguing theory: She believes cancer is inherent in human beings and is aggravated by—rather than caused by—environmental factors. 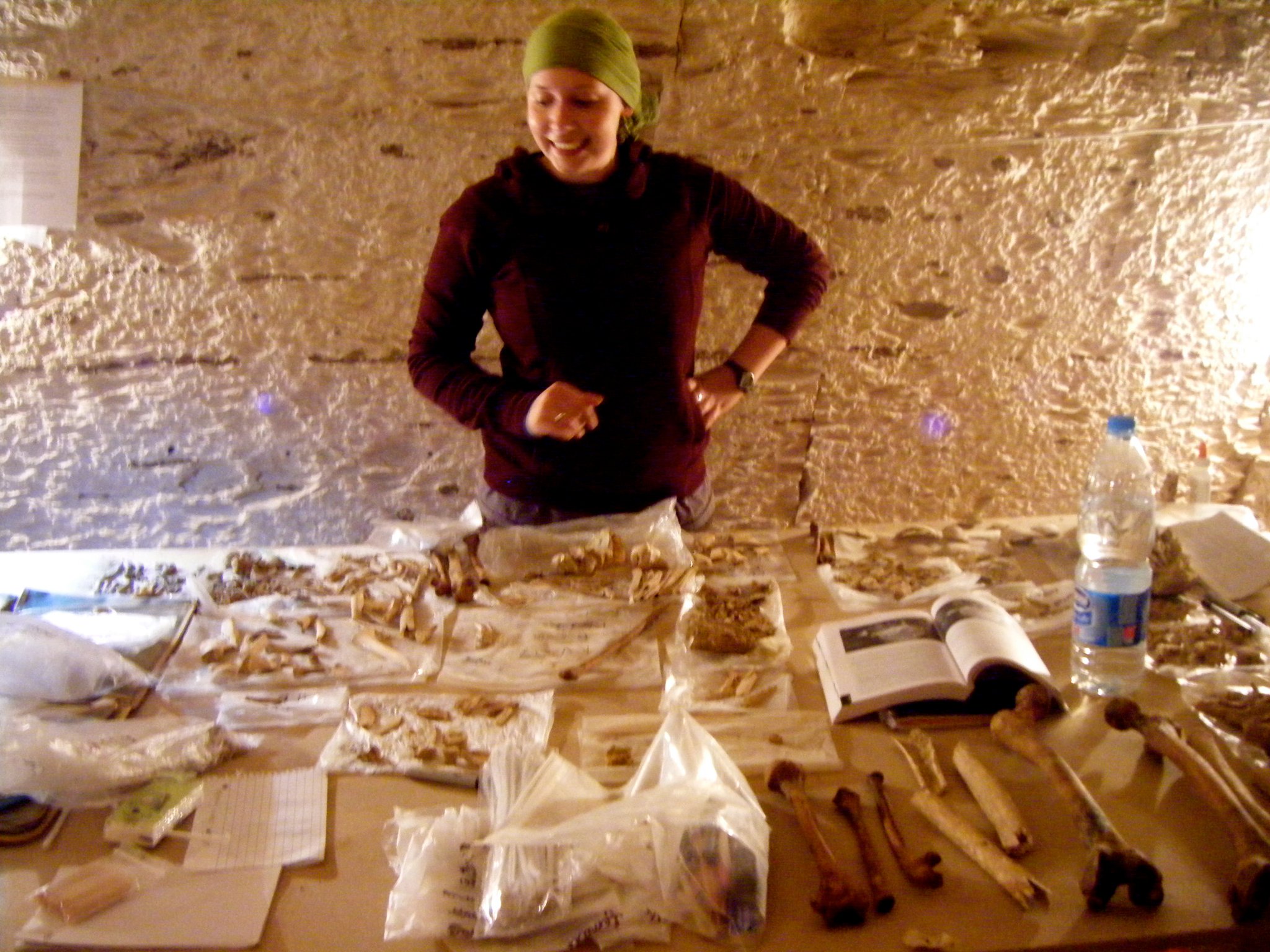 (Photo: Jennifer Willoughby)Hunt works in a bone lab during her post-cancer return to Egypt in 2009.+Enlarge Photo

Her goal now is to gather enough evidence to make larger claims—but, she says, so far, “Not enough people are doing this work to contribute.”

So Hunt is tackling that, too. She and three physical-anthropology friends she runs into at conferences have created the Paleo-Oncology Research Organization.

“Every year we talk about how nobody’s doing this work, and it should be done,” Hunt said. “We have the potential to contribute to modern cancer research, but we need collaboration—between historians, researchers; we need more people to take on this research and share information and collaborate. The faster we can gather evidence, the sooner we can exchange ideas.”

She understands that collaboration is not so popular in academia—though it is a very PLU concept, in the classroom and out.

We have the potential to contribute to modern cancer research, but we need collaboration … the faster we can gather evidence, the sooner we can exchange ideas.

“That’s another huge benefit I got from PLU,” Hunt said. “Learning how to learn is so important.”

Hunt is not done learning yet. This spring, while she awaited word on her Ph.D. applications (one to Ohio State University; one to Arizona State University), Hunt attended three conferences as a participant—and one giant conference as a superstar.

Hunt, humble as she is, never saw the whole TED thing coming.

Two years ago, a friend who’d done a TEDx event encouraged Hunt to apply for the fellowship.

“I didn’t think much of it,” Hunt said—“yeah; yeah; like that’s ever going to happen.”

Hunt was selected as one of 21 worldwide TED2014 Fellows—which officially qualifies her as a “world-changing innovator.” As such, she not only presented at the 30th Talks conference in Vancouver, B.C., but she’s also received training and support to help cultivate her research potential and trajectory.

Nonetheless, she “threw together” an application during a summer dig in Israel, figuring it was “good practice.” No need to get her hopes up. But then, last October, TED called for a couple of interviews. “I talked to them a lot,” Hunt said. “They were selling me on the program.”

“That got my hopes up a little bit,” Hunt said. 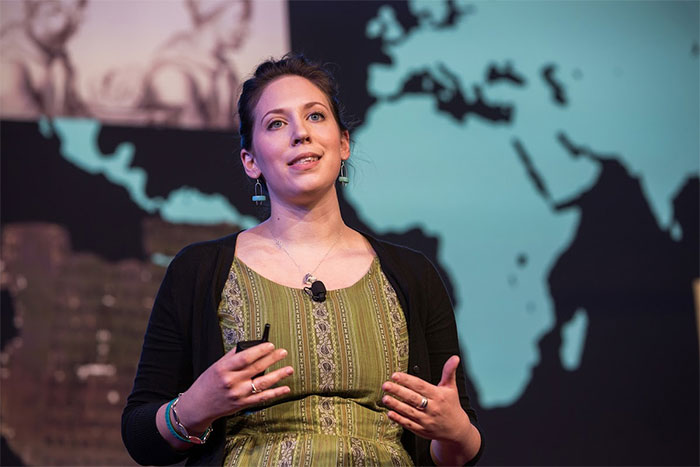 An acceptance email followed, and now Hunt is a Fellow for life—and part of an exciting global fellowship. 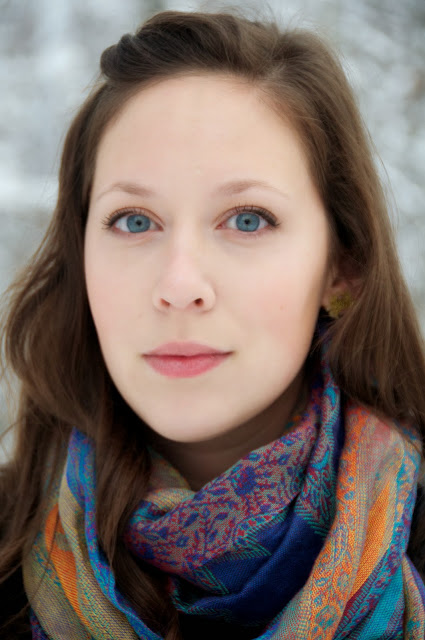 (Photo: Jerry Hupp)Now nearly five years in remission from ovarian cancer, Katie Hunt is concentrating on her education and her career.+Enlarge Photo
“TED is all about spreading ideas that need to be spread, from people who are passionate and really have an opportunity to change the way we think about things and do things,” Hunt said. “The most amazing thing about it is that you are communicating with the other Fellows every day, just kind of learning from each other. People are doing the most amazing things—I just feel so much gratitude to learn from them and talk to them. I’m hoping we’ll collaborate on projects and use each other’s perspectives to find new ideas. It’s fantastic and really inspiring.”

People are doing the most amazing things—I just feel so much gratitude to learn from them and talk to them.

Speaking of inspiring … Hunt’s TED talk—at a conference so high-profile and exclusive that admission was regulated and some tickets cost $15,000—focused on her story: how she came to believe paleo-oncology would be beneficial, and how it’s going to affect modern cancer research.

“I’m an archaeologist first and a cancer survivor second,” Hunt told the crowd.

Of course, we know there’s much more to Hunt’s story than that. Certainly TED audiences were impressed and inspired—but they heard only the first 27 years of it.

Katie Hunt has a lot more story to live.

Sandy Deneau Dunham
Sandy Deneau Dunham has worked as a reporter, a copy editor and an editor and team leader for The Phoenix Gazette, The (Tacoma) News Tribune and The Seattle Times, and as Communications Manager for Town Hall Seattle. She graduated from the University of Iowa with a bachelor’s degree in journalism and has volunteered at the Washington Soldiers Home & Colony (and maintained the website SoldiersHomeStories.com) since 2009. 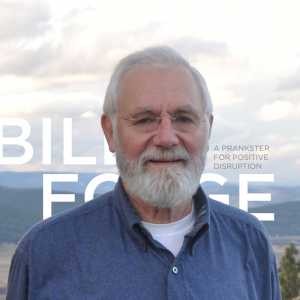