Saving the Lives of Refugee Women

The desperate images would motivate her to develop a simple concept to help pregnant women who have virtually no access to health care: a sparse kit of clean birthing basics that could save the lives of mothers and children.

Røskeland, whose extended family has a deep connection with Pacific Lutheran University and supports her efforts, was born in South Africa to Norwegian parents and subsequently lived in Sudan, Spain and Norway. When she arrived at PLU in 1994, she already lived the concept of global citizenship and knew from an early age that her life’s work would be in health care.

Røskeland founded World Birth Aid in 2010. The non-profit organization coordinates and distributes the birthing kits in areas of the globe where maternal mortality and infant mortality are highest.

The kit, packed in a small plastic bag, consists of a bar of soap, a clean pad, a razor blade, two sterile umbilical cord clamps and illustrated instructions.

“I first witnessed the unhygienic and humiliating conditions women face during birth” while working with the U.S. Department of Health and Human Services in Kabul, Røskeland, 41, said in an email interview. The time was shortly after the U.S. invasion and the hospital had received major improvements, but the labor and delivery unit consisted of one room with five beds.

“Every 24 hours between 60 and 75 women would deliver,” she said. “As you can imagine, it was a chaotic scene where medical hygiene was completely non-existent.”

Since 2003, Røskeland, a certified midwife, has traveled to refugee camps and settlements to help women give birth: Afghanistan, Haiti, the Kenya/Somalia border, Nepal, where clean, skilled hands are sometimes a luxury, not always a caregiver requirement.

“Our birth kits are not a solution to the vast crisis of women’s health around the world in regions torn by crisis, conflict and poverty, but our kits provide a tangible benefit to the women who receive them,” said Røskelund.

According to the World Birth Aid website, “Worldwide infant mortality rates mirror the maternal mortality rates as the vast majority of infant deaths also occur in the same regions of sub-Saharan Africa. … Infection following delivery remains a leading cause of death among both mothers and newborns.”

The kits are assembled and shipped from a medical supply facility in the United States. Partner organizations operating in the communities World Birth Aid hopes to serve receive and distribute the kits, Røskeland said.

Since the organization’s beginnings, the all-volunteer group has produced and delivered approximately 18,000 birth kits, she said. Kits have been distributed in the countries named above and Congo, Guinea and Sierra Leone.

In addition Røskeland has given trainings in emergency obstetric methods and her organization has distributed medication in Liberia and Sierra Leone to assist women with postpartum bleeding.

Røskeland credited her “rigorous education” in Biology at PLU for preparing her well for graduate school and her career as a nurse practitioner. She also found a lasting bond to a family of Lutes.

“Yvonne was actually an advisee of my father, Professor Jerrold Lerum,” who retired from his Biology position in 2013 after 40 years of teaching on the PLU campus, Kari Lerum ’98 said in an email interview. “My dad loves to tell the story of Yvonne sitting in his office and seeing a photo of our family including my brother, and asking, ‘Who is that?’”

“That” turned out to be Karl Lerum ’98. The couple, who both competed on the Lute track team, married in 2003 and have an 8-year-old son, Lukas Røskeland Lerum. They settled in Seattle though frequently have traveled internationally.

“Through my research on HIV/AIDS prevention and care, I could see that what she was targeting was very unique,” said Dworkin, who is a professor of medical sociology and associate dean for academic affairs in the University of California San Francisco School of Nursing. In these areas of great strife “women are harmed the most. Yvonne’s idea was a simple, homemade solution that empowered a woman and her family in her own home to help a woman to give birth. A simple intervention in an area that is challenging to reach.”

“She connects to local organizations that are familiar with the communities in which she works, and she is really good at connecting herself to existing ties,” Dworkin said. “She’s really ambitious. Every time I see her there is another large shipment of birth kits sitting on a ship. She’s involved with everything – the logistics, something off a pier or onto a pier.

While Røskeland has delivered babies in difficult conditions for more than a decade, face-to-face meetings with the mothers who need and use her kits are rare.

She recalled one such meeting while working along the Kenya-Somalia border outside the Dadaab Refugee camp.

“She had delivered her child alone, on the ground, inside of a dirt-floored hut,” Røskeland said, adding that it was obvious that the new mother had used the kit successfully.

Dworkin said that in these areas of great strife “women are harmed the most. Yvonne’s idea was a simple, homemade solution that empowered a woman and her family in her own home to help a woman to give birth. A simple intervention in an area that is challenging to reach.”

B.J. Bartlett
We need to add BJ's bio and get an image. 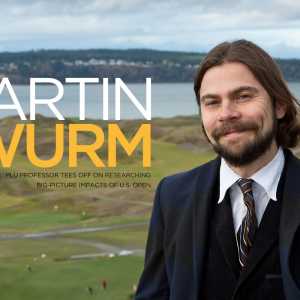 even months have passed since Jordan Spieth won the 115th annual U.S. Open at Chambers Bay Golf Course in University...