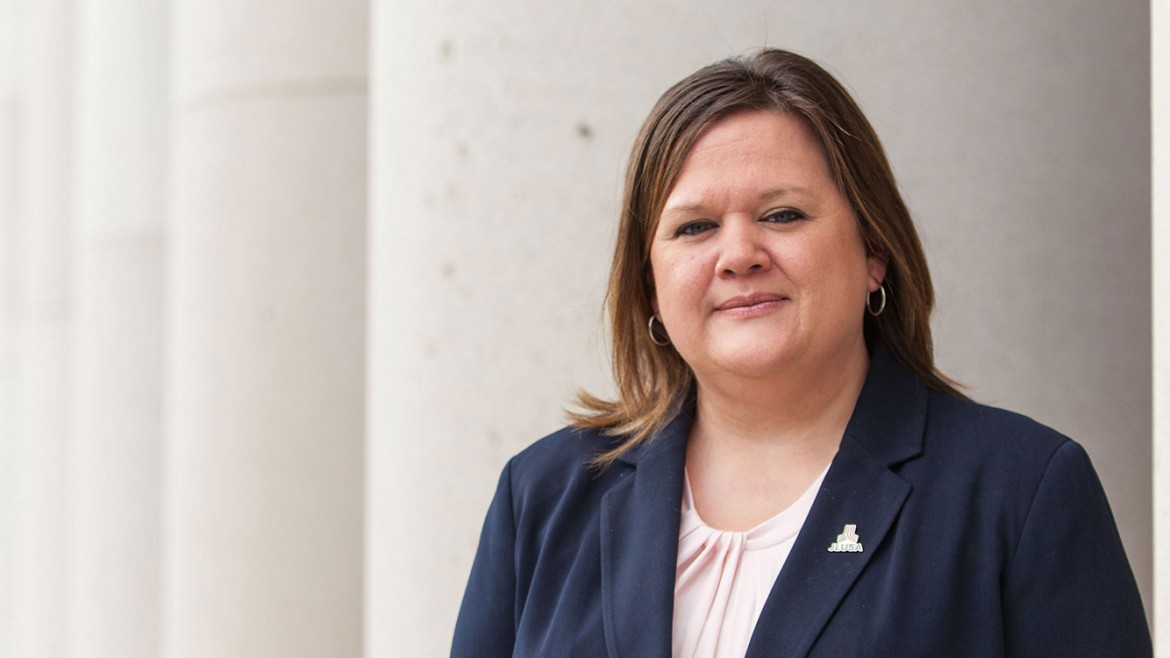 The Washington Supreme Court issued a historic, same-day ruling in November 2017 that affirmed what Tarra Simmons ’00 already knew: her life ahead means more than the criminal record that’s behind her.

“One’s past does not dictate one’s future,” the court wrote in its opinion, issued months after the day that changed Simmons’ life forever.

And the Pacific Lutheran University graduate doesn’t take the miracles, as she calls them, for granted. She’s working to help others overcome the stigma that comes after incarceration, advocating to transform a punitive system into one of rehabilitation.

“There’s a variety of ways we are criminalized for life,” Simmons said. “I am working to change laws that provide more opportunities to people who have paid their debt to society and have rehabilitated, because redemption needs to be part of the criminal justice system.”

If there’s somebody cut out for the job, it’s Simmons — a resilient attorney who overcame more than most to get through law school, and has already accomplished more than many lawyers do in a lifetime.

“Tarra is absolutely the most accomplished person I’ve ever seen,” said John Strait, emeritus professor of law at Seattle University School of Law. His storied career has included advocating for aspiring lawyers facing challenges to their character and fitness applications — the process that eventually propelled Simmons’ bar eligibility to the state Supreme Court. “She’s done more in the time she graduated law school than most lawyers in their entire career, in terms of public service.”

In fact, Strait added, he and other supporters worried Simmons’ case would set a precedent unattainable by those who would follow her.

“We were very afraid she was going to set a standard that nobody else could meet,” he said.

One’s past does not dictate one’s future.

“She quickly became one of my favorite people to work with,” Satterberg said. “She’s a woman who has been through a lot, but faces every day with energy and optimism.”

Those accomplishments merely scratch the surface, and Simmons tackled them all while raising two sons, staying committed to her recovery support groups, and more.

“I still use that foundation I got in prison to center myself,” Simmons said.

It took a long time for Simmons to gain enough agency to center herself. Rewind more than two decades and her resume today would have seemed unfathomable to most.

She experienced trauma from poverty, exposure to drug use and sexual violence, youth homelessness, trafficking at the age of 13, teen pregnancy. It was the latter that inspired her to turn her life around.

“When I had my son, that changed things in my life,” Simmons said. “I wanted to provide a better life for him than what I had.”

So, she re-enrolled in high school, attending Central Kitsap during the day and an alternative school at night to earn the credits she needed to graduate at 16 years old. Then, while studying at Olympic College in Bremerton, she learned about financial aid and the possibility of transferring to a university to study nursing, with tuition covered.

“I didn’t even know those things were possible,” she said. “Nobody in my family had even graduated high school, let alone gone to college.”

At 21 years old, she entered the School of Nursing at PLU in pursuit of a bachelor’s degree. Even though she felt out of place at times, Simmons knew she was academically gifted.

“One area where I had control in my life was where I performed academically,” she said. “I put all my energy into performing well.”

She fondly recalls a PLU nursing professor giving her a copy of a book titled “Emotional Intelligence,” to help her navigate the soft skills she struggled with due to a lack of cultural capital.

Still, Simmons had trouble keeping jobs and internships; in hindsight, she chalks it up to a lifetime of trauma she never processed.

“I struggled with professional relationships,” she said, adding that employers often wrote her off. “I was terminated from my first job out of nursing school and it’s unclear why.” (The employer cited incompatible “fit.”)

Her struggles manifested in her personal relationships, too. Simmons says she gravitated to men with their own traumatic backgrounds, who were violent or unfaithful.

“I thought maybe I didn’t deserve to be treated with respect,” she recalled.

After her father fell ill and eventually died while she was caring for him, Simmons suffered from depression that ultimately led to substance abuse. She was arrested and convicted on drug charges. She served 20 months of a 30-month sentence at Mission Creek Corrections Center for Women in Belfair.

During that time, her husband filed for divorce and she lost her house to foreclosure. She was left with next to nothing.

“That was definitely my rock bottom,” she said.

The turning point came when Simmons entered treatment and a re-entry program while incarcerated. She discovered her faith and gained access to a wealth of volunteers, including PLU alumna Liz (Arne) Lusk. Lusk and a group of Lutheran women sponsored inmates who were on work release.

Simmons received transportation, clothes and other resources from Lusk during that time. Lusk even took Simmons and her son bowling during one of the two days per week she was permitted to leave the correctional facility toward the end of her sentence.

“She did all the practical things I needed,” Simmons said. “She facilitated and made sure I had connection with my children.”

The lifeline of volunteers included a cohort of lawyers, who helped Simmons sort through the legal hurdles that awaited her after prison.

Simmons credits them with preserving the nursing credentials she worked so hard to earn.

“Today I’ve been able to keep my nursing license because I got access to legal information,” she said. “I wouldn’t have known that stuff if I didn’t have access to lawyers and learning about my rights.”

Simmons was so inspired that she started pondering the possibility of her own career in law, but feared her criminal history would keep her from pursuing her vocation.

Strait, the Seattle University professor, told her it wasn’t going to be easy, but it was definitely possible.

“She was making a bet,” Strait said. “I knew she would definitely go through a character and fitness hearing when she applied (for the bar).”

Simmons went all in on that bet. She met with Shon Hopwood, a lawyer and author of “Law Man: My Story of Robbing Banks, Winning Supreme Court Cases, and Finding Redemption.” Hopwood graduated from the University of Washington Law School after serving time for crimes he committed.

“He said ‘you absolutely can (become a lawyer),’” Simmons recalled, “and he told me exactly how to do it.”

Just as she did during her time at PLU, Simmons leaned into her studies and then some. She got to know legislators in Olympia, working on criminal justice reform. She did internships, externships and other work that far exceeded the status quo.

Strait and Simmons were confident when they brought the body of work to the Washington State Bar Association Character and Fitness Board for review, ahead of her bar application.

“He said in all of his life he had never seen a record of rehabilitation like mine,” Simmons said. “He felt really, really good about my chances of winning that. I had so much evidence.”

But it wasn’t enough to convince the Character and Fitness board.

The board’s 6-3 finding stated that Simmons hadn’t had enough time since her release, adding that her “acquired fame has nurtured not integrity and honesty, but a sense of entitlement to privileges and recognition beyond the reach of others.”

Simmons was disappointed that being proud of her story of redemption was misconstrued as entitlement.

“We should be sharing that with other people,” she said. “Our world needs more redemption.”

The state Supreme Court agreed. Her character and fitness case was the first of its kind to be reviewed by the court in decades, and the unanimous, same-day decision was unprecedented. Strait said the court’s ruling that granted Simmons the right to sit for the bar exam paves the way for others facing similar challenges.

“This was the first time since 1984 that the Supreme Court has ever explained what character and fitness means,” he said. “We’re trying to encourage the bar to become more diverse. We want people who know what it’s like to overcome the kinds of difficulties that Tarra did.”

Satterberg, the county prosecutor, underscored the example that Simmons’ energy and optimism has set for those looking to turn their lives around.

“It’s almost like she’s trying to make up for lost time in her career and in her life,” Satterberg said. “She’s an inspiration to people who are in prison and want to pursue their dreams.”

He added that her previous struggles also make her a better public defender.

“A lawyer carries their personal story with them wherever they go,” Satterberg said. “She is a credible messenger when it comes to working with people who have been involved in the justice system, because she’s been able to redefine herself. She’s not a former inmate anymore. She’s an attorney and an activist.”

For Simmons, this is only the beginning.

“I do believe God has a purpose for my life,” Simmons said. “I do the groundwork, but He provides a way.”

Her purpose now is to fight against a punitive system that she says perpetuates a generational cycle of incarceration.

While she admits prison was a blessing in disguise for her, Simmons pushes back against the argument that the prison system offers positive benefits for most individuals.

“You’re in traumatizing conditions, and it’s going to take a really resilient person to go through transformation in prison,” Simmons said. “It would be much more therapeutic and effective if people went to a treatment center or somewhere they were getting their needs met, but not getting the trauma associated with the way we do incarceration.”

Simmons stresses that if something doesn’t change, incarceration will continue to trap generations of marginalized people — those who are disproportionately imprisoned in the U.S.

“The criminal justice system is not meant to just be punishment,” she said. “There needs to be redemption in it, or else it’s going to fail and produce more people who just come back to prison.”

Simmons worries about her youngest son, who continues to deal with the trauma resulting from her past, the death of his grandfather and other struggles. She acknowledges it’s one of the many challenges she faces as her busy career continues to take off.

But she’s up to the task.