14th Annual Jazz Under the Stars

14th Annual Jazz Under the Stars

Jazz Under the Stars at Pacific Lutheran University combines two ideas – provide outdoor, evening jazz performances and the chance to gaze at the stars from the university’s observatory.

Vocalist and Tacoma native Sommer Stockinger will open the annual JUTS on the right note, July 12, at the MBR amphitheater. 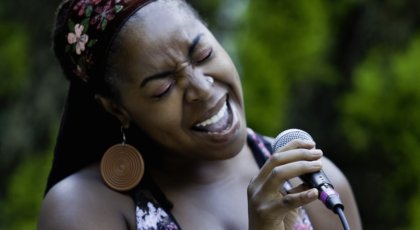 The university event is in its 14th year and has featured returning and new artists every summer. The concerts are free to the public and a perfect way to enjoy jazz in the setting of the Mary Baker Russell building’s outdoor amphitheater. Along with the series being free, refreshments are provided and star charts are passed out for those interested in viewing the night sky from the campus’ observatory. Keck Observatory nights are planned for Aug. 2, 9 and 16.

When: Thursdays from 7 to 9 p.m., July 12-August 16
Where: PLU, Mary Baker Russell Amphitheater

Sommer Stockinger, a native of Tacoma, has been performing jazz throughout the Northwest since 1997. Stockinger has evolved through traditional and Brazilian jazz, blues and R&B, listing her strongest influences as Nina Simone, Chet Baker, João Gilberto, Nat King Cole, Antonio Carlos Jobim, Etta James, Ernestine Anderson, Nancy Wilson, Donny Hathaway and Aretha Franklin. Stockinger has been performing Jazz since the age of 17, and began regularly gigging at local venues throughout Western Washington, particularly in Tacoma and Seattle. Stockinger regularly sits in at Kelley’s in downtown Tacoma. She was mentored by big-band legend and bassist Red Kelley, who was best known for playing with Buddy Rich and Stan Kenton during the reign of the big band.

Tracy Knoop received his musical training at Berklee School of Music in Boston. After leaving Berklee, Knoop joined the world famous Tommy Dorsey Orchestra with which he was a member for 10 years. Knoop has performed with such greats as Ray Charles, Mel Torme, Buddy Rich and Bernadette Peters, to name a few.

Rich Wetzel and his Groovin’ Higher Jazz Orchestra bring an exciting and unique mix of big-band jazz and jazz-rock fusion. The all-star lineup features top performing jazz musicians from all over the Puget Sound. They have three CDs to their credit, all of which hit top-10 rankings with jazz stations all over the world. This nationally renowned treasure based in the Pacific Northwest has been featured by articles in Jazz Improv, LA Jazz Scene, Brass Herald and more.

David Deacon-Joyner is professor and director of jazz studies at PLU. A native of Memphis, Tenn., Deacon-Joyner was mentored by jazz piano great James Williams, and has performed with jazz artists such as Bobby Shew, Marvin Stamm, Marc Johnson, Ed Soph and others. Deacon-Joyner currently arranges big band charts for Jeff Coffin, saxophonist with Bela Fleck and the Flecktones, and the Jeff Coffin Mu’tet, published by UNC Press. He is arranger, vocalist and pianist for In Full Swing, a Dallas-based jazz vocal group that appears with symphony pops orchestras across the United States.

David Deacon-Joyner is professor and director of jazz studies at PLU. He is a native of Memphis, Tenn., mentored by jazz piano great James Williams. Deacon-Joyner came to western Washington from the University of North Texas in Denton, where he held the position of associate professor of jazz studies from 1986 to 2000. He has served as clinician and adjudicator at festivals and workshops in Tennessee, Alabama, Texas, Ohio, Oregon, Nevada, California, New Mexico, Idaho and Washington. He is the lead instructor for the Great Basis Jazz Camp, a summer jazz camp held at the College of Southern Idaho in Twin Falls. Deacon-Joyner has free-lanced for over 30 years in the Memphis, Cincinnati, and Dallas/Fort Worth areas. He ahs performed with jazz artists such as Bobby Shew, Marvin Stamm, Marc Johnson, Ed Soph, and others. Deacon-Joyner is a professional vocalist in both studio and live settings, and is a composer and arranger. He currently arranges big band carts for Jeff Coffin, saxophonist with Bela Flect and the Flecktones and the Jeff Coffin Mu’tet, published by UNC Press. He is arranger, vocalist, and pianist In Full Swing, a Dallas-based jazz vocal group act that appears with symphony pops orchestra across the country.

Bill Ramsay is a jazz legend in the Pacific Northwest. He has performed on alto, tenor and baritone saxophones with many of the world’s greatest musicians, including Frank Sinatra, Mel Torme, Ella Fitzgerald, Joe Williams, the Count Basie Orchestra and Benny Goodman, to name a few. He has criss-crossed the world many times for five decades, stretching from China, Japan, the Hollywood Bowl, Carnegie Hall, and the Concord and Playboy jazz festivals. For 30 years he has been a regular performer and instructor at the Port Townsend Jazz Camp and Festival. Ramsay intersects his performing with stints as an in-demand arranger, conductor and clinician. Along the way, he has earned credits on the Concord Records label, as well as numerous regional and international recordings. Ramsay is a longtime performer on baritone saxophone with the Seattle Repertory Jazz Orchestra, and works with the Seattle Symphony on woodwinds in their POPs concerns. He was inducted into Earshot’s Seattle Jazz Hall of Fame in 1997.