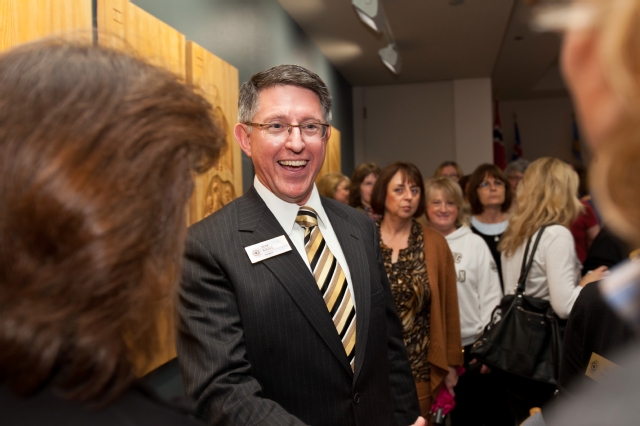 President Thomas Krise is greeted by well wishers at an informal reception in the Scandinavian Center to mark his first day on the job. (Photo by John Froschauer)

Over 200 faculty, staff and students enthusiastically greeted President Thomas Krise and Patricia Krise on Friday, June 1, at a reception in the Scandinavian Cultural Center.

It was the first time that the campus community had seen Pacific Lutheran University’s 13th president since Krise visited in early February during the presidential search process. The search committee and regents chose Krise as PLU’s president on Feb. 28. His first official day on the job was Friday, June 1.

Krise thanked the campus community for the turnout, and then turned to one of his favorite topics: The importance of a liberal arts education.

“The liberal arts education and its value is something we all need to talk about,” Krise said.

It was this enthusiasm and dedication to the liberal arts, and a deep connection with the faculty that first 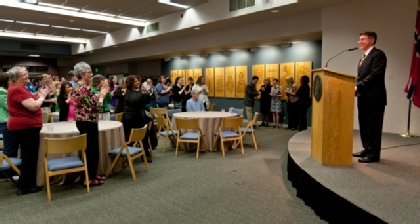 President Thomas Krise speaks to the crowd at the June 1 reception. (Photo by John Froschauer)

“Tom has a legacy of service and thoughtful inquiry,” he said. “In each place he’s been at, he has served with fierce intelligence, creativity and a collaborative approach.”

Angie Hambrick, director of the PLU Diversity Center, and another search committee member, noted that Krise is deeply committed to diversity. In addition, his references said “he was a strategic thinker and planner,” Hambrick said.

He was the founder and first director of the Air Force Humanities Institute, and deputy head of the Department of English and Fine Arts at the Air Force Academy. He also served as president of the faculty senate there.

O’Brien noted that when Krise made the argument for a humanities institute to the Air Force brass, the officials asked Krise why such an institute was needed.

“Tom pointed to the now iconic pictures of Abu Ghraib and said ‘That’s why,'” O’Brien recalled. “He said that with the right type of education, a liberal arts education, you learn to treat each other more carefully, and produce better thinkers and better citizens.”

O’Brien concluded by noting that Krise “is the president we need and deserve for the next great chapter of PLU history.”