TACOMA, WASH. (March. 2, 2016)- PLU professor Seth Dowland’s first book, Family Values and the Rise of the Christian Right, was published by the University of Pennsylvania Press in October 2015. Dowland describes the book as a “culmination” of over a decade spent researching 20th century evangelical Christianity. The assistant professor of religion and affiliate faculty member of the Women’s and Gender Studies program has been published in numerous peer-reviewed journals. He has also lectured and presented at universities and conferences, both domestic and abroad.

Dowland also recently appeared on the Marginalia Review of Books podcast and contributed an op-ed to ReligionDispatches.com that was republished by Salon.com. 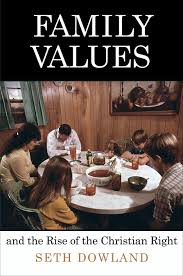 Purchase "Family Values and the Rise of the Christian Right" from Garfield Book Company (PLU's bookstore).