Alum introduces a little titration magic, of sorts, into the PLU chemistry labs

With a click of a mouse, magic – chemically speaking – seemed to happen in a lecture room at the Morken Center recently.

Students and professors gathered around a new spectrophotometer developed by MicroLab Inc.

Results of labs that used to take hours were available in minutes, if not seconds, using the new instrument, six of which (valued at a total of $10,000) were donated to PLU’s chemistry department by alum and MicroLab president John Amend ’60. Amend is also professor of chemistry, emeritus, at Montana State University. 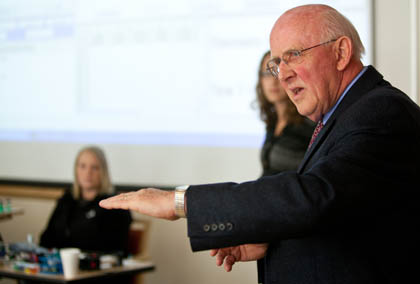 John Amend ’60 explains the use of a spectrophotometer he donated to the PLU Chemistry Department.(Photo by John Froschauer)

Lab supply costs have soared in recent years, Amend said, and he sees this new tool as one way to engage students in chemistry, while keeping down costs as the same time. Amend made his point, as he worked through an experiment that looked at the freezing point of acetic acid and the odd phenomenon of super cooling.

“It’s a good experiment if you want to test what you expect, and contrast that with what you really see,” Amend said, as the sample’s temperature plummeted to 1o degrees centigrade, only to rise to the expected level of about 17 degrees C.  The  new device allows both students and professors “to spend a lot more time thinking about what’s going on,” rather than waiting for the experimental results to occur, Amend said.

After leaving PLU, Amend received his Ph.D. from the University of Texas at Austin, and was a visiting scientist at Oak Ridge Associated Universities. For 38 years he taught chemistry at Montana State University and has taught, by his estimation 29,000 students over the years. He is the author of 11 textbooks and three patents.

He received PLU’s Centennial Alumni Award as one of 100 alumni honored at PLU’s 100th anniversary celebration in 1990.