Suffering from Water in Oaxaca 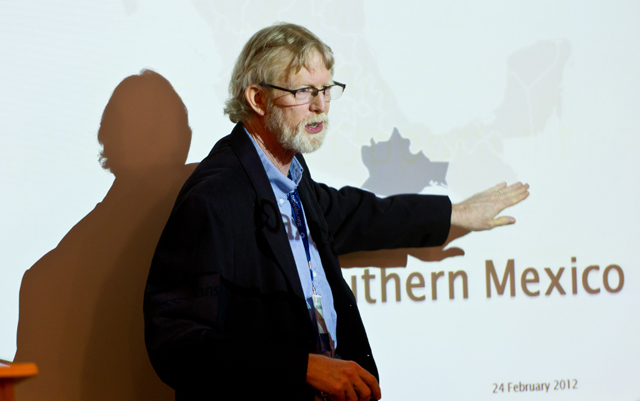 Suffering from Water in Oaxaca

We all need water, said Rick McKenney, executive director of Water for Humans.

McKenney kicked off the second day of the Wang Center’s Water Symposium with a talk about the challenges and opportunities with water and sanitation in Oaxaca.

“Suffering from water – this is what Mexicans say when they are dealing with a lack of water,” McKenney said. “Mexico considers water a public right but there’s a juxtaposition and some tension there. How do you equitably charge people for this asset?”

His answer is to help people use it sustainably.

Water for Humans partners with local and international NGOs, universities and governments to take on projects that improve public health and reduce disease.

“We feel there’s plenty of water, we just need to capture it and use it correctly,” McKenney said.

McKenney highlighted three of their current projects in Oaxaca, Mexico in his discussion Friday morning.

The projects include building 8,000-gallon rainwater catchment systems as part of a rainwater harvesting program in the Bravo Ahuja district of Oaxaca, creating a wetland for sewage treatment in Santo Domingo Barrio Bajo Etla, and working on bringing a drinking water filter system to Valentin Gomez Farias Elementary School.

“That will provide students with clean, fresh water every day,” McKenney said of the filtration system. “This will help the school in the sense that they don’t have to spend out to buy bottled water.”

PLU senior Stena Troyer, who spent her J-term studying Australian examples of sustainable living, was among the nearly 60 people who turned out for McKenney’s talk.

“I really enjoyed it,” Troyer said. “I’ve been in Australia and we learned a lot about wet and dry toilets. It’s just something we don’t think about using.”