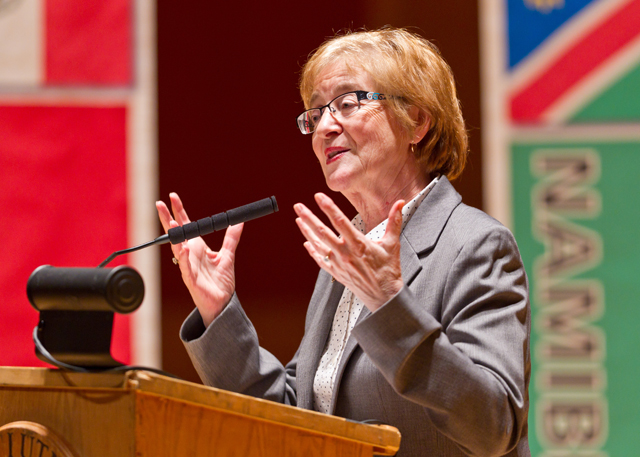 Maude Barlow – National Chairperson of the Council of Canadians and chair of the board of D.C.-based Food and Water Watch – delivers the keynote address opening the Wang Symposium, “Our Thirsty Planet”on Feb. 23 at PLU. (Photo by John Froschauer)

For too long the water supply of this world has been treated like an open tap and the leaders of the world have been blindfolded around a bathtub sucking through a straw, said water activist Maude Barlow to an assembled crowd in Lagerquist Concert Hall.

“There’s lots of water, until there’s no water at all,” the keynote speaker of the 2012 Wang Symposium – Our Thirsty Planet, told the crowd. The address marked the inaugural PLU Norwegian-American Annual Lecture.

“First and foremost, we are a planet running out of water,” Barlow said. “What we actually have to get our heads around is we are actually coming to the end of water.”

In many parts of the world, rivers and fresh water sources that seemed endless are drying up or have been so baldy contaminated the source is no longer drinkable.

Barlow is a water activist who has fought for water as a human right – a right that was recently expressed by the United Nations, although many developed countries like the United States abstained from voting, she said.

The threat of losing water is not just one of environment or over use, she said.

“It is the black gold of our time,” Barlow said.

Water is a commodity that is being sold on world markets and being used in third world countries, so developed countries do not have to bear the burden of contamination, exploitation and overuse. It is becoming a privatized commodity. Barlow told symposium attendees of struggles in Bolivia, where corporations purchased water rights and sold access to water to who could pay, she said. The struggle centered on access to clean water to live as a basic human right. She recalled what an activist told her when asked why fight for such a cause: “I’d rather take a bullet to the head than to die of thirst and I’d rather see my child die from (a bullet) rather than die from dirty water because I know what that looks like.”

“It’s been a life and death struggle,” Barlow said.

The symposium addressed how vast the issues surrounding water actually are. There is no time to delay, Barlow said.

“It isn’t a case of if, it is a case of when,” she said. “You can be right wing or left wing, running out of water is a pretty serious thing no matter what wing you come from.”

But it isn’t just a matter of legislation and blame can’t be placed solely on corporations and governments, Barlow said. The fault lies with all of us, and all of us buying into “the myth of abundance.”

First our attitude toward water needs to change, and then we need to see how water relates to other issues, such as education or political exploitation.

“Water is the great teacher. It opens everything,” Barlow said. “Dare I say, we have to start seeing water as sacred.”