Image: Nicole Laumb ’11 traveled for three months over the summer with Flynn Creek Circus, an animal-free circus in California. (Photo courtesy of Laumb)

“The giggles were endless,” she told her loyal Facebook followers at the end of the tour with the Flynn Creek Circus, based out of Mendocino, California. Laumb’s final post rounded out months of social media updates that included videos and photos of her doing spins and splits on a rope with a hand loop — a routine called Spanish web — above 63 audiences throughout 10 cities.

A winding vocational path led Laumb to the circus life. She earned a journalism degree at Pacific Lutheran University, as well as a minor in sociology. She bounced around between various extracurriculars during her time on campus, including working as an ally at what was then known as the Women’s Center (now the Center for Gender Equity).

As Laumb approached her senior year, she didn’t really have a clear picture of what she wanted to do after graduation. When the time arrived, Laumb dabbled in a few different jobs, such as working for a parks and recreation program and as a freelance writer at the Puyallup Post. But something just wasn’t clicking.

“I wanted to see what else grabbed me other than journalism,” she said. So, after a stint with National Civilian Community Corps, a branch of AmeriCorps, and teaching kids garden art as part of an after-school program, Laumb decided to turn a quirky hobby into a fun new job.

She traveled and performed with the Flynn Creek Circus, an animal-free circus, for three months over the summer. The circus showcases knife throwing, flying trapeze, hoop diving and more. Laumb said it’s a contemporary circus with French-influenced flair in which everyone runs everything. She said it’s such an intimate setting that the performers, dressed in steampunk attire, serve attendees cotton candy.

Laumb said her PLU education served her well while traveling with the circus. She used her communication degree more working with Flynn Creek than she had during any other points in her life. “That’s been a nice surprise,” she said. 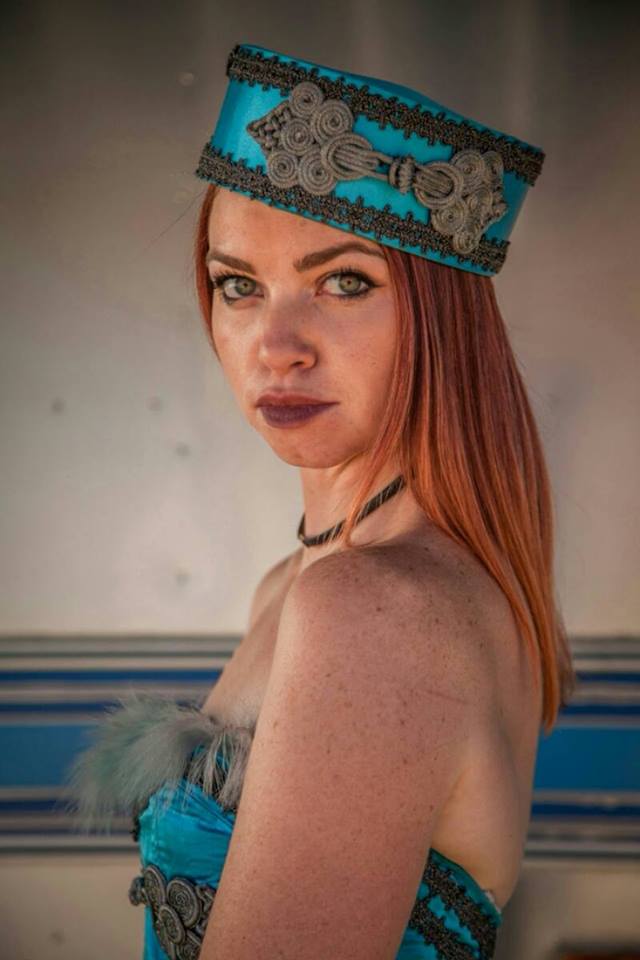 Laumb says she heard about the opportunity by word of mouth, pointing to the circus’ popularity. “The director of operations knew I was a circus junkie,” Laumb said. “She had me interview for a position and (I) ended up working at the box office and being a company member.”

Laumb already had some training. She was honing her skills in aerial silk performance at CircusMecca — Mendocino Center for Circus Arts. Aerial silk performance is a form of acrobatics. Performers hang from panels of the soft, lightweight fabric and do tricks. So, Laumb decided to test her skills on a rope in front of Flynn Creek audiences that totaled more than 8,000 people over the course of the tour.

Laumb said she’s proud of the progress she has made over three years of circus training, and is happy to perform as a company member in addition to her main gig as box office manager. The mainstage performers with Flynn Creek — The Daring Jones Duo, Selyna Bogino, Ross Travis and Terry Crane, to name a few — have been a huge influence on her, she said.

“(They) really inspired me to want to explore other sides of circus,” Laumb said, such as exploring higher levels of athleticism and creativity. “They are a huge part of my circus journey.”

Laumb lived the tour-bus life for three months and had a blast on the road. 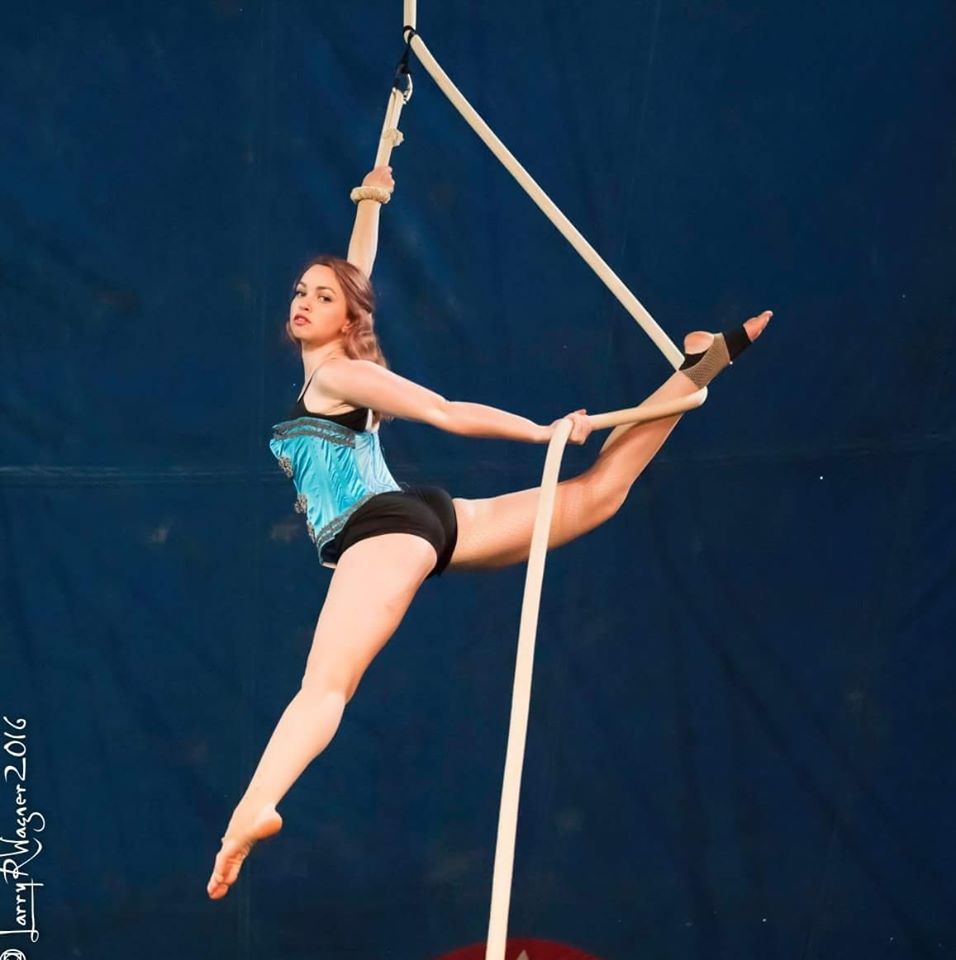 Every now and then, the circus crew would attend some of the events happening in the towns where they traveled, to help spread the word about the circus and maybe give sneak peeks to willing audiences. One of those times, the willing participant was a nun in Calistoga, California, who Laumb said volunteered to have two performers juggle around her.

Now that the circus life is over, Laumb has returned to working with kids in the after-school enrichment program. She says her interest in farming attracted her to the job, and she hopes to open her own farm and circus program for kids someday. She still finds time to embrace her circus side, teaching aerial silks twice a week as part of the same program at the Community Center of Mendocino.

“There is a really high demand for young kids to do circus,” she said, “so CircusMecca does quite a few children’s classes at the community center and at the main gym in Mendocino.”

She is continuing training at CircusMecca, working on lyra (aerial hoop), silks and Spanish web. “I’m trying to see how far I want to get into performing, so I’m devoting more of my time to it,” she said.

Laumb plans to continue touring with the Flynn Creek Circus, which kicks off another tour in June 2017.

“It’s such a wonderfully absurd show,” she said. “There’s something for everyone. I highly recommend everyone run away with the circus once in their life.” 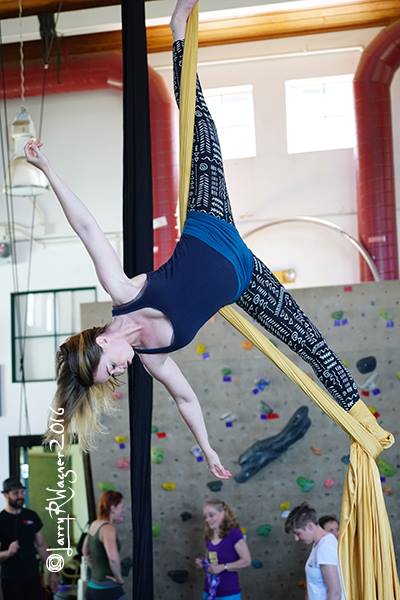 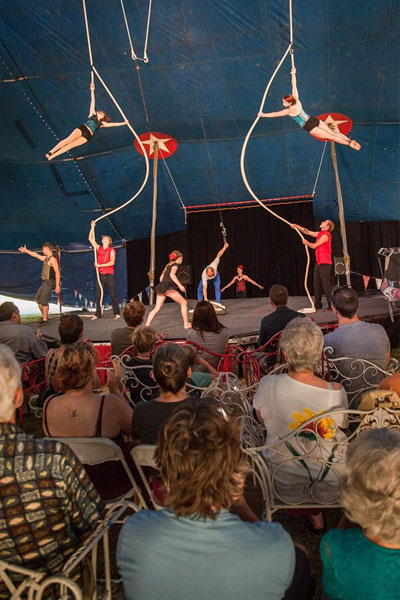