The Legend of Sankta Lucia

Lucia was born to a wealthy family of the nobility in Syracuse on the island of Sicily in the year 284 AD. Her name derives from lux, meaning light. Her father died when she was still an infant and her mother raised her in the new Christian faith. At an early age, Lucia made a secret vow to remain a virgin and to devote her life to serving Christ and the poor. When she came of age, her mother wanted her to marry a man who was not a Christian. During this time her mother became ill, so she and Lucia would go to the tomb of St. Agatha to pray for her mother to be cured. Her mother was cured and, at this time, Lucia told her mother of her secret vow. Her mother, being grateful for being healed, agreed to this. Lucia’s suitor was very unhappy at losing the beautiful young woman and her dowry. He reported Lucia to the authorities as aiding and abetting the Christians. This was, of course, during the time when Christians were being persecuted, thrown to the lions, and burned at the stake. When Lucia refused to renounce her Christian faith, she was ordered burned at the stake. The fire would not light, so she was stabbed with a sword. Lucia became a martyr, as many others had before her.

It isn’t exactly known how the legend of Lucia traveled north to become part of the traditions of Sweden and the other Nordic countries. 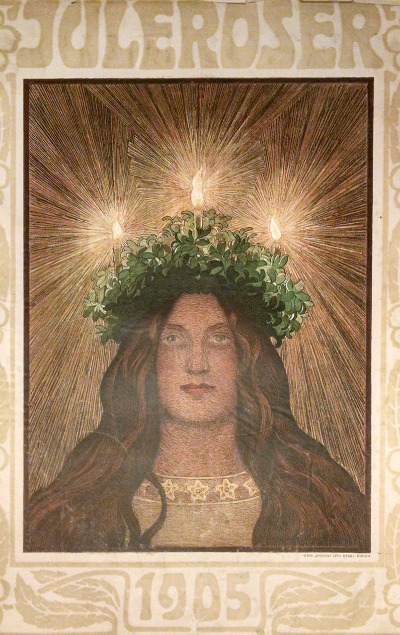 Perhaps it came through tales of Viking travelers. Some believe it came through Germany and traveled north by seamen and traders. One story tells of Lucia coming on a ship, in the cold, dark winter, bringing food during a famine in Sweden. Under the old Julian calendar, December 13th was the shortest day and longest night of the year. This was the day Lucia came bringing light and hope in their darkest time of year.

In more recent times, the tradition has changed. A daughter of the house, usually the eldest, rises very early on December 13th, Lucia Day, bringing coffee and saffron buns to her parents and family. She wears a white dress and has a wreath of candles on her head. Lucia celebrations also take place in towns, churches, and schools throughout the country.

The Sankta Lucia Fest has been an annual tradition at Pacific Lutheran University for over half a century. It is a very important tradition to the people of Sweden, and it is our desire to keep the tradition alive for Swedes and other Scandinavians in this area. Although it is not a religious ceremony, the Sankta Lucia celebration marks the beginning of the Christmas season, in Sweden and at Pacific Lutheran University.