The Scandinavian Cultural Center is proud to annually award a PLU student with a Lucia scholarship, given in honor of Betty Larson, a long time supporter of the Center. This $1000 award goes to the student who most embodies the quality of Sankta Lucia.

This year (2020), the candidates who apply for the scholarship will write an essay describing ways in which they embody and articulate the Core Elements of Lutheran Higher Education (https://www.plu.edu/lutheran-studies/core-elements/). The applicants will be interviewed by the Scandinavian Cultural Center Council’ Lucia Committee via zoom. They will also help with fundraising for local food banks. The essays and service are considered in determining the awarding of the Lucia Scholarship.

Normally, the pool of candidates who apply for this scholarship participate in the Sankta Lucia Festival by working with children on dances and crafts, and singing the Lucia songs at nursing homes, charity events, and at the public event at PLU. They also write an essay describing how they embody and articulate the Core Elements of Lutheran Higher Education. Then all of the applicants are interviewed one-on-one by three members of the Scandinavian Cultural Center Council. The essays, interviews, and sense of service as exemplified through participation in the Lucia Festival are all combined to determine who should be crowned PLU’s Lucia.

Lucia Candidate orientation, rehearsals, and interview dates will be announced by mid-October, 2020. 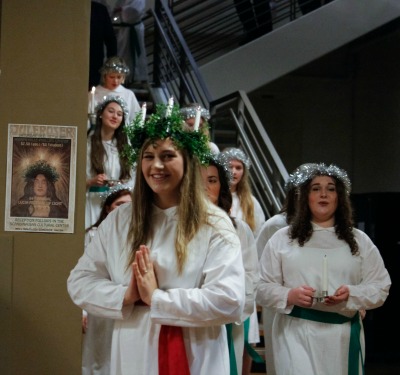 Past winners of the Scandinavian Cultural Center Lucia Scholarship are: