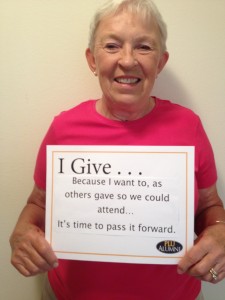 Phyllis (Grahn) Pejsa ’55 is a Lute through and through. Her family’s history with Pacific Lutheran University spans generations, making their legacy truly inspirational and valued. When asked why Phyllis established the B.G. “Bob” Carroll Memorial Scholarship, she was kind enough to give us her story and share why her Lute roots run so deep.

“Back in the mid-1970’s, my parents — C. A. and Olga Grahn — established the first charitable-remainder trust scholarship at PLU. At the time PLC gained university status in the 1950’s, my dad served on the PLC Board of Trustees and then Board of Regents for about five years. They became very loyal supporters of PLU. Dad served two years as president of Q-Club in the ’70s. When their grandchildren, who did not live in the Pacific Northwest, were approaching high school graduation years, my folks were working with David Berntsen in establishing the charitable remainder trust to be named the “C. A. (Clare) and Olga Grahn Scholarship”. They also looked for an opportunity to make attending PLU too good for their grandchildren (one boy and seven girls) to refuse. Their solution: we will pay for your board and room (continued to cover their off campus housing when they were upper class women) if they attended PLU. Six of their grandchildren and three great grandchildren would go on to attend PLU.

After my second husband, B.G. “Bob” Carroll and I married, he was introduced to PLU and became a “PLU fan”. His college experience was at Eastern Washington University, majoring in business administration. Though he did not graduate, he strongly supported the value of a college education, especially from the smaller schools. When he died in 1988, I established the scholarship in his name as a lasting memorial to him and to be awarded to a junior or senior business major who is also active in extracurricular activities. We had both felt that these characteristics spoke to future business leaders.” 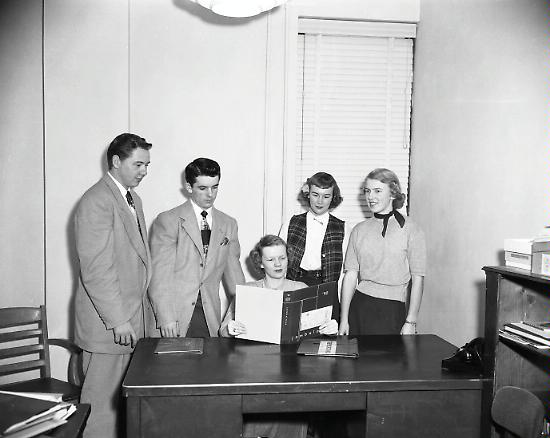 Phyllis (far right) was on the SAGA Editorial Staff in 1953.