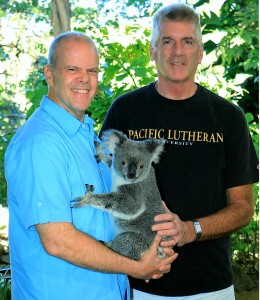 Ronald, left, holds a koala with Michael by his side.

Michael Carson and Ronald Steigerwalt have been dedicated supporters of PLU for years. We are grateful for their loyalty and kindness to the University, and for sharing their story with us regarding the establishment of the Dr. Ronald Steigerwalt Endowed Scholarship.

“I (Michael) was a bit delayed in the gift-giving department. I guess graduating in a recession didn’t help. Now though we have been active donors for over 20 years. Why give to PLU though? Just spend some time with PLU students and you will have your answer. I tell people all the time that Lutes are the most amazing, dedicated and driven-to-make-a-difference students anywhere. PLU musical groups have performed at our Episcopal church a couple times. Years later people are still are talking about how impressed they were.

We refer to my husband Ron as the “Pre-Eminent Toxicologist in the United States”. He graduated from the University of Rochester and got his Ph.D. at UC-San Francisco. I know I am biased but he is brilliant in his field. He is only an honorary Lute, but for our 30th Anniversary we could think of no better gift than establishing an Endowed Scholarship in life sciences in his name at PLU. What could be greater than a continuing legacy of helping students studying in the fields of medicine & science?”