Allen Morris, the grandson of Lillian C. Anderson, joined his Uncle Stanley in starting the Lillian C. Morris Endowed Scholarship. And after learning about the spirit of generosity that his grandmother embodied, it is easy to see why. Allen shared the story behind this scholarship with us, saying, 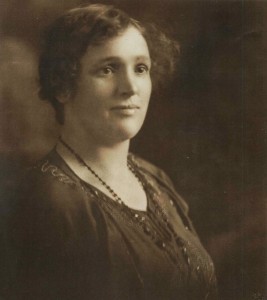 “Lillian C. Anderson, born in 1884 in Sweden, one of 7 girls, moved to the USA with her family as a child, lived in the Midwest, Alaska and finally in Tacoma.

She married Worthy J. Morris in 1906, gave birth to Florence, Charles, Stanley and Donald. Ceria 1920 the family moved from Purdy, WA to near PLU’s campus. Charles, age 12, was charged to walk Betsy the milk cow the roughly 24 mile route. The family overnighted on Center Street in Tacoma on their two day journey. The rest of the family traveled by a car pulling a trailer.

The boys frequented Pacific Lutheran College, and played basketball and other activities in the school’s gymnasium. The school had an open-door unwritten policy of never turning local kids away, lest the gym was used by the school. Stanley never forgot that expression of “giving” and inaugurated the Lillian C. Morris Fund.

So why the name Lillian C. Morris? The Morris’ often lived near railroad tracks frequented by “hobos,” looking for a handout. Lillian never refused on in need. Stanley often praised Lillian’s charitable acts in my (grandson Allen) company, a quality Uncle Stanley inherited. She was known as an “Angel from Heaven”. Lillian’s sons and their wives never once recall when Lillian was ever angry, complained, spoke an evil word or talked negatively against anyone or anything. Her children were never spanked and all grew to be successful business men, without a college education. Lillian could communicate with young and old alike, and after a conversation with her you had a friend forever. For these reasons the Fund is so named.

As a footnote, the family always provided for the wellbeing of Worthy and Lillian and always maintained the family unity of support. The Morris’ were truly bonded.

Stanley was a visionary. He specified that the Fund support environmental studies, mathematics and the sciences. As a political conservative, he recognized the need to conserve and also advance in knowledge for the preservation of the earth and humanity. His foundation came from very humble beginnings, graduating from high school into the Great Depression, serving in WWII, and was part of the “Greatest Generation”. Thus he shared his success with those who wish to better themselves, their fellow man and the world. What better way than to do so in a Judo Christian institution which promotes the moral and ethical values so needed in society today.

Let me leave you with a question. Who will take the place of Stanley?”