The Senufo are an ethnic group who live in Côte d’Ivoire, previously called the Ivory Coast. The Senufo consist of numerous diverse subgroups, and recognize three secret societies – the Poro, Sandogo, and Wambele. These societies serve the purpose of instructing young men and women how to be good community members, honor their elders and ancestors, and respect supernatural forces. Art is an important part of the Senufo culture and it is tightly tied in with their religion and beliefs. The one that concerns us is the Poro society which makes specialized masks that are used to connect with the gods, ancestors, and bush spirits. The Kponyungo, also known as the “funeral head mask” or “Firespitter,” is the most well-known Senufo mask. The name Kponyungo is derived from the words “kpoo” and “nyungo”, which translates to “the head of the deceased one”. It is a carved wooden helmet mask, which means it is worn over the whole head, and is used in the funerals of the Senufo people. 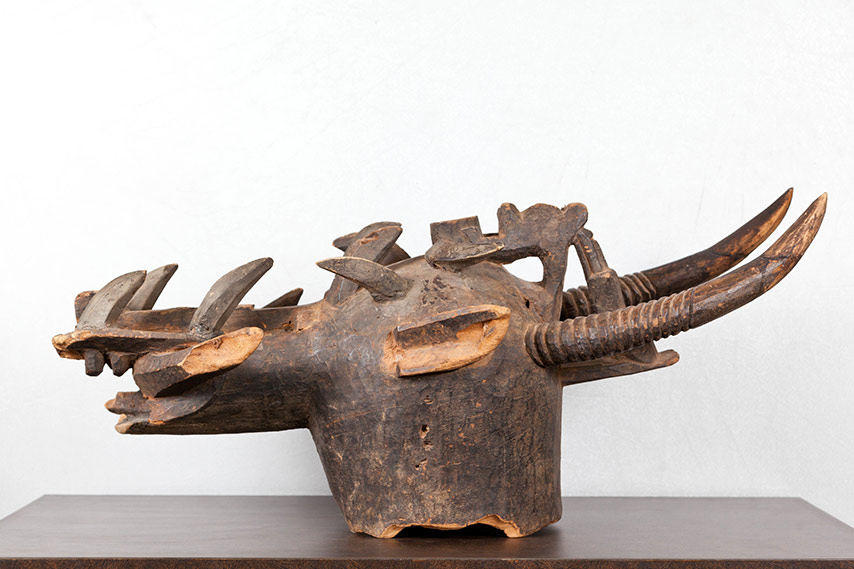 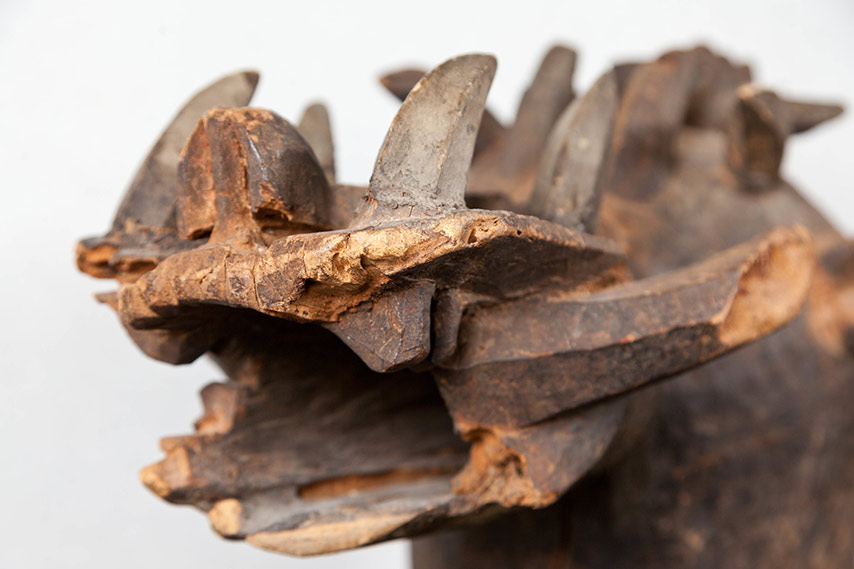 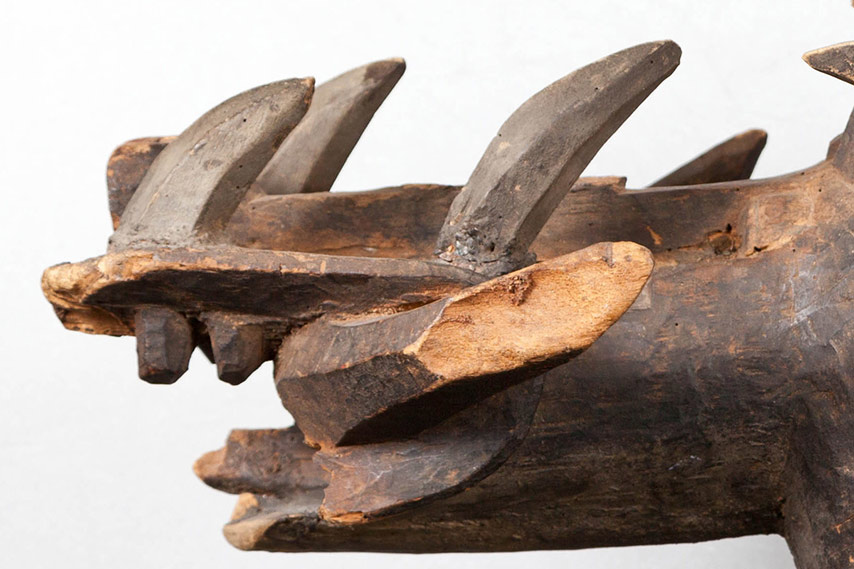 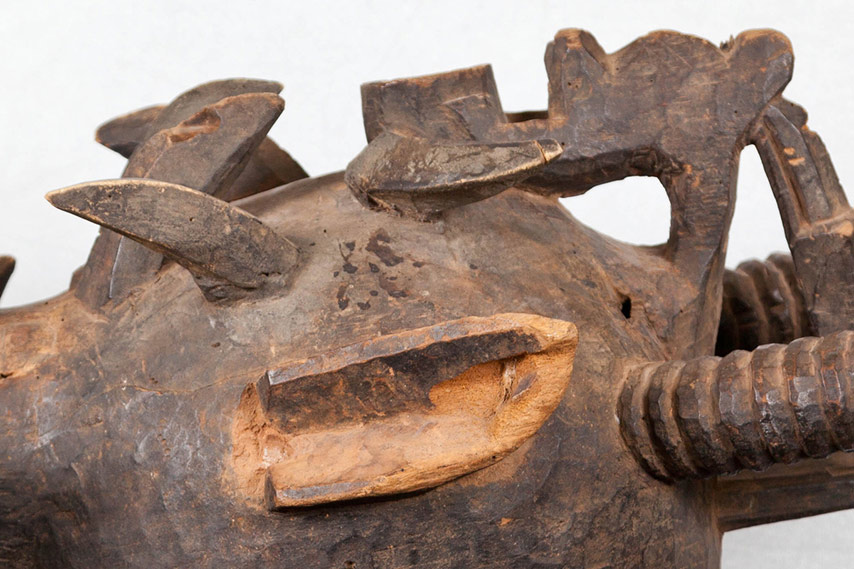 Members of the Poro society, a “secret men’s society,” wear it during the funeral ceremonies of their deceased members to honor them as well as well as ward off evil spirits. Each Poro organization present at the funeral is represented by a member wearing the Kponyungo mask and beating on hand drums by the side of the carved wooden bed that is used in the Senufo funeral ritual. The funeral lasts roughly three days, and according to Lamp consists of a procession of masqueraders and initiated members from the Poro society. It starts at the society’s sacred grove of trees at the edge of the village and the route leads them to the shelter of the society in the village. Here those who are frail can sit down if they are no longer able to continue to walk in the long line of the Poro members. Once at the shelter, the masqueraders beat their drums. Afterwards they head to the home of the deceased, where the corpse has been placed in its house, wrapped in cloth, and guarded by some of the close relatives who ward off flies. The masqueraders stand still in front of the door and beat on their drums. After one or two days have passed the masqueraders come back to the deceased home and go into the courtyard where the corpse has been brought outside and cloth have been sewn around it. Now, apart from wearing the mask over the face, the dancer “wears a costume that consists of a one-piece suit dyed deep red with painted figurative and geometric patterns” (Art and Life in Africa: Senufo). Since this is a helmet mask which covers the entire head there is no need to physically attach it to the costume.

The appearance of a Kponyungo mask is a mixture of several animals. According to Goldwater, the mask “can include iconographic details taken from the buffalo, the warthog, the crocodile and the antelope, in its larger parts, plus small representations of a chameleon and a bird, even sometimes a snake” (17). The Kponyungo in the PLU collection seems to be a possible mixture of antelope with its long curved horns at the top of its head, possibly a hyena or another animal with pointed ears, and a crocodile with its long jaw and mouth full of sharp teeth.  It may also include a warthog or wild boar, whose flat pointed nose at the end of its face, along with several sets of tusks both protrude from the mouth and on top of its long jaw, and below the eyes at the base of its face. Most masks found in other collections only have two or three sets of tusks. However, as Lamp notes, each “Firespitter” mask is individual to the Poro society that made it. He says that even when a “Firespitter” mask is replaced it keeps the same looks “so it is recognizable for the members of the society and maintains the local identity of the particular Poro society” (200-201). At the very top of the mask, between the antelope horns, additional features can be noted. One looks like a small cup, the second a small creature with a long tail, and the third some sort of a bird. The bird is most likely a hornbill since that is the type of bird that is usually put on top of the Kponyungo mask. Unfortunately the state of wear on the small figure with a long tail is so great that it is difficult to tell if this is a chameleon or a snake.

In fact, there is extensive physical damage all over this mask in the form of cracks, holes that are possibly the result of insect damage, and areas that have either been worn down or worn away, perhaps due to wear or environmental weathering. Another sign of wear that can be seen on this Kponyungo is inside the mouth of the mask. Where the rest of the mask is a light tan brown color, the inside of the mouth is black, like it has been burnt and charred by a fire. This could well be the result of the “Firespitting” that the mask is famous for. Goldwater describes this part of the ceremony by stating that “from time to time the mask wearer shouted formulas in a high-pitched tone, and proceeded to blow out a small blast of glowing sparks and little flames. This was produced by means of grass properly cut in tiny pieces and smeared with a sort of resin also used in torches. The mixture was ignited from inside the jaws of the mask by the bearer blowing upon a small but heavily ash-coated piece of smouldering wood from the marrow core of a tree” (18).
There are multiple interpretations of what the meaning of the Kponyungo mask’s appearance and purpose is. Some say it is to inspire fear in the viewers of the ceremony, while others say it is to protect the soul of the deceased by scaring away evil spirits and soul eaters. Because the mask is a mixture of several animals that create a creature that would never actually be found in nature, Goldwater states that what the masks physical form depicts “is very different from what (it) finally represent(s)”, and in this funeral ceremony “these are demons rather than animals; and while they are in use at least, they fuse with the demon, or his spirit with them, and temporarily become his embodiment” (17).