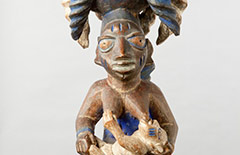 This wooden sculpture depicts a kneeling mother with a nursing child in her arms. 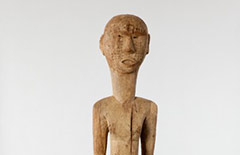 This is a Bongo grave post with a male figure, which is carved out of a single piece of wood. 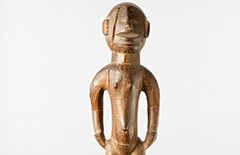 The figure has scarification on it, in a style that is found in the Mossi society. 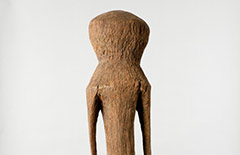 This Moba figure in an abstract human form is carved from a single piece of wood.

Most often carved from wood, but historically from clay and metal alloys also, figures can be representations of human beings or spirits. As human figures, these can be individuals such as a king or queen, soldier or horseman, or multiple  figures, including male and female couples, or a woman with a child or children. It all depends on the purpose for which the figure was made, and this can be assumed to be central to the cultural ideals and values of the people who utilize it.

As with masks, figures can be owned by individuals, groups of people or an entire community. Often about ensuring good fortune, happiness and harmonious relationships, figures are also associated with appeasing the spirits said to inhabit or communicate through them. Thus they relate to spirituality, the solving of problems and restoring harmony, whether this is within or between individuals, communities or a region. Therefore, it is not unusual for offerings to be presented to them.

Typically kept in a place considered a sacred space (think church, mosque or synagogue), a figure or sets of figures in the form of a spirit object or grave post becomes a shrine to which individuals or community members are drawn to seek advice, to solve their problems, to ensure the happiness of the ancestors, or to placate the spirits that fill the world.  At a time when scientific knowledge was limited, Africans, as so many other peoples did before them, relied upon different sorts of beings and objects to explain the environment and world in which they lived. Masquerades often served these same purposes.

Life in Western societies is most often seen as linear in form—birth to childhood and adolescence and then adulthood to old age and death. In many traditional African societies, life is more helpfully seen as having a circular form—birth to childhood to adolescence to adult to ancestor, where ancestors continue to play a vital and active role in the life of the living, especially the children and grandchildren. As such, a family needs to maintain the link to the spiritual world of its ancestors by actively and regularly memorializing and honoring them. Figures in personal, family or community shrines serve this purpose.

Once again, it is worth reminding ourselves that figures, including all those in the PLU Collection, are like masks; they can be admired for the skill in their making or the attractiveness in their outward appearance, in which case seeing the object on a stand or pedestal or in photographs is fine. But only by reading and learning more can a figure be understood for what it expresses and communicates to the people who made it, and the context in which it is used, whether religious, social, educational, political or economic.