If you think anthropology is limited to the study of stones and old bones, think again!

If you think anthropology is limited to the study of stones and old bones, think again!

J-Term Makah Culture Class Offered by the Dept. of Anthropology

Anthropology: The Study of Humanity

Regardless of the specific area being studied, the essence of anthropology is in the observation of different peoples and cultures — studying them as they really are instead of how you think they should or should not behave.  It is only through this detailed study of all people that we gain the full picture of what it really is to be human.

Anthropology tries to bring the world’s peoples into human focus. Anthropologists do not come up with a theory and see if people live up to it. They go and live with people and see what they do. 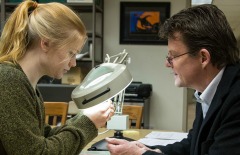 “This is the sort of opportunity that can only come from having relationships with your professors,” said Emma Holm ’17, who worked this year on the project. “I really wanted to take advantage of undergraduate opportunities.”

Learn more about the Makah culture and Neah Bay

Read about what our alumni are doing