Elements of the Ceremony

The Commencement ceremony is a celebration of the Pacific Lutheran University community and all it represents. It opens with the setting of the stage, including banners and symbols representing aspects of the University. The Color Guard of the Lute Battalion of the Army Reserve Officers’ Training Corps initiates the setting of the stage: The flags of the United States and the State of Washington represent the people the ROTC guards are sworn to protect, and the guards on either side of the flags carry ceremonial rifles to symbolize that protection.

As a university sponsored by the Evangelical Lutheran Church in America, with a focus on International Education, PLU educates students to protect and serve the world through many avenues. Thus, when the Academic Procession begins, the University Marshal carries the PLU mace, representing the academic authority and independence of the University, followed by the flags of the nations representing our graduating International Students.

The whole PLU community, in its rich diversity, participates in this celebration. As different groups of the PLU community process into the arena, ceremonial banners are also posted, completing the stage and getting everything ready for the ceremony.

Academic dress has its origins in clerical dress of the medieval church. PLU adheres to the national standards of academic dress established in 1895 and maintained by the American Council on Education.

The significance of the apparel is indicated especially by the sleeves and hoods. The master’s gown has long, closed sleeves, and the doctor’s gown has bell-shaped sleeves and velvet trimmings.

The master’s hood is 3 feet in length and the doctor’s, 4 feet. Hoods are lined with the colors of the institution from which the individual received his or her degree. The colored velvet border of the hood, which is 3 inches and 5 inches wide for the master’s and doctor’s degrees, respectively, indicates the faculty or field to which the degree pertains.

The lining of the Pacific Lutheran University hood carries the black and gold institutional colors. 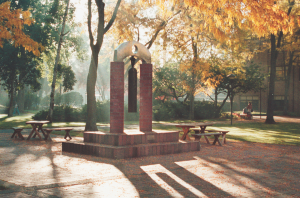 The Centennial Bell is located at the heart of the Pacific Lutheran University campus, across from the Karen Hille Phillips Center for the Performing Arts on the red-brick quadrangle known colloquially as Red Square and officially as Centennial Plaza.

Each year, on the first day of classes, the bell is rung to announce the arrival on campus of the new class and the beginning of the Convocation ceremony opening the new academic year. The ceremonial ringing of a replica of the Centennial Bell is repeated at the time of Commencement to announce the graduation of the class.

The Centennial Bell was dedicated on May 27, 1990, to commemorate the 100th anniversary of Pacific Lutheran University. It was a gift from the 11th President, Dr. William O. Rieke, and his wife, Joanne Rieke. The Centennial Bell and its replica were created by sculptor Tom Torrens, former PLU Artist in Residence. 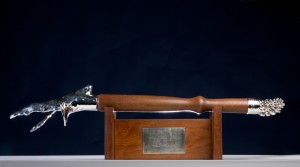 For centuries in academic and ecclesiastical processionals, a mace has been carried by the marshal to symbolize the official opening and closing of a formal event.

The head of the mace has a descending dove, representative of the harmonious presence of the Holy Spirit within the learning community. At the base of the walnut staff is a silver pine cone, made from a casting of a cone from the PLU campus.

The cradle bears a plaque with the following inscription from Proverbs 4:7: “Wisdom is the principal thing: therefore, get wisdom. Yea, with all thy getting get understanding.”

Designed and created by Tom Torrens, former PLU Artist in Residence, the mace was a gift of former President and Mrs. William O. Rieke and family, presented at Commencement 1976.

Also known as the Luther Seal, this is the most recognized symbol of Lutheranism around the world. Martin Luther personally designed this coat of arms and used it from 1520 until his death in 1546. The banner precedes the University Pastors and symbolizes the University’s Lutheran affiliation.

This seal, with an image of Mount Rainier and the motto “Build for Character,” was Pacific Lutheran College’s first official seal. The 1942 catalog read: “The motto… expresses succinctly the aim of the school.” The banner precedes the Chair and other leaders of the PLU faculty.

This seal was adopted when the institution resumed the name and status of a university in 1960; it appears on official university documents from 1960 to 2012. The design incorporates elements that symbolize the University’s heritage and mission, including a “Chi Rho,” an abbreviation of the first two letters of “Christ” in Greek; the book of knowledge; the lamp of learning; and an evergreen tree symbolizing the Pacific Northwest. The banner precedes the President’s Council, made up of the Provost and the Vice Presidents of the University.

The Crowned Lion of Norway

The rampant crowned lion bearing a golden axe with a silver blade on a red background is the central element of the coat of arms of Norway. Dating from the 13th century, it is among the oldest state coats of arms remaining in contemporary use. The banner precedes the Chair and members of the Board of Regents and symbolizes the University’s Norwegian heritage.

This is the official seal of Pacific Lutheran University. It’s represents PLU’s historic Rose Window, located in the Ness Family Chapel at the top of the Karen Hille Philips Center for the Performing Arts. The distinctive Rose Window represents the history and tradition of the institution, speaks to its Lutheran heritage, and connects students of today with generations of alumni. The PLU Board of Regents officially adopted this seal on October 14, 2012, replacing one that had been used since 1960. The banner precedes the President and symbolizes the authority of the University.