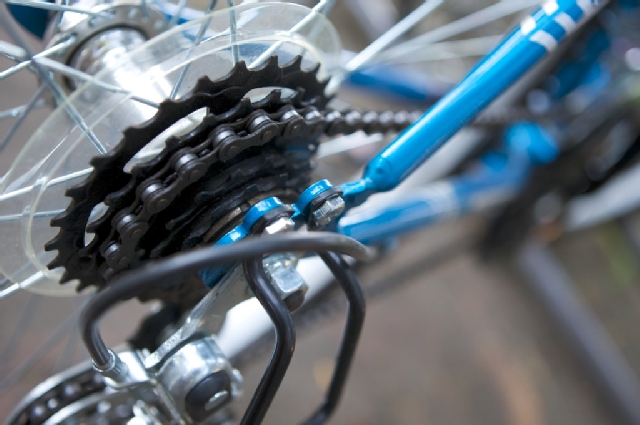 Student rounds up a few abandoned bikes and voila, a co-op.

It is not just PLU employees who are seeking better, more sustainable and less expensive ways of getting to and from campus. Students are thinking about this too. And one student, with a few abandoned bikes, is doing something about it.

Senior Eric Pfaff will open PLU’s first bike co-op this fall, an opportunity for students to run errands, commute to work or school, or otherwise get around without having to fill up a gas tank. And, it’s healthy.

The program was kick-started with the donation of nine bicycles that had been sitting unused in Harstad Hall’s basement for more than two years – presumably abandoned by former students. Pfaff and his team started fixing up the bicycles for use by the co-op. He’s still working out the fee structure and some of the liability issues, but Pfaff expects most of the bikes will be rented out on a per-semester basis, and at a fee of no more than $50 a semester. The goal, after all, is to get people bicycling – not make money.

The co-op will be more than just rentals. “The ultimate goal of the co-op is to develop more of a bicycle culture on campus,” said Pfaff.

With that goal in mind, Pfaff says the co-op will offer short classes for everyone on simple bike maintenance, like repairing a flat or fixing a chain. He also plans to have accessible bike pumps available at the co-op, which will be housed in the Outdoor Rec headquarters in Lee House (at the corner of Park Ave. and 121st.). “I often hear from people who say that they have a bike, but they haven’t been riding it because they’ve had a flat for a month or two,” said Pfaff. “Now, we can provide an easy way to fix it.”

Pfaff says the idea came to him when he and a few other GREAN members visited the University of Oregon last year for a sustainability conference. They got thinking about biking, and the simple way it contributes to sustainability. Clearly, Director of Resident Programs Jeff Krengel and then – ASPLU vice president Tamara Power-Drutis were thinking the same thing. They asked Pfaff to looking into developing a bike co-op, and Pfaff earned Sustainability Fellowship last May to help him do so. Pfaff spent the summer researching options, working with natural allies Outdoor Rec and Residential Life to come up with a plan.

And now, thanks to a little forward thinking and a few abandoned bikes, Pfaff’s is doing his part to keep the university’s sustainable practices on a roll.