When Jennifer Henrichsen came to PLU, she had every intention of majoring in biology and psychology, and then moving on to medical school. Ambitious – and admirable – plans. But halfway into her sophomore year, she had something of an epiphany: Med school was more of her mom’s dream than her own. 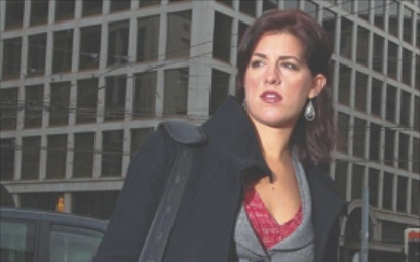 Jenn Henrichsen ’07 found a passion for world politics and journalism.

“One of PLU’s strengths is its dedication to helping students succeed in the field of global education,” said Henrichsen. “When the opportunity arose to obtain both political science and communication credit by studying and interning in Norway, I jumped at the chance.”

She was hooked. Henrichsen, who double-majored in political science and communication, traveled abroad four separate times as an undergraduate – to Germany and England, to Norway, to the Balkans, and to Switzerland.

That is where Henrichsen ’07 finds herself now, graduating in 2007 and living in Geneva, Switzerland. She’s earning a Master of Advanced Studies in International and European Security there, studying international law, terrorism and energy security, among other subjects. She also is studying press freedoms in regions of global conflict, with a focus on the increased intimidation, and sometimes assassination, of journalists. And, she’s also working as a freelance journalist at the United Nations’ European headquarters.

It is a pretty good post-graduation gig.

And here’s the best part: She’s doing it on the U.S. and Swiss government’s dime, as part of one of the world’s most prestigious global study programs – the Fulbright U.S. Student Program.

It is the largest U.S. international exchange program, and one of the most selective. It sends about 1,450 students a year to more than 155 countries, with a mandate to embark on joint ventures of importance to the general welfare of the world’s inhabitants.

It should be no surprise that students like Henrichsen see the chance to continue their studies in places like Geneva as a natural progression of their studies. In fact, PLU’s

Wang Center for International Programs provided the basis for her winning Fulbright proposal when it gave her – along with her professor and mentor, Joanne Lisosky – a research grant to study human rights at the U.N. in Geneva.

That PLU is extremely successful at placing graduates in the Fulbright program should also be no surprise. In 2007, PLU was named by the Chronicle of Higher Education as one of the top four masters-level institutions in the United States, in terms of the number of students participating in the Fulbright U.S. Student Fellowship program. Since 1975, PLU has had 79 Fulbright recipients.

So, why is PLU so good at getting Fulbright scholarships?

“That PLU ranked so high testifies not only to the quality of PLU, but to the quality of a liberal arts education,” said Troy Storfjell, assistant professor of languages and literatures, and for several years, the university’s Fulbright program adviser. “The Fulbright Fellowship is an ideal match with the global focus of this university,” he added.

It is not that PLU focuses on Fulbrights. They are simply a product of PLU’s dedicated focus on global education – the honors just naturally follow.

As she tells the story, Henrichsen didn’t truly fall into the topic of press protection – the basis of her Fulbright proposal – until she Googled a report by the Press emblem Campaign. The group’s report documented press deaths and called for strengthened international humanitarian law provisions.

“I e-mailed one of the authors asking for the report, and found that the author was a journalist who worked at the U.N., and whose office was literally a five-minute walk from my computer desk in the library,” she recalled.

“I walked to his office, received the report, set up an interview, and before I knew it, I had my research topic for the Wang Center grant.”

For the time being, Henrichsen will continue to immerse herself in her masters program, while continuing to work on her French and German language skills, as well. To do that in Geneva invigorates her.

“When I’m in a press conference [at the U.N.] I feel like the world is literally at my fingertips,” she said. “That kind of information is exhilarating. I find it is impossible to be apathetic when I have the awesome opportunity to be a first witness to history.”

For most PLU students, and certainly for Henrichsen, so many meaningful international experiences start in a small office at the northwest corner of campus – The

Wang Center for International Programs. Founded by alumnus Peter Wang ’60 and his wife, Grace, the two were keenly interested in finding ways to prepare students for lives of leadership and service in an interconnected world. So concerned, they funded the unique center to the tune of $4 million.

PLU has always focused on international study, but the Wang Center changed the game. It plays a large role in the fact that more than 40 percent of PLU students study abroad at some point in their career at PLU. The national average is 3 percent.

The center has been essential in creating opportunities for students like Henrichsen who have passion for understanding the world, firsthand.

“I believe it was a continuous stream of support from PLU professors and seized opportunities that enabled me to follow this path,” Henrichsen said. “A turning point for me was my first experience abroad on PLU’s J-Term. That program was the catalyst for all subsequent experiences – from Norway to the Balkans to the U.N. in Geneva.”

PLU has this effect on a lot of students.

J-Term is shorthand for January Term, PLU’s one-month term squeezed between the larger fall and spring semesters. Many PLU students consider it the perfect time to get off campus and see the world.

“I knew when I decided to attend PLU five years ago, that I would study abroad. It was one of the elements of why I chose PLU over other colleges,” she recalled.

“That said, I could never have predicted that five years from that decision, I would be working as a freelance journalist at the U.N., beginning a rigorous masters program on a Fulbright grant.”

What in the world will she do next? Good question.

One thing is clear: Henrichsen will be prepared to embrace it the moment she gets there.