Whenever admissions counselors were preparing to visit Brett Monson while he was in high school, they’d look at his application and then, inevitably, do a double take. 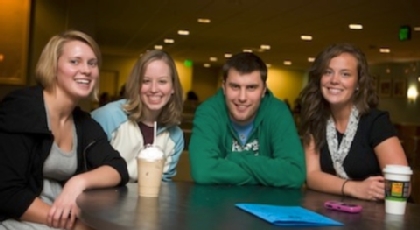 The five lines under “Who else do you know at PLU” were filled with his parents, his aunts, his uncles and his grandparents. He’d finally start scribbling on the back.

“Yeah, I have pretty broad roots at PLU,” junior Brett said while discussing how six students – cousins, brothers and sisters of the Olson-Monson-Gedde-clan – all came to be at PLU at the same time.

The first to arrive was Aaron Olson, a business major, who graduated last year. He was followed by his cousin Michael Monson (graduated), who was then followed by Michael’s cousin, Brett Monson (senior). Then there are Aaron’s sister, Kari Olson (junior), cousin Linnea Olson (sophomore), and another cousin, Rondi Gedde (senior).

These cousins are all connected by two brothers, the grandparents, who had strong connections to PLU and Lutheran universities. They were Dave Olson, former director of athletics (’68-’96) and his brother Luther Olson, whose son, Steve Olson is now vice president of Development and University Relations at PLU, and father of Aaron and Kari. Steve Olson is also the uncle of Linnea.

The Monson-Gedde side of the clan can be traced from Dave Olson’s daughters, Julie ’85 and Jana Olson ’82. Julie is the mother of Michael Monson, and an aunt to Brett. Rondi is Jana Olson’s daughter. Got all this?

If you don’t, that’s fine, the cousins say. They are accustomed to the confusion as they explain the lineage over a series of interviews.

Despite the family connections to PLU, Aaron, 21, said that coming to PLU wasn’t a slam dunk. He grew up in Washington state, but moved to Minnesota. Ultimately, he wanted to return to the Northwest. So he came by himself to PLU four years ago and quickly grew to love the campus. Although there seems to be an entire gaggle of cousins around the university, everyone reported that they don’t see each other around every turn.

In fact, it came as a surprise when Aaron arrived for a communications class in 2008, and found out that Michael and Rondi were taking the same class.

Brett ’10 said he remembers having childhood memories of coming to campus with his dad, Eric Monson ’83, to watch football games. His mom, Lisa, graduated from PLU in 1986.

“I have kind of a history here,” he said. “My dad would come down to see Frosty Westering, so I remember watching many of the games from the sidelines. They were so awesome. And to be actually playing football for the university now is amazing.”

A biology major with hopes of becoming an orthopedic surgeon, Brett, 20, said he doesn’t run into his cousins much, unless it’s a chance meeting in the UC while grabbing lunch, as happened last fall during this interview, when Aaron and Kari bumped into him.

“If anything, I’d like to see more of them,” he said. Linnea Olson said she was mulling over going to PLU or Concordia College in Minnesota, her home state. She finally decided to become a Lute, to “spread my wings a little” and get away from home. It didn’t hurt, however, knowing she’d know someone once she arrived on campus.

Rondi needed more convincing. She at first wasn’t going to go anywhere near PLU, since “it was the family school.” So she first went to Western Washington University in March.

When she realized that Michael was transferring to PLU from Concordia, she made up her mind to transfer to PLU too.

“Really, family plays a big part of everything with us,” she said. “There is support and contacts (at PLU).” Rondi’s living at home in Olympia now to save some money, but while on campus, she often drops by a house rented by Michael, which happens to be right across the street from a house Aaron is renting. So it provides an informal hub for the clan.

Michael is finishing up a business degree and is a self avowed hockey fanatic. He first decided to stay in the Midwest, at Concordia College. But when the thermometer hit 67 below one winter, he decided to transfer west to warmer climes.

Kari said she had always wanted to come to PLU, and is glad she made that choice. “Some people think it’s weird,” she laughed. “But I love the shared experience.