What’s next? Is it awesome?

What would be awesome?

It would be easy to say that, over his career, PLU graduate Peter Parsons has found himself in the right place at the right time.

He was on the Xbox development team when there were fewer than a dozen people working on the project. He was product manager for some of the early groundbreaking video games like Flight Simulator and Age of Empires. He had a hand in the “Where the Hell is Matt?” video going viral.

Oh, and by the way, he also led the development team of Halo 2 and Halo 3 – also known as The Greatest Video Games in the World. 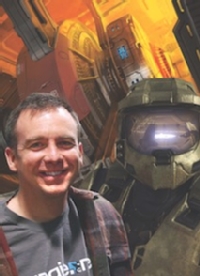 What makes Peter Parsons, the former executive producer of Halo 2 and 3, tick? One thing, and one thing only.

To say that Pete Parsons has been in the right place wouldn’t quite be accurate. He’s been making it the right place. It has always been an essential part of his core philosophy.

“I always ask myself ‘What would be totally awesome to do? Then I should go do that,’” he said.

What was true in his career, was also true for his education.

Parsons originally entered Washington State University. But as he started to figure out what he wanted to do after college, transferring to PLU made a lot of sense. “I liked what I saw at PLU,” he recalled. “I liked the smaller environment and the smaller class sizes. It felt good to me. Plus, I thought they had a great business program.”

Also factoring into the equation: a move to PLU would allow him to be closer to the businesses that would likely employ him. That proved to be true.

Parsons would graduate PLU with a degree in finance, taking a position at Weider Nutrition, the maker of sports drinks and nutrition bars. Health and fitness was one of his two passions (the other being gaming and software). Parsons worked his way up the ladder, rising to VP of marketing and product development. By any measure, a good gig.

Parsons laughed at the question. “I’ve always done the things I wanted to do. It was my passion, and it was time to follow that passion. I didn’t care what it took or what I would get paid. I probably would have taken a job for free.” Parson paused. “Which, come to think of it, at first, I was getting paid pretty close to that.” (Spoiler alert: Financially, it worked out O.K. for Parsons.)

He landed at Microsoft, working as a product manager on Monster Truck Madness II. Then came the more famous titles, and then the opportunity to work on the then secret Xbox. When Parsons was asked to work on Microsoft’s acquisition of Bungie Studios – creator of the Halo series – his career officially could be considered headed for the stratosphere.

We all know how Halo worked out. As studio manager of Bungie Studios, he presided over the creation of the most critically acclaimed and commercially successful video game series of all time, generating sales in excess of $1 billion. And it wasn’t just video games – the franchise included best-selling novels, soundtracks and so on.

Then, after completing pre-production of Halo 3 and developing a partnership between Microsoft and Peter Jackson, the Academy Award-winning director of the Lord of the Rings films, Parsons did what many would consider unthinkable.

For Parsons, this decision goes back to the same question he has always asked of himself: What would be totally awesome to do?

Parsons likes to work with college-age students and help them set priorities as they consider their future. He will often come to PLU and other places to discuss how his choices have shaped his career. Time and again, he asks those he is speaking to ask themselves that same fundamental question.

“I will talk to students who have planned-out a certain career track – they will say, ‘I want to be at so-and-so position in two years, and VP in five.’ That focus is great,” said Parsons. “But I always ask them, ‘Is that the thing you care about? Is that what would be totally awesome to do?’”

At this stage of his life, starting his own business is what would be totally awesome. He started Fyreball, which became Meteor Solutions, a platform that allows e-marketers to measure and track Web-based creative campaigns through the single-most powerful (and least understood) marketing tool there is: word of mouth.

Nobody has been able to do it yet. Parsons thinks he is onto something – and companies like Microsoft, Disney, Sony, AT&T Wireless, some of his first clients, seem to think so too. One of Parsons first proof-of-concepts was the “Where the Hell is Matt?” video, which he says enabled Meteor Technologies to track how and why bad-dancing Matt’s video was passed through cyberspace.

It remains to be seen how Parsons’ latest venture will re-shape how companies advertise on the Web. Time will tell. One thing he does know, even with the hardships and the sleepless nights that come with creating a Web startup, the process has been exactly what he hoped it would be: Awesome.