When China Rules the World

What will the world look like when China is calling the shots?

Even by the most conservative estimates, China will overtake the United States as the world’s largest economy by 2027 and will climb to the position of world economic leader by 2050. 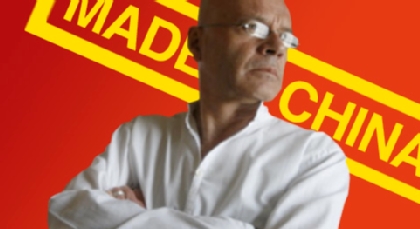 Journalist Martin Jacques spoke on how the world will change with China as a dominant power
Full repercussions of China’s rise-for itself and the rest of the globe-have been little explained or understood until journalist -essayist Martin Jacques (pronounced “Jakes”) decided to take a look at what the world might look like under the influence of the Middle Kingdom.

“I think we in the West have always believed that as China modernized, that it would Westernize..the would become clones of us,” said Jacques in an interview from his London home.

On May 11 at Chris Knutzen Hall in the University Center, Jacques, an award-winning journalist, will talk about his far-reaching and original investigation which culminated in the book – When China Rules the World: The End of the Western World and the Rise of the Middle Kingdom (The Penguin Press; November  2009). In his talk, Jacques will offer provocative answers to some of the most pressing questions about China’s growing place on the world stage.

“I remember being very excited (when I read his book) because this was a set a questions that I’d been waiting for about 10 years for someone to ask,” said Gregory Youtz,  music professor at PLU and the director of PLU’s China Study Abroad Program.

“I think one of the biggest questions is that as China develops and modernizes, does it become more Western,” Youtz said. “That’s always been the assumption.”

Jacques argues in his book and in the interview that, in fact, China will seek to reshape the world in its own image. The strong sense of superiority rooted in China’s history promises to resurface in 21st century China and in the process strengthen and further unify the country, Jacques concludes in his book.

“It’s not that China hasn’t learned a hell of a lot from the West. It has,” Jacques said. ” But it will not be like the West.”

“He talks about how the Chinese have their own sense of superiority, just as the U.S. has its own sense that we’re God’s people, and the British before us,”  said Youtz, who also organized Jacques’ lectures in the Seattle area.

That’s uncertain, Youtz noted. Generally, China has been more interested in making key trade and business alliances with other countries, and ignores what might be happening in a humanitarian or ecological sense within that country.

“They have a very strict policy of non interference in other countries’ affairs in that way,” Youtz noted.

China’s currency may eventually become the standard by which all other currencies are measured, Jacques noted. And the country will, and already has begun to influence the G20, which is fast outstripping the power of the G7, traditionally the economies and governments of Europe and the U.S.

Several critics of Jacques’ work and predictions point out that they doubt China will emerge as the world leader because its government is too corrupt and its workforce and leaders are unimaginative. Other note that Jacques main sources for the book seem to be Western financial experts or urbane Chinese, not the hundreds of millions of the underclass workers who live in poverty.

However, Jacques actually seemed to like the debate brought up by the book’s critics and noted that many of them use his predictions to debate the topic of China’s influence rather than dismiss his work entirely.

Yet for pure clout, based on its populous, it’s hard to argue against some of Jacques’s views. This Asian giant with a billion-plus population-four times the population of the United States-will likely resist globalization as we know it and that, Jacques argues, will have powerful ramifications for the rest of the world and the U.S. in particular.

As China is already emerging as the new center of the East Asian economy (eclipsing, among others, Japan), the role of economic and cultural relevance will in our lifetimes begin to pass from Manhattan and Paris to cities like Beijing and Shanghai, the book states.  Jacques contends that it is the American relationship with and attitude toward China that will determine whether the twenty-first century will be relatively peaceful or fraught with tension and instability.

“America seems relatively unaware that it’s in a relative decline,” Jacques said. “And I think realizing this, as it was for the British, will be painful.”

Jacques is a visiting senior fellow at the London School of Economics, IDEAS, a center for the study of international affairs, diplomacy and grand strategy, and a visiting research fellow at the LSE’s Asia Research Centre. He is a columnist for The Guardian and the New Statesman.

An award-winning journalist, in 1988 he became a columnist and essayist for the Sunday Times, a relationship which continued until 1994. In 1999-2001, he was also a columnist for The Times and in 1996-98 for the Observer and since 2002 for the Guardian and more recently the New Statesman.

In addition he has written extensively for many newspapers and magazines in the UK and elsewhere including: Financial Times, The Economist, Daily Telegraph and The Independent.