Junior Julia Stockton is putting her spin on a longtime theater tradition this month, when Pacific Lutheran University hosts the annual student production “Night of Musical Theatre” from Oct. 28 to 30.

“The way it has grown in the past has been really, really phenomenal,” Stockton said. 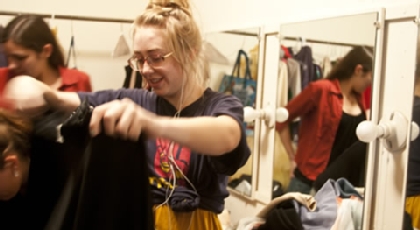 “NOMT” included numbers of “Next to Normal,” the Broadway hit that stars PLU alum Louis Hobson ’00.

“It’s evolved into something that the campus is known for.”

Stockton said NOMT started as an underground production, and no real process was instituted to plan the event. Currently, NOMT is a widely-attended event that attracts a large turnout each year.

NOMT is a showcase of musical numbers from a variety of shows. Each year is different, and the musical numbers are chosen and assigned by the current student director. Stockton is directing this year’s NOMT as part of her Capstone project.

“The logistics of it has been very difficult,” she said. “We faced unique challenges.”

Last year, eight seniors graduated leaving many open spots on the cast to fill. However, Stockton said this opened up a lot of opportunities for underclassmen to get involved.

“Half of those who auditioned and in the cast are first-years,” she said.

Stockton said this production is unique because it allows for a yearly showcase of musical theater, no matter what the main stage productions are in a given year.

“NOMT has a different aspect of theater that we don’t see every year,” Stockton said.

Senior Bryan Stenson appreciates the opportunity to do something different each year.

Stenson is a vocal performance major, and knew nothing about NOMT when he first arrived at PLU. After deciding to audition on a whim, Stenson is now participating in NOMT for the fourth year in a row.

“One the most enjoyable things about NOMT is that it’s a way to sing musical theater with a bunch of great people,” he said.

Another unique thing about NOMT, Stenson said, is that students can perform more modern musical numbers because it is a musical review. Audience members will hear newer and older musical numbers, making the compilation more diverse.

As part of the musical compilation, Stenson is performing in “Catch me I’m Falling” and “Light,” two numbers from the award-winning production “Next to Normal.” The play was featured on Broadway earlier this year and featured a former PLU graduate, Louis Hobson ‘00.

Approximately 30 people are participating in this year’s NOMT, both on the cast and production team. Stenson said about 20 musical numbers will be performed.  The theme is “Louder Than Words” and the show will featured an incorporated plot with four main characters and numerous side characters.

“Every year NOMT is different,” Stenson said. “It’s more fun this way because I get to play multiple characters.”

With a completely student-run production and a cast of very involved students, time management is a challenge. Stenson is involved in many music activities on top of his commitment to NOMT, and many cast members share a similar story.

“Rehearsals have to be very late at night,” he said. “We sometimes lose sense of focus, but that is where the fun comes in.”