For hours Dan Case ’11 and his team study the YouTube video of White during a 96 hour Mathematical Contest in Modeling.

“We’d pause it over and over again to see how to make a model out of it,” Case said. 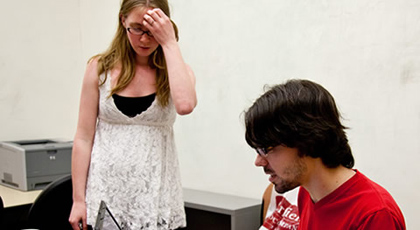 Case and 10 PLU other students, comprising of four teams, spent four days at Morken researching, testing and writing models to solve one of two problems in this year’s MCM which took place between Feb. 10 through 14. The contest tests undergraduate students ability to apply their mathematic skills to solving real-life scenarios. One was building a model to maximize vertical air in a snowboard halfpipe. The other involved line-of-sight transmission and reception of a VHF radio spectrum, with factors like the number of users and geographic interference. Thousands of students nationwide compete in the contest every year.

The students spent Thursday to Monday, figuring out what problem to address based on their team members knowledge, researching models (including looking at White on YouTube, frame by frame), testing their models and then writing 10 to 20 pages explaining their model and how they came up with it.

“It’s a lot of thinking and sitting,” said Kyle Burns ’11, whose team took on the signal processing challenge.

This was the third year Case has taken a part in the competition. Each year, students are presented with a different problem that they don’t know until the start of the competition.

“The process is pretty similar, obviously the problems are different,” he said. “What changes the most is the work dynamics. It’s just as much education as it is community building. It’s really fun.”

“I think the experience in itself is helpful in a team setting,” Case said.

Many of the students are mathematic, computer science and physics majors. Working in teams and a addressing problems outside the context of textbooks is how they’ll be using their skills after graduation, Case said.

They won’t know who won the competition until later this spring, but the experience is reward enough.

Nicole Pennington, first year, thought one of the great challenges and exciting aspects of the contest was the students had to come up with the tools they needed to build the model.

“You don’t really get all the tools,” she said. “You have to find them yourself and determine what is important.”

And there really isn’t one answer, Case said. The models the four PLU teams developed, with two each addressing one of the problems, were different in their approach and out comes.

“I expected to find a model that we exactly needed,” Burns said of the signal processing problem. “That definitely didn’t happen.”

During the research period, the students found parts of models that would work, but really had to develop their own to fit the criteria presented.

A hefty challenge was then going through notes, graphs, math and writing papers that fully explained what they did, why they did it and how they did it.

Scoring is based on about 50 percent math and the other 50 percent on the writing, said Tom Edgar, contest advisor and PLU assistant professor of mathematics.

“When it came time to write it, I found myself taking 10 to 12 pages of scrap paper and trying to figure out what I used and how I used it,” Burns said.

Explaining it is half the battle, Edgar said.