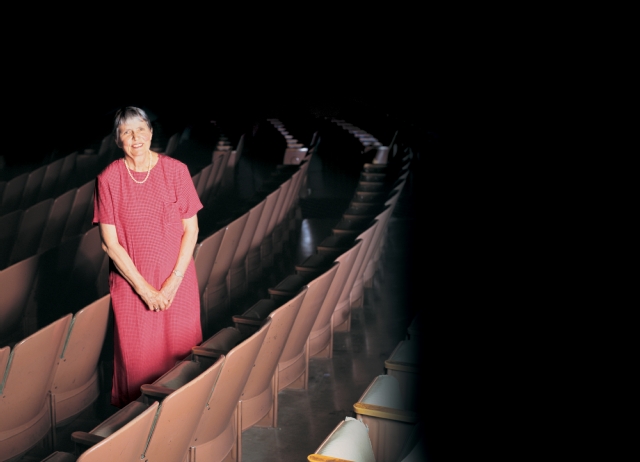 A Lifetime of Service to Others

Upon first meeting Karen Hille Phillips ’55 you probably would have found her to be nothing more than a demure, devout, single nurse of modest means – a homebody with a kindly way about her, reflective of her roots as a farm girl. And you would have been quite wrong.

Karen Phillips, who passed away in 2010l at age 78, was all of those things and much, much more.

She was modest and shy, but well known for her charming smile and distinctive laugh. Her friends say she had a keen intellect and was a voracious reader of everything from faculty authors to newspapers and periodicals. And, they say, she was just plain fun to be around.

She was a deeply religious Christian and member of her church, but very private, almost ascetic, in her expression of faith.

She was single for most of her life, but had a decades-long relationship with J.W. Phillips. They married only after retiring from long careers in medicine and health care.

She was a PLC nursing graduate, trained in hands-on care, but came to establish and manage outpatient clinics for heart, cancer, Alzheimer’s and AIDS during her 30 years at the University of Washington Medical Center.

She was raised on her family’s wheat farm in Ritzville, Wash., but later in life helped J.W. manage – and after his death managed on her own – extensive holdings in agribusiness, commercial real estate, fine art and collectibles.

As a girl she was simply dedicated to her home life, parents and school work, but later in life blossomed to become a sophisticated global traveler. She was always eager to share those experiences with students and others.

She always lived modestly, but during her lifetime gave more than $10 million to her alma mater – and her bequest to PLU may exceed an additional $10 million. Her gifts have supported scholarships, capital improvements and the endowment.

“PLU was so important to Karen,” said Loren J. Anderson, university president. “I suppose that MaryAnn and I came to personify her relationship with the university. So much so, that each of the many letters we received from her over the years ended with the note, ‘You two take care of my university.’”

Anderson said that Phillips would likely be uncomfortable with all of the attention that is now coming her way. He tells the story of standing before 500 people in a packed banquet hall to announce that PLU had received an anonymous gift of $12 million.

The audience jumped to its feet in cheers and applause, including Phillips who acted surprised as she joined in. In fact, she was the anonymous donor.

“I’m sure that Karen would rather be remembered as the quiet, humble, selfless, consistent and caring person that she was,” Anderson said.

Nursing colleague and longtime friend Sally Flaherty said, “Karen loved J.W. very, very much and, after he died, PLU became the love of her life.”

Flaherty said that Phillips’ focus on the university was an expression of how “she always cared deeply about others and thought she could make a difference in the world. I think she did.”

Her awareness of the wider world developed over time.

“Growing up, Karen was somewhat of a homebody,” said her brother, Bruce Hille ’57. “But she always knew that she would become a nurse.”

Phillips’ perspective began to change when she became close friends with J.W., who was a physician at the hospital where she worked.

“J.W. took his mother traveling the globe and Karen would go along as a companion to both of them,” Hille said. “As the years went by, the two of them, Karen and J.W., continued to travel together. They didn’t live together, but they lived as together,” he said.

Phillips was not close to her brother and his family later in life, but he was part of her wedding party in Ritzville in 1996.

“She asked me to be her matron of honor,” Hille said, laughing. “That’s right. I stood up for Karen. It was the happiest moment of her life and a wonderful occasion for both of them.”

“We were absolutely shocked when Karen got married,” said Pat Smith, one of a group of retired nursing colleagues who meet once a month for lunch.

Another member of the group, Shirley Hanson ’60 agreed, “Karen was a very private person and spent most of her life single. We were flabbergasted when she married J.W.”

They both knew that Karen had been close to J.W. over the years and that they had traveled together. “But then all of a sudden they were married! I guess he just decided it was time,” Smith said.

Phillips’ cousin, Mark Meyer, said she was very happy having a marriage partner finally. “The two of them together were fun to see. They had a good relationship. And it was clear that J.W. was very willing to pass on to her the responsibility of being the steward of the estate he had created,” he said.

“Karen was not the kind of person who ever called attention to herself, particularly regarding the size of her estate. I think she would like to be remembered for her heart for education and for the values of young people who have the ideals and the commitment to build lives,” Meyer said.

“I recall Karen speaking in just loving terms about PLU. She would talk about the young men from the college who came to pick her up and take her to board meetings,” Stevenson said. “She so enjoyed sitting with them and discussing their dreams and their aspirations. She found it wonderful to be around young people.”

One of those young men, former ASPLU president Willie Painter ’06, said Phillips would want to be remembered as a “servant leader.”

“During the various stages of her life Karen had limited financial resources and then almost unlimited resources,” Painter said. “But throughout her life, whether with time or money, she made sure that she gave of herself back to her church, her nursing profession and her university.

“Everything about Karen spoke to her service and leadership. She would be proud to be remembered in that way.”