You do not need to be an accounting major to appreciate that an increase of 3,200 percent is staggering. Yet for Paul Scott ’04, choir director for Enumclaw Public Schools grades 6-12, that percentage represents the increase of young men who are participating in a choir today compared to when he started seven years ago. 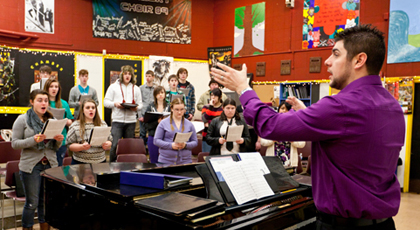 “There is so much value to what we do. Every group has it’s moments of dysfunction, but we are learning how to be better team members,” said Paul Scott ’04, choir director for Enumclaw Public Schools grades 6-12. “In most classrooms, it does not matter if someone else fails. In the music environment, everyone succeeds or everyone fails.”

At that time, there were two choirs; today there are five. Also, what started as an exploratory music middle school class today benefits 70 students who work together and hold choir performances throughout the year. He also works as the music director for the high school musical every spring.

“When I arrived at Enumclaw, we did plays but not musicals,” Scott said, “Today, we offer both.”

Scott grew up in Port Orchard as an only child of loving parents, including a dad who was in the U. S. Navy.

“It was an expectation that I would go to college, even though neither of them had,” he explained.  “My parents did an amazing job of instilling in me a core set of values, but if you don’t have a place that helps solidify who you are becoming as a young person, it can be very easy to ‘fall off track’ in college.

“PLU has expectations similar to what a parent expects.”

Scott always knew he wanted to be a music teacher and he wanted to find the best program. He looked at California, Oregon, the local public universities and some of the private colleges.

He earned his bachelor’s degree in music education in 2004 and his master’s in leadership and development in 2007. He also attended Seattle Pacific University to earn his professional certification.

“The university is thoughtful and strategic about making sure they are the right fits,” he said.

In Scott’s case, he student taught under the leadership of PLU alumnus Dan Schwartz ’93, who remains one of his mentors to this day.

While a student at PLU, Scott met and fell in love with his future wife, Elizabeth (Morlan ’05) in Choir of the West.

“I proposed to her on stage,” he said.

That was in December 2004 and they were married the following summer. They have two beautiful girls, Madelyn (3) and Avery (six months) who can “sleep through any music we happen to be playing or singing at the time,” he said. He serves as the choir director at Trinity Lutheran Church in Enumclaw and his wife is the worship director.

“There is so much value to what we do. Every group has it’s moments of dysfunction, but we are learning how to be better team members,” Scott said. “In most classrooms, it does not matter if someone else fails. In the music environment, everyone succeeds or everyone fails.”