Wang Symposium 2012: Maude Barlow talks on the importance of conserving our most precious resource 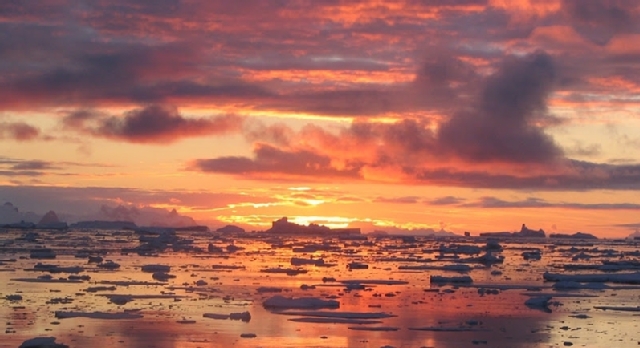 “An Antarctic Sunset” taken by PLU student Samantha Dillion in 2006 during J-Term study away in Antarctica.

Wang Symposium 2012: Water warrior fights to save our most precious resource

Maude Barlow didn’t start out interested in water. Nothing of the sort, she recalled recently from her home in Ottawa, Canada.  In the mid-80s, Barlow was working in the women’s movement and focusing  on laws that would eventually be known as the NAFTA trade agreement.

While looking over the documents at the time, Barlow noticed that water was listed as a tradable commodity. Odd, she thought. And unfair.

“I thought (water) should be free for all, and considered a resource,” she mused as she prepared her remarks as the keynote speaker for the Wang Center Symposium on Feb. 23. The two-day symposium will focus on water – both its growing scarcity and value, as well as its impact on socioeconomic trends.

“I guess since I wasn’t a lawyer or a scientist, I saw these issues with fresh eyes,” said Barlow, who has a degree in English literature. 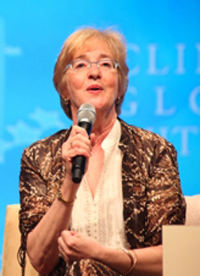 Since that epiphany, Barlow has become a leading voice on water conservation and the view that it is a resource that should be conserved and administered as a public, not private, resource.

She has authored 16 books, including “The Politics of Water”, “Blue Gold” and her most recent book “Blue Covenant” (2007, The New Press).  Barlow is the recipient of 11 honorary doctorates as well as many awards, including the 2005 Right Livelihood Award (known as the “Alternative Nobel”). In 2009, she served as senior advisor on water to the president of the United Nations General Assembly and was a leader in the campaign to have water recognized as a human right. She is currently working on her next book in the series “Blue Futures” which will look at solutions to the growing water crisis.

As for those who ask “what water crisis?” Barlow has only to point to the fact that the world is simply running out of fresh water. According to her book, Blue Covenant, 2 billion people now live without access to clean, drinkable water. The World Health Organization estimates about 80 percent of all sicknesses worldwide

can be traced back to contaminated water supplies. And the water crisis is not only affecting third world countries, or crowded areas such as China or India, she notes.

In the U.S., California has a 20 year supply of freshwater left; New Mexico has a 10 year supply; Arizona now is simply out, and has to import most of its drinking water, she notes. In all, 40 states in the U.S. are struggling with some sort of water issue and reoccurring drought. The water in the Oglala Aquifer serves much of the west-central US. It is being used eight times faster than it is being replenished, her book notes. Even with that dire prediction, last year, corporate raider T. Boone Pickens made a bid to buy the entire aquifer, but was pushed back after an unlikely coalition of farmers, native tribes and environmentalists opposed the measure.

Turning back to her first passion, social justice and the plight of women, Barlow said she discovered during her research that access to clean water can’t be separated from human rights issues and, more specifically, the issue of women’s rights.  One issue, she said, can’t be solved without addressing the other.“If a woman has to walk for miles to clean water, or any water, it affects the health of her family and their general welfare,” she said.

“Her sons or daughters may not be able to go to school because she’s out collecting water.”

In her latest book, “Blue Covenant” Marlow urges against the privatization of water resources,  such as is happening in Africa and Latin America.  If water sources aren’t under some sort of public entity – then “it really doesn’t matter if you have all the water in the world” the resource will go to the highest bidder, rather than be conserved for the public good, she stated.  For the most part, Europe has kept much of its water resources in public hands – and the attempt by Pickens aside – so has the U.S.

During the upcoming presidential elections in the U.S., those concerned with green issues need to press the candidates not only on climate change issues, but on water issues, she said. She also stressed that water should not be casually swapped across borders from one area that is water rich, such as Canada around the Great Lakes, to areas of the California – a proposal that has been considered in the past.