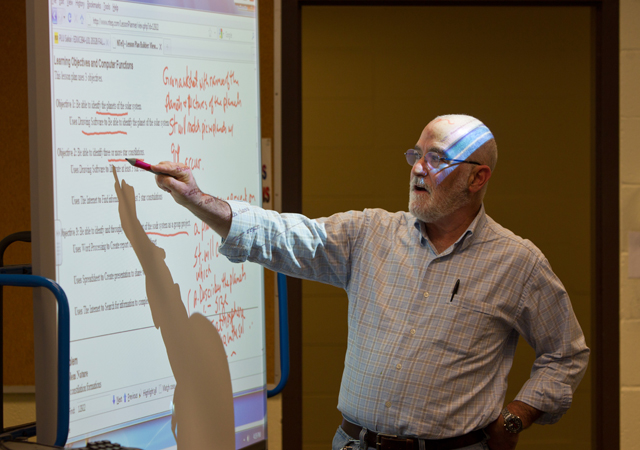 PLU Professor Lenny Reisberg uses a smart board during instruction for a course he teaches. (Photo by John Froschauer)

As the snow and ice closed campus during the end of January, the challenge of getting to class was much more than battling an early morning alarm clock.

PLU Professor Lenny Reisberg’s J-Term course was supposed to begin that week and only last a total of two weeks. If it was held in any other class it may have spelled cancellation, but the technological innovations set-up in Hauge 213 made taking part in class from anywhere with a computer and an internet connection possible.

“Even on the days where the university was basically closed, I was able to use the technology to have class,” said Reisberg, the Jolita Hylland Benson Endowed Chair in Elementary Education. “The term would have been a disaster without it.”

He live streamed a video feed online of the class to his students. It’s one of the many technologies made available in the model class – all with the goal of creating a 21st century classroom of collaboration between students and faculty. It not only provides space for student learning, but also an opportunity for faculty members to learn what they may be able to integrate in their own courses.

The class is part of a pilot program endeavor funded and programmed by a partnership between the Provost’s Office, the Instructional Development and Leadership Department of the School of Education and Movement Studies, and Information & Technology Services.

A year ago, Hauge 213 was a conventional classroom, with desks and whiteboards. Reisberg said. The three offices who partnered saw that most current classrooms don’t reflect how technology is used in the classroom today, and that includes K-12 and at the college level.

“Ten years ago computer labs at PLU would have had their own equipment,” Reisberg said. “In the past, when schools would set up a program for technology they would usually set up a lab and the lab would look like tables across a room with desktop computers and they would look like permanent pieces of equipment, but that has changed in recent years with the use of laptops and tablets and mobile devices.”

The computers and desks that held them would have been bulky and immobile, but now wireless options allow for more flexibility and many students themselves already have a laptop or mobile device for instructional use.

“We wanted to build a room that would facilitate students and faculty working together,” Reisberg said.

The design started with using flexible furniture for breaking into multiple small groups and other configurations. And those desk tops of the past are no longer part of the set-up. Instead laptops are used and the wireless network for the space meets the needs of 25 simultaneous uses.

The whiteboards have been replaced by a smart board for computer-assisted board work.

The video conferencing available, that saved the J-Term class, has saved the grades of more than students stuck with weather closures. Reisberg said, having that option, along with the immediate chat functions, provided access to his class for a student suffering medical issues. Without it, they would have had to withdraw from the course for medical reasons. This way, they were able to participate, learn and collaborate in real time with their classmates and instructor.

This is different than distance learning though, Reisberg said.

“A lot of distance learning doesn’t offer any opportunity for all the students to be together to talk with the instructor at the same time,” he said. “With the cameras, laptops, webcams, we can see each other, talk to each other.”

“It opens up what is possible,” Reisberg said. “It’s not face-to-face, but it’s virtual face-to-face.”