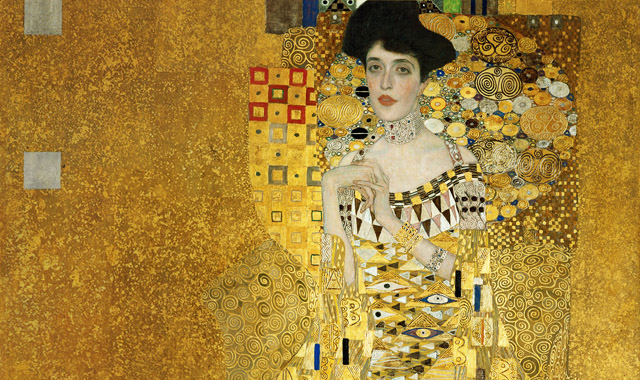 Maria Altmann worked for decades to reclaim five family owned portraits painted by Gustav Klimt for her family, including this portrait of her aunt,  Adele Bloch-Bauer. The painting had been shown in an Austrian art museum for years. Nazis had stolen the painting after Altmann and the Bloch Bauers had fled Austria during WWll.

The ambulance bumped along a nameless track south of Paris, creeping its way ahead of the Nazi advance in 1939, and sharing the road with refugees, horse-drawn carts and embassy cars.

Yet the ambulance occupant was not an injured soldier heading to a hospital. The passenger was smiling and wrapped in velvet. Da Vinci’s the Mona Lisa was the vehicle’s only occupant, aside from the curator assigned to protect the masterpiece for the duration of the upcoming war.

When the ambulance was opened at a country villa, the curator had fainted from lack of air – the van had been sealed to maintain a constant humidity level – but Louvre’s famous resident was just fine. Eventually, the painting returned to the Paris museum – after being relocated six more times – with most of the rest of the Louvre collection. Most of the other artwork in Europe was not as fortunate, noted Assistant Professor of Art and Design Heather Mathews. 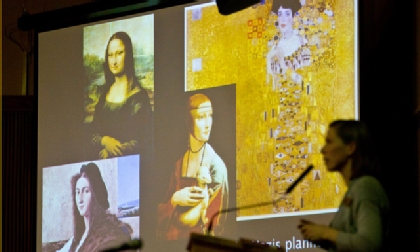 Professor Heather Mathews talks about the plunder of art during WWll by the Nazis during the 2012 Holocaust Conference. (Photo by John Froschauer)

She spoke last week at the Fifth Annual Powell and Heller Family Holocaust Conference where the focus looked at art theft by the Nazis and reparation to victims of the Holocaust.

In his keynote speech at the Lemkin Lecture Thursday evening,  Peter Hayes, the Theodor Z. Weiss Holocaust Educational Foundation Professor at Northwestern University, said that billions have been paid in reparations since the end of the war, with most of the payments coming from Germany. However, he acknowledged that thousands of victims never received any money, retrieved their property or belongings due to a process that took decades to resolve.

Hayes noted that there was an “optic of time” at play in the reparation saga. How we view the reparations issue now is very different from the world’s view in 1945 – when the population was still reeling from 36 million dead from war-related causes, 50 million homeless and a transportation and economic system that had collapsed in some nations.

“Most could not see the Holocaust amidst all the horror,” after the war, Hayes said. Reparations were addressed in the late 1940s and early 1950s. Four things had to change for a surge in reparations 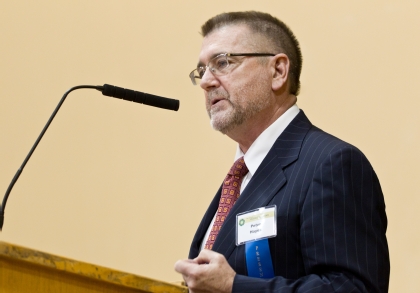 Professor Peter Hayes of Northwestern University talks about the long fight for restitution by those who suffered under the Nazis in WWll. Billions have been paid over the last decades, but it took the ending of the Cold War and the power of class action suits to bring justice for some heirs and survivors, he said at the Lemkin Lecture. (Photo by John Froschauer)

that began in the 1980s and in the 1990s, he said. The Cold War had to end, Germany’s economy had to revive, and the class action lawsuit had to gain clout in US courts. Finally, the view of the war had to change for survivors or their heirs to gain traction is the public eye as well as in the legal system.

This holds true for getting a monetary settlement, as well as regaining lost art treasures, Hayes said. And in terms of art, the Nazis conducted a decade’s worth of plunder and manipulation in the art world that was unprecedented, Mathews noted.

Before the Nazi’s began WWII in 1939, plans had been in the works for years to both control art – what was created and what was destroyed – as well as stealing art from galleries, Jewish collectors and patrons and national archives to create a mega-collection in Linz, Austria.

As the Nazis took power, they began to systematically purge German galleries of art in the 1930s that they considered offensive. In 1937, a showing of “degenerative art” went on display – which included works by Picasso and Matisse.  Some of the “degenerative” art was sold, other pieces were burned. A follow up showing of “good” art followed, which including statues of men – Arian men – shaped 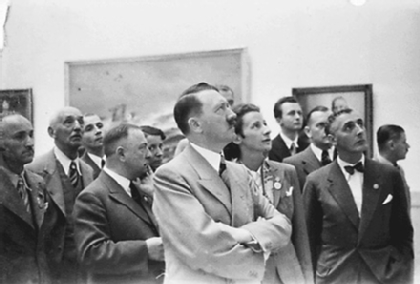 in the style of Greek gods, paintings of pastoral scenes, or of Hitler himself.

“Hitler ended up buying many of these paintings, because no one else seemed to want them,” she said.

These German art exhibits continued until 1941, with Hitler buying 200 pieces each year, using the proceeds he received from “Mein Kampf” according to “The Rape of Europa” a documentary Mathews showed clips of during her talk last week.

A lone US soldier guards plunder stolen by Nazis that was hidden in a German church. (Photo courtesy of National Archives)

Other Nazi leaders mimicked their leader in amassing huge art collections from seized Jewish estates and businesses, but none so much as Hermann Goering, Hitler’s second in command, who decorated his estate with thousands of pieces of stolen art. It’s estimated that as much as 20 percent,

with estimates ranging as high as 30 percent, of all the art treasures in Europe were stolen by the Nazis during WWII, Mathews said.

Families, including one with a Tacoma connection, have been trying for decades to get back artwork stolen from relatives who fled Europe, or died in concentration camps.

Maria Altmann, the niece of Adele Block Bauer (who was painted by Gustav Klimt in 1907) fought for years to have five Klimt paintings returned to her after WWII. 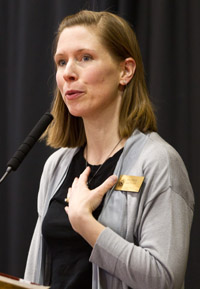 The Nazis stole the paintings after the Altmann’s and Block Bauers fled during the Nazi occupation of Austria. Altmann, whose son, Peter, lives in Tacoma, fought all the way to the U.S. Supreme Court and then in courts in Austria before the paintings were finally returned to her in 2006.“Portrait of Adele” now hangs in a Manhattan gallery after it was sold for $135 million in 2006. Maria Altmann died in 2011.

Attempts by family members to retrieve the art, even decades later, has been mixed, Mathews added.

Sometimes it’s a battle, like the case of the Altmann’s and other times, by happenstance, the turnover is quite civilized. That occurred in 2004, when a scholar researching stolen art happened upon a painting – “Les Amoureux Jeunes (The Young Lovers)” by Francois Boucherhat – was being shown in the Utah Museum of Fine Art.

Once the true owners  of  the painting made contact with the gallery, with little fuss, the painting was returned to  Claude Delibes and Suzanne Geiss Robbins, 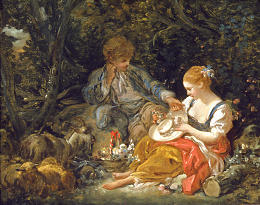 living heirs of French art dealer Andre Jean Seligmann. Robbins recalled that Seligmann had thrown Goering out of his shop before the war. When the Nazis returned, Seligmann’s gallery was one of the first looted by the Germans.

“We need to realize that these aren’t just pieces of art to these families,” Mathews said. “This represents something more.”

Many scholars believe that Hitler’s obsession with art came from his attempts to become a working artist in the early 1900s when he was around 19, only to fail at this endeavor, as well as his attempts to be accepted to the Vienna Academy of Art in 1908.  His portfolio sketches were rejected at the time as being mediocre. Hitler’s anti-Semitism may be traced back to this rejection, since most of the jurors at the time in the school were Jewish.

Most of the paintings he did manage to sell were bought by Jewish patrons.

According to the Rape of Europa clips, Austrian art museums do have some of Hitler’s original works on hand, but they are considered too controversial and rarely, if ever displayed.