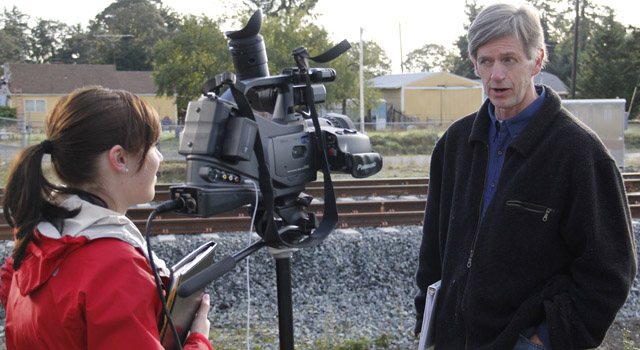 PLU student filmmakers have spent the last year researching the viability of improving rail infrastructure in the Pacific Northwest to help alleviate the problem of congestion.

Members of MediaLab – PLU’s student faculty research program through the School of Arts and Communication – were approached by the Canadian Consulate and the Cascadia Center to research the issue.

“It seemed like an important issue so we decided to take it on,” said chief videographer Linnea Anderson ’12. “We were given free reign in terms of who to talk to and the direction the film would take.”

They have traveled up and down the corridor to talk with politicians and experts in the field, including Washington State Senator Mary Margaret Haugen, Oregon Representative Nancy Nathanson, Bruce Agnew at the Discovery Institute in Seattle, and Dr. Anthony Perl at Simon Fraser University in Vancouver, B.C.

“People were brought up on trains before the car was made,” Anderson said. “Cities were built around train stations. Then, the car came along and people weren’t limited in where they could go, so our government stopped investing in passenger rail and starting investing in interstate highways.”

Our reliance on automobiles is part of the problem, according the team. With increasing populations and gas prices, and urban congestion becoming more extreme, now more than ever, North America needs to consider alternative transportation.

“Conventional passenger rail tops at 80 miles per hour while high-speed rail is 125 miles per hour and up,” said senior producer JuliAnne Rose ’13. “Revamping rail is one way to alleviate some of our transportation issues, but the key question is whether or not our area is right for high-speed rail.”

The five student team will reveal their findings in an original documentary, “Sidetracked: Redefining Rail,” set to premiere at universities along the Cascadia corridor, and at the Pacific Northwest Economic Region (PNWER) 2012 Annual Summit in July in Saskatoon, Saskatchewan.

“It’s been an eye-opening experience,” said Rose. “I never knew the complex issues that surrounded transportation investments in our country and how much public demand played into that.”

Anderson, a communication major concentrating in journalism, and Rose, a political science and global studies double major, are members of PLU’s MediaLab.

Established in 2006, MediaLab provides students with opportunities to explore various methods of mass communication. “Sidetracked” marks the eighth film produced by MediaLab, which has received national recognition for its work, including one Emmy Award and three consecutive Emmy nominations.