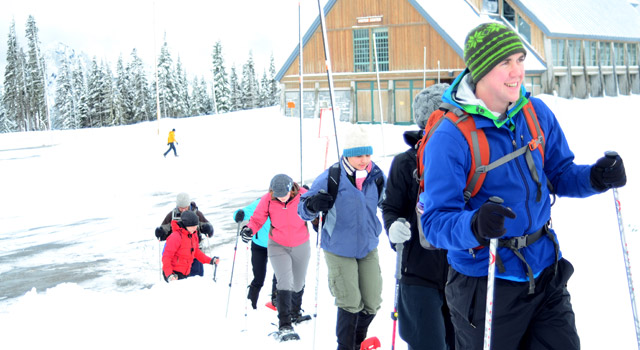 Tumbling head-over-heels down Mount Rainier — literally — isn’t how most students spend the Saturday before dead week, but nursing major Brian Hundtofte ’14 knew he was in for an adventure when he signed up to guide the snowshoeing trip to Panorama Point with Outdoor Recreation. The trip, an annual for the ASPLU – sponsored program, couldn’t come at a better time in the semester for students like Hundtofte.

While most of campus was still asleep Saturday morning, Hundtofte and a group of 10 other students snuck away from campus to escape the stress of finals and enjoy a day in the snow.

“If I hadn’t done this, I would have just studied in the library all day,” Hundtofte said.

Hundtofte was one of three guides on the trip, and while the group didn’t quite make it to the treasured lookout point, there wasn’t a shortage of oohs and awes.

After gearing up in the parking lot, the students, specifically Hundtofte, dived right into the fresh powder.

The sights were more reminiscent of somewhere more like Colorado, than Washington, according to one of the students.

“I love Mount Rainier. A lot of people in Washington don’t get to the snow that much, so it’s a fun opportunity to play in the snow,” said Business major Matt Leslie ’13, who was also a guide on the trip.

The group stopped to have a traditional Outdoor Rec lunch — which involves tortillas with some combination of summer sausage, cream cheese, sliced cheese, peanut butter, jelly, bell peppers, salsa, and chips, and apples, which are usually kept separate. Students are free to make their own concoction with the ingredients, but having a little bit of everything is definitely encouraged by the guides.

After lunch, the group decided to explore, venturing through fresh powder, and up and along ridges, where they found a spot to “sled.”

For Hundtofte, the sledding evolved into racing down the mountainside, until his snowshoe would get stuck in the powder, sending him flying head-over-heels downward and then to a halt.

“I like tumbling,” Hundtofte said rather matter of factly. “The snow doesn’t hurt.”

His ability to get right back up after his falls encouraged English and Global Studies double major Maylen Anthony ’16 and nursing major Nina Dam Pedersen ’14 to join in the fun.

Pedersen, a Denmark-native studying at PLU for just three-and-a-half months, said she’s set out to make the most of her short time here.

“I love the nature here,” Pedersen said. “Outdoor Recreation is a good opportunity to see a lot while I’m here.”

Outdoor Recreation will lead two more trips to Mount Rainier during J-term—a snow party on Jan. 5 and an overnight camping trip Jan. 12 to 13—as well as a skiing and snowshoeing trip in Montana during J-term break. Students can sign up for the J-term break trip this week during dinner in the UC. As with other weekend trips, students can sign up on weeknights, starting on Monday, before the trip.