Composing for the cannery: of boxcars, rhinos, and grapes

In 1973, a 17-year-old Gregory Youtz departed from Sea-Tac International Airport and landed in France. Meritoriously skipping the third grade, the young composer had afforded himself the luxury of a year in limbo – graduating high school a year early and giving himself time to explore before college.

In the dead space between high school and “higher learning,” potential itineraries sprawled like naked ledger lines in front of the road-bound youth, and he drafted an itinerary fueled by existential restlessness, and adolescent naivete, with his final blueprint formed with suggestions from both his parents and close friend, Krag Unsoeld, who would later join Youtz on his wanderings abroad. Youtz’s eventual route began with the accrual of a financial launch pad in Europe, and concluded with a Tibetan finale. It was time spent discovering and shaping his passions – music and China.

“First of all I wanted be an astronomer. Dad was a physicist. I grew up with telescopes and I still read Scientific American every month. I still follow that stuff avidly,” Youtz says. “I wanted to be a philosopher, I wanted be a historian, I love anthropology, of course I have no formal training in any of these.

“Music just kept pulling me back.” 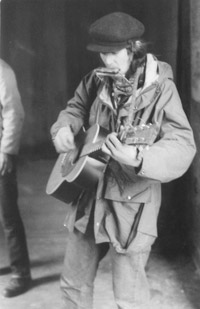 “My music is essentially dramatic, it’s story telling. Because I’ve spent so much time doing so many different things, I’ve spent a lot of time thinking about how these things relate, which means I spend a lot of time thinking about creativity, and that too is an outgrowth of all these crazy pieces of my life,” said Greg Youtz, professor of music.

Arriving in Champagne, Youtz signed on as an able-bodied migrant laborer, picking champagne grapes along the French countryside. Following four weeks of fieldwork, Youtz hitchhiked south with burgundy-stained digits, and stumbled into employment at L’Aigle (The Eagle), a ski resort nestled loftily in the Swiss Alps–outside of Geneva–where he “painted, plastered, and repaired things,” for further pecuniary backing.

Upon the arrival of Unsoeld in Switzerland, the duo pieced together a plan to ride local buses from Europe to Katmandu, lodging in dollar-a-night, backpacker hostels. Youtz recalls this leg as a blurred stretch of days assembled out of repeated steps–each morning beginning the same way, and ending at another disheveled, low-budget abode. They navigated their way amongst boisterous, agitated streets to bus stations where a “rickety, old, bus,” would pick them up along with, “40 Afghani villagers, and maybe some animals.”

They continued towards Katmandu, learning of worldly dissonances and bureaucratic exploitation.

Find out more about music and China by contacting Greg Youtz at 235-535-7619 and youtzgl@plu.edu.

Hustled by border agents at nearly every crossing, and robbed at knifepoint by bandits, Youtz says, “I trusted people I never should have trusted, but I mean this was the real world. It gets wooly.”

It was on this stretch that Youtz began discovering a compassion towards the global circumstance that would one day become manifest in the body of his work.

In Katmandu, Youtz and Unsoeld landed a gig housesitting for John Seidensticker who was, at the time, conducting post-doctoral research on tigers and jaguars in the Tibetan backcountry. Seidensticker, who is now the head of the Conservation Ecology Center at the Smithsonian’s National Zoological Park, subsequently introduced the pair to another survey tracking nearby rhino populations. Assisting in both studies, the duo surveyed the animals from treetop platforms, and outposts on the ground, where they learned how to predict and dodge rhinos–a species that “can be very ornery,” he says. This stint lasted around six weeks.

From there, the duo embarked on a series of hikes into the Nepalese mountains, each one lasting about three weeks and topping out at around 18,000 feet of elevation, a sublime conclusion to a sometimes meditative, oftentimes unsteady, and always worthwhile leave of absence.

Returning to the states with the beginning of Youtz’ exotic instruments collection, the two went their separate ways, and Youtz began his enrollment at Evergreen State College in Olympia, Wash. It was there, he says, that “a kid taught me how to hop freight trains,” which kept him busy for a solid eight years.

During the summers Youtz funded his education–which lasted a sprawling, indecisive six years–by working at the Seward Salmon Cannery in Seward, Alaska, where he eventually became the manager. Here Youtz, who is now a composer, and professor at Pacific Lutheran University, accessed a fundamental community in grounding his eventual creative form.

“It is too important to write music that the cannery worker could understand and appreciate. It has allowed me to not drift into the avante-garde,” he says, commenting most definitively on a politically inclined piece, entitled Drum Taps, which he premiered last May. “Artists must not consider themselves above their audience,” Youtz says. “It is terribly important they consider themselves a part of a community and that they serve that community. I think art should serve a purpose and that should be a purpose that people can understand.”

Youtz, who fittingly teaches a class called On Creativity, involves himself, additionally, in a wide variety of community engagements, including but not limited, to assistant teaching at the Tacoma Youth Symphony, and membership on a board for the building of a Chinese park on the Tacoma water front. “I’m all over the map,” he says, meaning this both literally and figuratively, as he is also the head of PLU’s study abroad programs in China.

“What makes me responsible is that I’m constantly trying to figure out how all of these pieces fit together,” and the convergent influence is apparent in his work.

“My music is essentially dramatic, it’s story telling. Because I’ve spent so much time doing so many different things, I’ve spent a lot of time thinking about how these things relate, which means I spend a lot of time thinking about creativity, and that too is an outgrowth of all these crazy pieces of my life.” With a chuckle he adds, “I would still hop a freight train, but my wife has forbidden me to do that anymore.”