On the rare cloudless days, from PLU’s campus, Mt. Rainier can be witnessed asserting its sublime dominance over the Pacific Northwest. The day I met Allison Stephens ‘01 was not one of those days, but its call could still be heard, muffled and resilient. She told me that she would be climbing the mountain in August and that she was apprehensive about it. She also told me that she has never done anything like this before. The summit would be attempted with nine other climbers from as far east as Michigan, four of whom are from Seattle, adding that the Seattleites have already been in contact, volleying email queries back and forth in the vein of, “so we’re really doing this?” 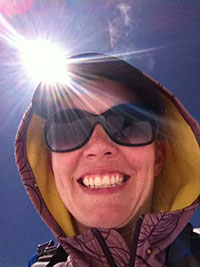 Allison Stephens ’01 will join a group of climbers to raise money for the Lutheran Volunteer Corps by climbing Mt. Rainier.

The group, having never met prior to this, was assembled on Facebook, by way of a recruitment message dispersed via the Lutheran Volunteer Corps–a domestic Peace Corps comparative. As soon as she saw the invitation, she says, she signed on. Out of the nine participants, eight are ex-LVC volunteers, and one is working for the program currently.

“Generally LVC alumnae help offer service to current volunteers,” says Stephens, who explains that that this involves things “like getting houses ready for them.”

Stephens attributes her continued connection with LVC to her church in Seattle, which she says is very supportive of LVC and its mission. She adds, however, that she has “never done anything this big before”. This, in her opinion, is a testament to the organization, and in mine, a testament to Stephens, who graduated from PLU with a degree in Social Work, and now works for the National Multiple Sclerosis Society in Seattle as its Director of Services.

During her year with the LVC, Stephens was placed in Chicago, working for a service called the Night Ministry, through which volunteers were dispatched in “huge busses that said Night Ministry on the side to go out and offer health care and sandwiches to people” in select neighborhoods. The organization, she says, at times also offered HIV testing.

LVC’s volunteer programs provide lodging, transportation support, and stipends for food and other necessities to their volunteers, who are stationed throughout the country, usually in major cities, and housed with four to eight other LVC volunteers. These house-groups are then put in contact with other ancillary non-profits or aid organizations, like Night Ministry, who determine the particular kinds of support services they will be involved in.

The climb, which is officially titled the Climb for Peace with Justice, is, as Stephens said, a step outside the ordinary for LVC service ventures. For the organization, which operates at a relatively low overhead, this fundraiser has the potential to bring in a substantial “chunk of change,” she says. Each respective member is expected to raise $4,300, netting the program nearly $40,000. Stephens says the outpouring of support she has received has been exhilarating. Much of her funding has come from her church in Seattle and workplace, where she says, “a guy who kind of knows about LVC gave a generous donation and is always asking me about how my training is going and giving me advice.”

Although the climbers are not experienced mountaineers, they have all been training weekly to get in shape. Stephens has been running 5Ks, she says, while another member is getting ready to run a half marathon.

“Knowing there’s a reason for this, it changes your mindset,” she says about training, “It’s not just working out, you’re working towards something.”

As far as the psychological aspect is concerned, Stephens says that, at first, she had “a ton of reservations,” “but not enough to stop me,” she adds quickly. Her parents, she says, were in denial at first, and “my sister thinks I’m crazy.” But the climbers will not be summiting alone. The project will be guided by Rainier Mountaineering Incorporated, a guide service with well-trained ascension custodians. The group will spend two days training, learning about technical ice and crampon climbing, and then hike from Paradise parking lot to Camp Muir, which is the usual starting point for climbers attempting to summit the mountain.

In the beginning, Stephens says that she would reach out to every new climber as they signed on asking, “so, what do you think?” But now that the group has been assembled, and she’s had some time to train, fundraise, and ultimately process, she’s got a new mantra.

“We’re all in this together.”