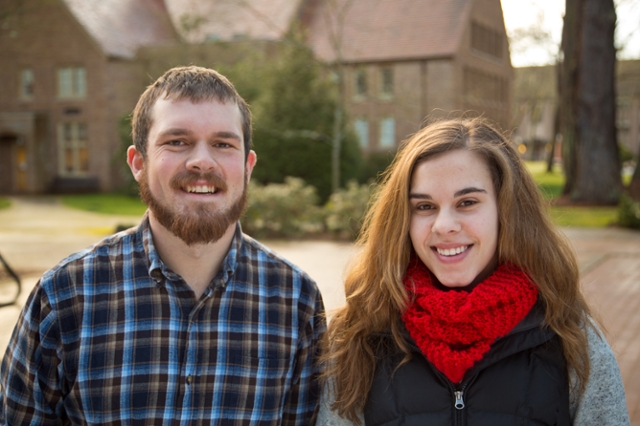 Dr. William Foege ’57 is a keynote speaker at the event

Two Pacific Lutheran University students fly off to Minneapolis the week of March 3 to begin fulfilling their dreams of someday working in the Peace Corps or working on peace-building missions overseas.

Andrew Larsen ’15 and Amy Delo ’15 will be representing PLU as the Peace Scholars for the 2014 Nobel Peace Prize Forum. While attending the three-day forum, held annually in Minnesota the last 26 years, the two will be listening to Nobel Peace Prize-winning speakers such as Leymah Gbowee, honored for her leadership in the nonviolent struggle for women’s rights and safety.

Larsen is a religion and anthropology double major, with a political science minor. Larsen spent the past year in Serbia studying peace and conflict resolution, and would like to work with youth when he leaves PLU. Delo is a political science and global studies major and is considering going into the Peace Corps or furthering her education through graduate studies in international relations.

They also will hear PLU alum Dr. William Foege ’57, who led the fight to eradicate smallpox in the 1970s and was awarded the Presidential Medal of Freedom by President Obama. Anna McCracken ’14, a 2013 Peace Scholar, will introduce Dr. Foege.

As a full sponsor of the Nobel Peace Prize Forum, PLU will Livestream the March 7-9 keynote addresses for the campus and community. The events are free and open to the public, and audience members can participate in the live Q&As following the addresses.

Here are the dates, times, locations and speakers:

“I like the fact they bring in speakers from business and science as well,” said Claudia Berguson, associate professor of Norwegian and Scandinavian Area Studies, who will accompany the students. Berguson is also the Svare-Toven Professor of Norwegian and Scandinavian Studies at PLU. Becoming one of the universities associated with the forum was one of President Thomas W. Krise’s priorities when he arrived at PLU. A five-college consortium—Augsburg, Augustana, Concordia (Moorehead), Luther and St. Olaf—established the forum in 1988.The forum is the only affiliation of the Nobel Institute in Oslo with colleges and universities in the U.S. Scholars from the colleges began attending the conference in 2011, and for the last two years, PLU has sent scholars, including McCracken and Bruno Correa ’15 in 2013 and, in 2012, Colin Mischel ’12, who majored in Norwegian and Scandinavian Studies, with a minor in peace and conflict dialogue.

This year, 19 students formally applied and wrote essays to compete for one of two slots at the forum, Berguson said.