Geosciences students take the classroom to the outdoors 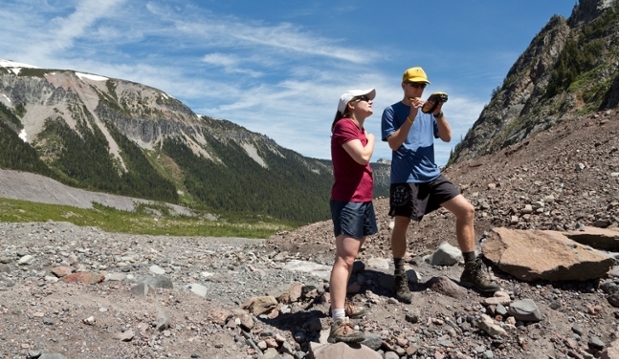 Professor Claire Todd and team of six students hiked up to a glacier at Mount Rainier to study the changes in the glacier due to climate change. (John Froschauer, Photo)

For one Lute, summer research is a prequel to Antarctica

This is one group of Lutes that really rocks.

While most students may have spent their summers indoors, working at internships or simply working, six geosciences majors spent June through August taking several hikes up to Mount Rainier to study climate change, the possible impacts of global warming and glacial runoff.

For Isaac Moening-Swanson ’15, this summer’s research is a precursor to a research trip he will take this fall to Antarctica. Once there, Moening-Swanson and Geosciences Professor Claire Todd will study the Tucker Glacier for possible signs of glacial retreat and the impacts of climate change. As on the other trips, Todd and Moening-Swanson will be heading out just after Thanksgiving, and return to PLU at the end of January.

This will be Todd’s third trip to Antarctica with a PLU student to study glaciers in the frozen continent, and her fifth trip to Antarctica overall.
The pair will be launching their research from the McMurdo Station – the main gathering point for all Antarctic expeditions and scientific research. Once at McMurdo, they will spend two weeks learning about how to survive on the ice, and then setting out for their research location.

On this particular day, Todd was not thinking about Antarctica, but relishing her team’s trips to Rainier.

“We’re using Mount Rainier to learn about glaciers in other parts of the world,” she said. “You really couldn’t ask for a better lab to study glaciers than Mount Rainier.”
The other five members of this summer’s team—Emily Knutsen ’16, Riley Swanson 15, Taylor Christensen ’15, Samantha Harrison ‘16 and Christina Gray ’16 —studied all parts of the glacier ecosystem around Rainier, including meltwater runoff, moraines (piles of rocks created by glaciers) hydrothermal activity, glacial retreat rates and a glacial modeling project.

The six came to their passion for geosciences through varying paths. Swanson said he was one of those kids who always collected rocks—and had boxes of them in his room when he left for college. Others were drawn into the field through a passion for volcanoes, the outdoors or the possibilities of field research in faraway places.  Although this summer research meant hiking 10 miles into the Emmons Glacier, Christensen said she loved the work, nevertheless, since she was outdoors for the research.

“Last year I was stuck indoors doing titrations all day long,” she laughed.

The group also got a little help with packing the gear up through the trails, scree falls and over rock from the veterans attending PLU, who came to mingle with their fellow students, enjoy the outdoors and teach the group a bit about field craft, such as map reading and rope work.

Swanson said that this year’s summer research really gave him a look into the scientific process and at “least a brief look at what scientists do in the field.”

Todd said this is key, since each student on her team developed their own research study on the Rainier Mount Rainier and had to deal with some data that was expected, as well as some result that were unexpected.

“It will help them deal with complexity and unknowns, and this can be applied to different parts of life, beyond the academic experience,” she said.

Some of the students will be using their research to provide the underpinnings of their Capstone projects, while others will be presenting their research during fall conferences, the Poster & Oral Presentation Session, Sept. 23 in the Morken Center for Learning and Technology, and subsequently during the M. J. Murdock Charitable Trust-sponsored Twenty-Third Regional Conference on Undergraduate Research of the Murdock College Science Research Program in November in Vancouver, Wash.

The Mount Rainier research was funded through a PLU Division of Natural Sciences and the Wiancko Charitable Foundation grant through the environmental studies program at PLU.